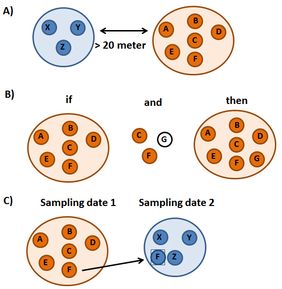 Schematic illustration showing how group composition was reconstructed. A) All samples that were found on the same day within 20 m of each other were assumed to be from individuals of the same group. B) If individuals A-F belong to one group and individuals C, F and G were found together at a different occasion, individual G was also assumed to belong to the same group. C) A transfer was assumed if an individual was found with one group and at a different occasion with another. (© Laura Hagemann)

In many primate species individuals coordinate their activities, share space and form groups. But how do groups form, how long can they exist and how often do individuals change groups? These are crucial questions to answer in order to understand a species' social system as well as its genetic structure. Groups should not be seen as isolated units but as parts of a coherent dynamic system. This system is characterized by formations of new groups, dissolutions of existing groups and individual movements between groups. Stable and dynamic elements complement each other and make up the social organization of a species. In order to gain insights into this complex system, several groups have to be observed over long periods of time. Especially in long-lived and elusive species this venture is very time intensive and costly and this is why only a small number of studies have been carried out for primates. Understanding social organization will however help to answer a number of questions ranging from disease transmission patterns to the social evolution of species, including humans.

Here I will describe how we succeeded in reconstructing group dynamic processes in a western lowland gorilla population taking place over more than a decade. And like the best stories, this one starts with a pile of dung. In brief: we used fecal samples collected during two time periods (2005-2007/9 and 2014-2017) as sources of DNA for genetic 'fingerprinting' and combined this with information on time and date of sampling to reconstruct groups and track individuals through time. With this method we could infer the fate and history of 144 gorillas, 17 mixed sex groups and 2 probable all male groups. The scope of the study was facilitated by combining published data (Arandjelovic et al. 2010, 2014) spanning the earlier time period with newly generated data spanning the later time period.

Western lowland gorillas are fascinating animals; they live in groups with one adult male and several adult females (one-male groups), are characterized by male and female dispersal, represent one of our closest living relatives and are recognized as critically endangered after the population was hit by severe Ebola outbreaks. Uni-male social organization is rare within primates, as is dispersal by both sexes and routine repeated dispersal by females.

Most information on western lowland gorilla social organization originates from detailed observation of single groups that were followed and accustomed to human presence and observations from platforms overlooking swampy forest clearings. From these efforts we know that groups can dissolve quickly following the death of the silverback but also slowly due to female emigration. Females usually transfer directly from one group to another during an intergroup encounter or after the sudden dissolution of their group of residence. Males, however, typically do not transfer directly but undergo a solitary period before they may form a group. Group formations are believed to take place when an adult male acquires at least one adult female. Non-reproductive groups (consisting of several adult males or adults males and sub-adult individuals) have also been observed. The rareness of groups containing multiple adult males is one striking difference in social organization between western lowland gorillas and mountain gorillas. We have limited information on how frequent dissolutions and formations of groups and dispersal events take place and how stable groups can be over time and in terms of their membership.

To acquire in-depth information on the group dynamics and stability of multiple western lowland gorilla groups over a 12-year period of time, we collected fecal samples within a roughly 100 km2 area in Loango National Park, Gabon. Our study area is bordered by a large lagoon on one side and the Atlantic Ocean on the other. This unique ecosystem contains a mosaic of habitats ranging from savanna and open costal forest to dense secondary forest and large swampy areas and makes up the habitat for a variety of species including western lowland gorillas, chimpanzees and elephants. The sampling teams were based at the permanent camps of the Loango gorilla and the Loango chimpanzee projects which are located on either side of our study area.

The detection of fresh dung across large, sometimes difficult to access areas is a challenging undertaking. We therefore relied heavily on the skills of indigenous BaBongo people from Waka National Park whose outstanding abilities in reading the signs of the forest allowed us to track ape groups in Loango. For three years, teams of at least two people searched the area for signs of gorillas, like knuckle prints on the ground or feeding remains, and tried to follow them towards dispersed samples on the forest floor or aggregations of samples at gorilla sleeping sites. Every evening gorillas build nests in the tress or on the ground to sleep in and often leave behind dung. These samples are of special value for us since all gorillas sleeping together at a nest site can be assumed to belong to the same group.

The gorilla DNA within the dung samples originates from intestinal cells that 'get stuck' when feaces pass through the gastro-internal tract. In these samples, there is very little DNA as compared to the amount one can get from a blood sample, and the DNA is degraded, making the genetic analysis ('genotyping') very similar to the work done when using forensic samples from a crime scene.

As expected, we found that some individuals were sampled multiple times, and so the 681 successfully typed samples came from just 98 gorillas. We compared the genotypes of these 98 gorillas to those of the 85 gorillas found between 2005 and 2009. We found matches across time periods, showing that 39 gorillas were present during both sampling periods. Another 46 were found in 2005-2009 only, meaning that they either died, left the study area or were missed during the 2014-2017 collection period. Another 59 were only found from 2014-2017 so these might have entered the study area or been born after the earlier period, or were simply not sampled earlier.

Our next challenge was to use the information on where and when the gorillas had been sampled to reconstruct the group compositions. Similar numbers of groups were found in both time periods: 10 mixed sex and two uni-male groups in 2005-2009 versus 11 mixed sex groups in 2014-2017. But were these the same groups? Which fraction of members needs to be present to postulate that a group still exists? Since western lowland gorillas live in uni-male groups, we assumed groups to be the same if the only adult male, the silverback and at least one other individual were found. By comparing genotypes we could do parentage tests to see if individuals had relatives within or across groups, and were thereby able to find 35 parent-offspring trios.

A good example of what we found using our data is seen with female LOG77. We reconstructed at least 17 years of her life: she was born before 2000 in group LayonA, transferred to GroupH were she was detected in 2005, 2006 and 2007 and gave birth to a son; before 2016 she transferred again to group Pink. Another example is male LOG8, who was found as a solitary silverback in 2005 and 2006, joined the all-male Group J in 2006 and was found to be the silverback of Group Green in 2014 where he sired a minimum of two daughters. The phrase "tell me your name and I'll tell you who you are" should actually be "give me your dung and I'll tell you who you are" - we found out quite a bit about the lives of the gorillas without ever seeing them.

Gorillas in Loango National Park live in a very dynamic social environment whereby a high degree of stability is possible at the same time. At the group level, we detected six group formations, five group dissolutions and 40 dispersal events of individuals within 12 years. Four of 17 mixed sex groups were detected for 8-12 years, and we inferred a minimum existence of 17 years for one of the groups. We even saw differences between time periods, with about four times as many female transfers in the earlier as compared to the later period. Questions for the future are the factors driving the dynamics of gorilla groups: could these be due to ecological factors or just chance? What is clear is that we can infer many of the secrets of multiple gorilla groups using crime scene technologies applied to DNA from dung, and that it is imperative to continue long-term studies to obtain the most powerful insights into the lives of these elusive animals.