Rapid Decline in the Largest Group of Mountain Gorillas 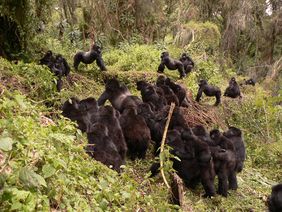 Pablo's group is the largest habituated group of mountain gorillas in the Volcanoes National Park, Rwanda, or anywhere in the world. The group was formed in 1993 and since then it has been regularly monitored. Its size far exceeds the usual range for the species, where the mean group size is normally 11.4 (Gray at al. 2005).

The group had gradually grown from 20 individuals in 1993 to its maximum size of 65 during 2006, but this exceptional size was maintained for only a few weeks before the group experienced a rapid decline over the following 8 months, after which it stabilized at 43.
This is the first time a group decline of this magnitude has ever been recorded in any population of gorillas. The initial decline commenced with an episode of infant mortality in the month immediately after the group reached its maximum size. Following this, an unusually high number of adult females transferred out of the group, including all of the females that had recently lost an infant. To a lesser extent, adult male dispersal and adult mortality also contributed to the decline.
Mountain gorillas live in social and cohesive groups led by one dominant male; other adult males, if present, are subordinates and play an important role in the group's protection and cohesiveness.
Pablo's group is a multi-male group including 5-7 silverbacks (adult males >12 years old) and 5-6 blackbacks (adult males from 8 to 12 years old). The number of adult females (females >8 year old) decreased from 20 to 10 when the group stabilized its size. The remaining proportion consists of immatures less than 8 years old.
When the group numbered 65 individuals (60 being independent travellers), unusual dynamics related to the large group size and consequent group spread were observed. As the size increased, the group as a whole became less controllable by the dominant male, and the formation of subgroups occurred at high frequency. The subgroups were always led by an adult male and were joined by varying numbers of females and immatures, and often followed by other adult males. Subgrouping is a rare behaviour in mountain gorillas and documented only in one case of male dominance change (Ndagijimana et al. in prep.), a fact that makes the observed events in Pablo's group a new opportunity in investigating social behaviour of this species. Such events can be explained by the changed role of subordinate males, in which they become extremely important to avoid an excessive group spread of vulnerable individuals, such as females and immatures. At the same time, the subordinate males began to initiate personal strategies for escalation in rank.
Most commonly, the main group was divided into two subunits ranging at short distances, with one led by the dominant silverback and one by the second-ranking silverback. On seven occasions the smaller group of 8-11 individuals, led by the beta-male, left the main group and moved as an independent subunit for several days (maximum 2 weeks) before rejoining the main group. The reunions were always peaceful, without conflicts between the two silverbacks. The same strategy was copied by the next-ranking silverbacks and once by a blackback as well. In all cases the subgroups rejoined the group after a few weeks.
The period of maximum instability that the group faced (associated with high frequency of infant mortality) was characterized by intra-group infanticide. Infanticide by a group member has been observed on only one other occasion in mountain gorillas, but in that case it was associated with the death of the dominant silverback (Watts 1989). In the present case, a young silverback, fourth-ranking in the male hierarchy, killed an 8-month-old infant and became very aggressive toward females. His ambition in forming his own group culminated after 7 months when he left the group followed by 4 females and one blackback.
Remarkable in Pablo's group has been the high frequency of female -transfers, after which the group reached the stable size of 43 individuals. The resulting group composition seems to have found a new equilibrium, though this was recently altered by the disappearance of 34-year-old Pablo, the second-ranking silverback, in July 2008. His presence and experience were crucial in the group's social dynamic, and his disappearance resulted in female competition for male proximity and in ranking escalation of the young subordinate silverbacks.
Despite its decline in size, Pablo's group remains the largest group of mountain gorillas, and it provides a unique opportunity to compare aspects of behaviour at different group sizes and composition.