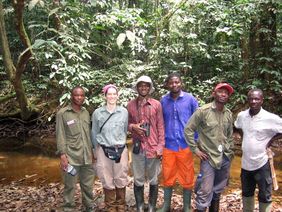 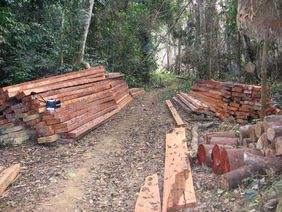 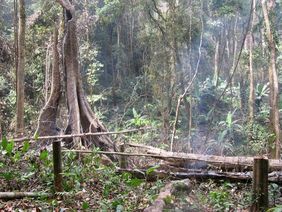 A newly burned farm clearing within the forest

The large Afi River Forest Reserve is an area of lowland forest and ridge forest that is thought to be rarely used by gorillas. In comparison, the AMWS and the Mbe Mountains have received relatively more conservation attention. In fact, the AMWS was created from the northwestern corner of the reserve, and was gazetted as a wildlife sanctuary (the AMWS) in 2000 for the protection of the westernmost sub-population of Cross River gorilla. This sanctuary also protects other endangered primate species, including the Gulf of Guinea Chimpanzee, and the drill. The Mbe Mountains also enjoy an increased level of protection via a community-based conservation initiative supported by the Wildlife Conservation Society (WCS) in Nigeria (see Gorilla Journal 30 and Gorilla Journal 36).
The neglect of the Afi River Forest Reserve, despite its importance as a corridor between the AMWS and the Mbe Mountains, has resulted in an increase in human activities there (such as farming, logging and hunting), and these have altered a considerable portion of the forest and may have isolated the gorillas there. Adding to this isolation of the Afi sub-population of gorillas has been the creation of a paved highway that passes between the Afi and Mbe Mountains. The long-term survival of the Cross River Gorilla in this part of Nigeria will ultimately depend to a large extent on their ability to have regular genetic contact with other gorilla groups, and the Afi River Forest Reserve is an important forest corridor that allows for such inter-group migration; the increase in human activities occurring there has resulted in destruction of some of the remaining forest, and the forest reserve is now seriously threatened.
In recognition of this, four NGOs (WCS, Pandrillus, Fauna and Flora International and Nigerian Conservation Foundation, NCF), working in collaboration with the Cross River State Forestry Commission (CRSFC), decided to conduct the first systematic survey of the Afi River Forest Reserve. Up to that point, there had been no systematic data collection on wildlife abundance or human pressures within the reserve. This lack of reliable up-to-date information meant that objective and effective management within the larger region was difficult. The survey's objectives were: