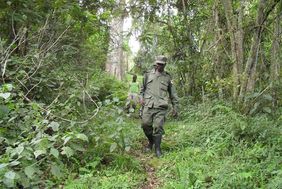 The Sarambwe Reserve Integrated Management Support Project ran from 2009 to early 2011. The project was funded by IUCN France and B&RD and implemented by the Congolese NGO VONA (Voix de la Nature)

The project targeted the villages of Mwiganywa, Ngoma, Mugandu, Rutukira, Kibanda and Sarambwe; a total population of 17,235 people. 377 of these local people benefitted directly from the project through employment or training in various activities.
Additional target groups were the Congolese Government and the Congolese Institute for Nature Conservation (ICCN). These institutions benefitted through various interventions, particularly training provided to their staff and assistance given in monitoring and protection.

Training in monitoring and ecotourism: Two training sessions in monitoring and in the use of GPS units were organised for the project staff in February and March 2010, financed by the Berggorilla & Regenwald Direkthilfe (B&RD). Six rangers and four trackers participated in the training. The most important topics covered were habitat types, collecting and saving geographical coordinates, the biology of the gorillas, and the use of compasses.
Organisation of a workshop on the management of Sarambwe: This activity was implemented during the first phase of the project. The workshop participants were drawn from all sections of Sarambwe society: representatives of the Rutshuru administration and of Kiwanja City, international NGOs and programmes (WWF, CARPE, IGCP), local NGOs and associations working in Sarambwe, a representative of the Pygmies, and ICCN staff. The 35 participants spent 3 days discussing issues concerning how to improve the management of Sarambwe.
The recommendations formulated at the end of the workshop were followed up during the remainder of the project, contributing to its success.
Establishment of a village committee for participatory management: Following the workshop, a committee was set up with the task of resolving conflicts and following up development activities in the vicinity of the reserve. On 30th May 2010 it was officially introduced to the ICCN, the local authorities and NGOs, and to VONA. The committee consists of 18 village representatives (including 4 women) and the chief of the village grouping.
Boundary planting: Three boundary trails, with a total length of 17.2 km, are already established along the southern, eastern and western border of the Sarambwe Reserve. The southern trail is 3 km long and runs along the Evi River; the eastern trail is 6 km long and separates the Sarambwe Reserve from the Bwindi Impenetrable National Park on the Ugandan side of the border; the western trail is 8.2 km long and separates the reserve from the community-owned lands. The western boundary turns to the east in an angle to form the northern limit of the reserve.
The eastern trail has been maintained twice. The western trail has only been cut for a length of 600 m and been maintained once. This latter trail was demarcated with 983 Erythrina abyssinica trees, 745 of which replaced seedlings that had been planted previously.
Establishing monitoring and patrolling trails: Ten east-west trails and one north-south trail (the so-called central trail) have been cut inside the reserve with a total length of 32,380 m (compared to the planned 28,000 m). This means that an extra 4,380 m has been cut, an excess of 15.43% achieved above the target.
Raising of forestry and agro-forestry seedlings in nurseries: Four nurseries are operating and have already produced 95,000 seedlings for forestry and agro-forestry use, allowing the small-scale reforestation of 24 ha and the cultivation of 65 ha with agro-forestry species. The local population, the target group of the project, selected the following trees for planting: Eucalyptus, Grevillea, Calliandra, Leucaena, cypress,Maesopsis and Markhamia.
Support for monitoring: To support monitoring in Sarambwe, the project issued funds to the ICCN for food for patrols. The project covered the rangers' food rations for the whole of the last year; the funds for the current year will be transferred.
Ugandans who had invaded the reserve - claiming that they were on Ugandan soil - were forced to abandon their fields in September 2010. Of the estimated 400 ha they had occupied, 350 are regenerating.
Several poachers have been arrested, resulting in a decrease of poaching in the reserve. As a result, the gorillas have become more visible and signs of their presence have become more widely distributed over the reserve's 980 ha.
Regeneration has to be monitored such that forest can be restored and the fauna can be maintained. The number of Sarambwe rangers has been reduced as the Head of the Sarambwe post also uses local trackers for patrols, but the trackers do not receive incentives such as allowances or food rations.
Construction of patrol posts: As stipulated in the original project document, B&RD has funded the construction of a Sarambwe ranger post. Construction started in November and was completed in early December 2010.
Provision of food rations to the patrols: B&RD funding provided the patrols with food rations until the end of December 2010. The provision of rations made it possible to conduct continuous monitoring of the reserve.

A total of 479 people from the local population have benefitted directly from the project. In addition, several local schools have received seedlings for their school gardens: the Kisharu primary school with 600 pupils, the Kasarabandwa primary school with 212 pupils and the Agricultural and Pedagogic Technical Institute of Kisharu with 200 students. The involvement of the local schools in seedling production has resulted in the establishment of school nurseries, an idea developed by the Initiative Brousse and WWF.
In order to determine how people have benefitted from the project, a short survey was conducted among 33 out of the 80 permanent workers. Their answers confirm that the project has helped them considerably:

The project has achieved 100% of targets for most planned activities, and exceeded 100% for the remainder. The infrastructure built up by the project, such as boundary plantings, monitoring trails, and tree nurseries, will continue to be used by the local population and the reserve staff. Thanks to the training they have received, the rangers, trackers and nursery attendants will be able to maintain their activities. The project has strengthened the relationship between the local population and Sarambwe Reserve, and it has prepared the ground for the establishment of school nurseries by WWF/PEVi (Environmental Programme for the Virungas).