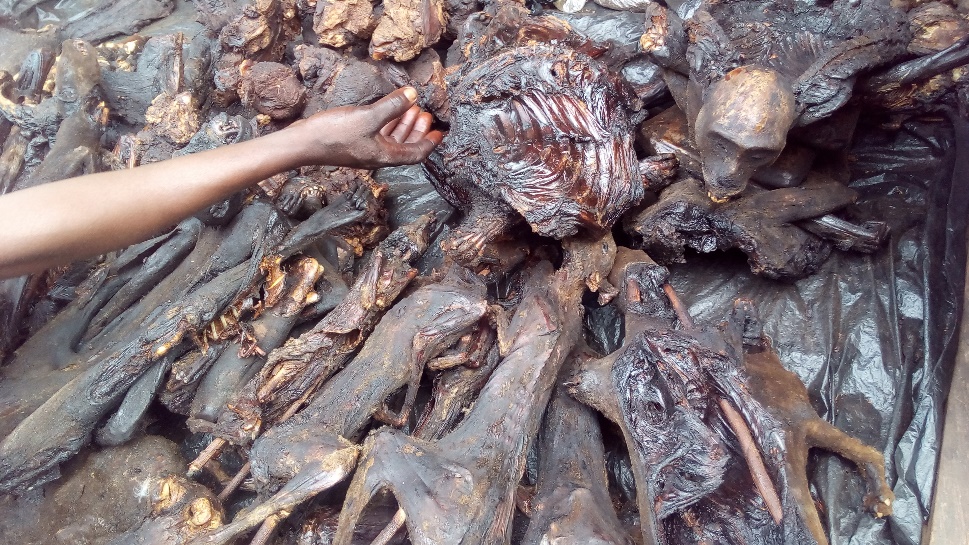 "Monkey" was one of the most popular types of bushmeat during our study of Nigerian markets. While some traders were aware of laws and hid protected species under the table, others displayed them without fear of reprisal. Despite many traders only identifying 'monkey' to the species level, the most common bushmeat were species of long-tailed monkeys. Also identified were pottos, baboons, drills, and chimpanzees. (© Tengwood Organization)

'Bushmeat' is a term used to refer to wild meat in Africa, where forests are referred to as 'the bush' and hence meat from the forests as 'bushmeat'. The terms 'bushmeat' and 'wild meat' or 'game meat' are therefore synonymous. Wildlife has long been relied upon for subsistence-level protein needs and every country has a long history of humans eating game or wild meats. In the present day, more developed countries enforce strict laws and regulations that limit the number of individuals hunted and harvested. Wild populations of game animals are closely monitored and wild meats are consumed with the sustainability of vulnerable animal populations in mind.

Food safety laws are also in place that follow guidelines overseeing hygienic handling, movement, and sales of meats. For example, in the EU, laws prohibiting the unregulated import of meats from third countries are a safeguard against the introduction of livestock diseases such as anthrax, tuberculosis, and many others that could threaten food security and human health if introduced to a country where these diseases are controlled or have been eradicated. However, in many less developed countries, biological monitoring systems to evaluate vulnerable populations of species are absent or not effective and laws to protect wildlife and food security, even when present, are not strictly enforced. For example, in West and Central African countries, meats are often sold in open markets, which have low hygiene standards and very little monitoring or controls of meats in place. Protected wildlife is openly sold with little fear of reprisal as enforcement of laws protecting wildlife is lax. The unsanitary conditions found in African markets are true of markets in other countries, including Asia, where COVID-19 is thought to have originated.

Coronaviruses are common worldwide and are present in a variety of species, causing respiratory, intestinal, hepatic or neurological symptoms that vary in severity. However, while viruses may make a host sick, they do not necessarily kill it; a good example is the common cold virus in humans. If a given virus killed every animal it encountered, it would be a very unsuccessful virus indeed - there would be no living creature left to carry it to the next individual.

Many animals co-evolve with viruses over centuries. After time, some viruses are even carried and passed along with only mild or inapparent symptoms and little sickness at all. However, when a virus which has been co-existing with one species suddenly has an opportunity to infect a new type of species it has never encountered before, it may act very differently in its new host; this is the theory behind COVID-19 in humans. Over time, in a new host, a virus may even mutate into a new form.

'Wet market' is a term used to describe markets where animals are being butchered and offered fresh for sales. Typically, living and dead animals are often found side by side in these types of markets; wild animals that would never encounter one another in nature often do. Wild animals, domestic animals, and humans are often thrown together into a dangerous mix. In the case of 'wet' markets, where animals are stressed and over-crowded, and humans are being exposed to blood and body fluids during the butchering process, conditions are perfect for a virus to jump to a new host.

Deforestation is another method in which viruses that have rarely been disturbed in their natural environment are exposed to humans. There are a number of newly emerging zoonotic diseases of particular concern that have recently made the jump from animals to humans, including swine flu, bird flu, SARS, MERS, and Ebola, all thought to be the result of species that would not encounter one another in nature meeting in a novel setting, such as a newly opened forest or a marketplace. Any country where wild areas are being destroyed and where these types of markets exist, is one in where the issue of wild meat is of concern.

In Africa and other less-developed, poverty-stricken regions which still have large natural areas, COVID-19 is beginning to take an additional toll on vulnerable wildlife. Outside of vaccination, the measures to control COVID-19 are similar to those that were used to control Ebola outbreaks; this includes nothing more than simple germ-avoidance techniques such as hand washing, social distancing, the use of masks and restriction of movement.

This worldwide restriction on movement has had an unexpected impact on conservation. For example, it has greatly reduced tourism in Africa. In places like Kenya and other African countries where tourism is well established and brings in substantial revenue, lack of travel has resulted in serious losses to the tourism industry, which includes loss of income for locals. As a result, Kenya has seen a surge in poaching that reflects this economic slump. This decrease in tourism and economic hardship has resulted in an increase in hunting as well as wildlife trafficking.

In other African countries such as Nigeria, which do not yet have an established tourism infrastructure, COVID has still had a substantial impact on the economy and livelihoods. Measures to control the pandemic have included increasing restrictions on the movement of goods, people and trade; many markets had to reduce their days of sales. While this limited the ability of bushmeat traders to buy meats from hunters and travel with them to more urban markets, therefore reducing sales, these restrictions also impacted humans in those areas where they live closest to nature. Restrictions on the movement of foodstuffs and travel have resulted in sharp increases in food prices coupled with losses in income. Those living near forests and other wild areas are now depending more heavily on natural food resources as a less expensive subsistence-level alternative.

What Happens Next: Lessons from Ebola in the Nigeria-Cameroon Region

The 2014 outbreak of Ebola in West Africa is a good case study for what is likely to happen once COVID-19 restrictions are lifted. During the outbreak, bushmeat bans were put in place that restricted sales of bushmeat. However, after the bans were lifted, the volume of trade gradually returned to normal.

A study of bushmeat traders and markets in Nigeria was carried out by the Tengwood Organization from 2016-2018 and data collection began not long after sales had begun to 'normalise'. Our study followed 73 bushmeat traders in 19 urban and rural marketplaces across Benue State and Abuja Capital Territories to determine a number of aspects of the trade, with our focus on the movement of bushmeat in markets (unpublished data).

For the majority of market traders (94 %), bushmeat trading was their livelihood and also a family business, one they had inherited, with a number of relatives working together over a span of generations. Interviews with these traders and their customers showed that many felt that animals are still plentiful in the forest and the majority of traders and their customers preferred the taste of bushmeat, with 80 % claiming that it is healthier for the body than domestic meats. Recent studies during the COVID pandemic have looked at the attitude of Nigerians and nearby Cameroonians toward bushmeat consumption and reveal a similar mindset; wild meat is a taste preference and considered healthier than other types of meat.

During the 2014 Ebola outbreak, public health campaigns designed to discourage wild meat consumption were largely ineffective because they contradicted the experience of people who have eaten bushmeat for years without consequences.

The Cross-Sanaga Region of Nigeria and Cameroon contains the entirety of the habitat of three very vulnerable primates: the Cross River gorilla (Gorilla gorilla diehli), the Nigeria-Cameroon chimpanzee (Pan troglodytes ellioti), and the drill monkey (Mandrillus leucophaeus), making the pandemic a situation that is critical for conservation efforts for these and other species in the region. Both chimpanzee and drill meat were found openly sold in some markets during Tengwood's study and other primates were commonly sold on a daily basis in all of the markets we studied. Similar to the Ebola outbreak, it is highly likely that as restrictions on travel are lifted, the market sales of bushmeat will return to former numbers. It is also likely that economic losses incurred during the pandemic will not resolve quickly and people will continue to utilize bushmeat to meet protein needs.

Complicating conservation efforts, the global impact of the pandemic on travel, jobs and livelihoods has resulted in even conservation organisations struggling to function and fund themselves in the sagging economic climate and the difficulties of travel. Of further concern, primates have proven susceptible to contracting COVID-19 from humans; a number of western lowland gorillas at Zoo Atlanta, Prague Zoo and San Diego Zoo recently tested positive for COVID-19, likely having contracted it from human caretakers. Transmission of COVID-19 to wild primate populations becomes a very real possibility in regions with vulnerable populations of primates.

Beyond Africa: Bushmeat and Emerging Zoonoses Are a Global Problem

For people living near wild areas, wild animals are an irresistible economic resource - they are often easily obtained and can bring in revenue when sold to traders or middlemen, who then carry wildlife and their products to urban areas and beyond. Before COVID, wild meat and many other wildlife products were being smuggled worldwide for easy profits. A study by Tengwood Organization in 2012 documented bushmeat confiscations in Swiss airports (see Gorilla Journal 48, June 2014). While much of the bushmeat confiscated by Customs agents was smoked or cooked, 36 % was fresh, bloody meat, slated for the European table - a perfect scenario for disease transmission.

What has happened with one virus could happen with another. There is evidence that the illegal trade in wildlife and wildlife products, while impacted by the drop in air travel, has not necessarily slowed down during the pandemic. A recent report looking at illegal trafficking in ivory and pangolin scales shows an increase as other routes of transport, such as cargo ships, are utilized.

In the earliest days of the global pandemic lockdowns, many people thought COVID-19 had a positive impact on wildlife. Feel good stories emerged on social media showing wildlife beginning to thrive without the presence of humans - as once busy areas turned quiet, wild animals began to emerge in places suddenly devoid of humanity. However, the reality of the situation for wildlife has evolved far away from this utopian ideal. Following the initial period of quiet, people have increasingly struggled as the global pandemic continues. Not surprisingly, this struggle is putting many vulnerable species at higher risk.

With the current global pandemic overwhelming economic resources, the issue of bushmeat consumption has largely been relegated to a waiting position on the sidelines of this crisis, despite the fact that issues surrounding wildlife trafficking and wild meat consumption are at the core of this pandemic. As travel and other types of COVID-19 restrictions lift and the world begins to return to "normal" for humans, the situation for wildlife becomes even more dire. Wildlife trafficking and the desire to eat wild meat remain at the centre of the problem.

EIA (2020): How West and Central Africa have become the epicentre of ivory and pangolin scale trafficking to Asia. reports.eia-international.org/out-of-africa

Meseko, C. et al. (2020): The bush meat trade thrives in Nigeria despite anxiety over coronavirus. Transactions of the Royal Society of Tropical Medicine and Hygiene 114 (9), 639-641