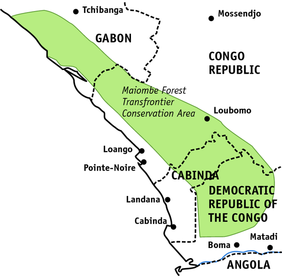 The Mayombe forest, part of the Guineo-Congolian biome, forms the south-western part of the tropical rainforest in the Congo Basin, and the southern margin of the distribution of a large variety of species of flora and fauna in Central Africa. The transboundary area of the forest is shared by Gabon, the Republic of Congo, Angola (Cabinda Enclave) and the Democratic Republic of the Congo. Following decades of still unresolved political and economic instability, and as a result of high population densities, the Mayombe Forest (at least 2,000 km2) and its ecosystem services are subjected to a high rate of degradation, mainly through heavy logging and poaching in all four countries. The forest is a biome of species of outstanding universal interest, such as two species of great apes: chimpanzee and western lowland gorilla.

Although the Mayombe Forest contains important biodiversity and provides critical ecosystem services, most of the forest is unprotected in law or practice. Three protected areas form part of the Mayombe Forest in the Republic of Congo: the Dimonika Biosphere Reserve, the Mont Bamba Forest Reserve and the Coukouati Reserve. The only protected area in the Mayombe forest in D. R. Congo is the Luki Forest Reserve. The only designated conservation area in Angola is the Cacongo Forest Reserve, which was established in 1930 for forestry purposes, but a plan to gazette a national park in Cabinda is well advanced.

The idea of looking at the conservation of the Mayombe ecosystem from a transboundary perspective was first advanced by the Government of Angola and UNDP in 2002. This idea received momentum in 2009 when UNEP and IUCN with financial support from Norway started to work with Angola, Congo and D. R. Congo to establish a transboundary protected area in the Mayombe landscape. An initial intervention from July 2009 to June 2010 helped reinitiate a dialog and arrive at political consensus among the three states. Several baseline studies were initiated to improve knowledge of the political, socioeconomic and environmental context in the three countries. The main results from this initial phase are as follows: (1) the tripartite agreement signed by the three ministers in charge of forests in D. R. Congo, the Republic of Congo and Angola to establish a transboundary “platform”, (2) the endorsement of the initiative and (3) the signature of the Cabinda declaration by the three ministers. Since then, the different organs (regional committee, national committees) have met, and accompanied the implementation of a number of scoping studies on potential landscape corridors, legal framework for a transboundary biosphere reserve, and socio-economic situation. The results of these technical studies were consolidated in a draft transboundary plan. The technical work was validated at an expert meeting in January 2012 in Luanda. The ministers met the following day and committed core funding to the interim secretariat which is based in Pointe Noire, Congo. Next steps will be the formal adoption of the transboundary plan and fundraising for the implementation of the transboundary plan. The meeting in Luanda was attended by Gabon and there are deliberations on how to include Gabon in the process.