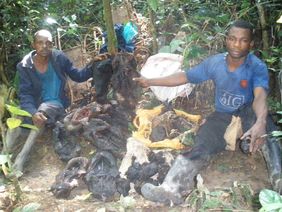 Poachers arrested in the park (© ICCN)

As part of the monitoring activities taking place In Maiko National Park during the festive period, between Christmas 2011 and the New Year, extensive patrols were carried out over 40 days in all three sectors of the park: the northern, the central and the southern sector. Before the patrol staff went into the field, sensitization meetings were organised between the Park Administration and the Frankfurt Zoological Society (FZS), and with the various stakeholders, to prepare the ground. The patrol had the following objectives:

During the second half of June 2012, four patrols were conducted in the three sectors: one in the northern sector, one in the central sector and two in the southern sector. The patrols stayed in the forest for 10 days, sleeping in tents during that time.  For this purpose, the teams were equipped with a number of Law Enforcement and Monitoring chits, a GPS, a camera and camping equipment.

The patrols made interesting observations on the fauna and the threats facing the fauna, in all the areas covered. A total of 63 rangers participated in the patrols which covered 38 quadrats of 5 km2 in the park and the buffer zone.

Human activities discovered during patrols: Major threats to the integrity of the national park are the presence of armed bands and the exploitation of minerals (gold and cassiterite) within the park and its buffer zone. The latter activity usually involves the installation of semi-permanent mining infrastructure inside or near the park – which results in a plethora of illegal activities such as poaching using traps, guns and automatic rifles. This has resulted in a flourishing trade in trophies, bushmeat and live animals to the detriment of the fauna and causing habitat destruction and water pollution.

Observations of animals and corresponding threats: Animals were observed directly, or their presence was recorded indirectly through tracks, dung, nests, vocalisations, burrows, etc. In a forest ecosystem like Maïko, data on the occurrence of large mammals are usually obtained from their tracks, dung and nests. Of the key species, elephants and chimpanzees were observed in the northern and central sectors, while signs of okapi were found in the northern and southern sectors. Signs of hippopotamus and buffalo were found frequently in all three sectors. No signs of gorillas were found in the areas covered by the patrols.

Unfortunately, there are not enough data on the distribution of species and human activities to permit statistical analysis. However, as is clear in the southern sector, the more permanent settlements and mining camps there are, the less often you see signs of animals.

The continued presence of armed bands within the park poses a major challenge to the continuation of monitoring activities and to the ecological survival of the park in general. Based on the results of this extensive FZS-led patrol the following observations can be made:

We recommend the continuation of patrolling activities, specifically four patrols of 10 days each with a total of 63 rangers participating and covering the three sectors. Another lengthy interruption in patrolling activities could negate the effort and resources applied to date. We urge the partners of Maïko National Park to support implementation of the park’s management programme.

We would like to express our sincere thanks to FZS who provided the rangers’ rations during the 10 days on patrol, and generally for implementing this activity with funds provided by Berggorilla & Regenwald Direkthilfe. We sincerely thank those local authorities whom we contacted in order to resume protection activities. In particular, we commend those brave Maiko rangers who have resumed patrols with great motivation even after their work had been suspended for over one year.