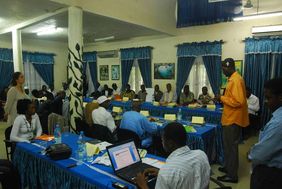 His Majesty the Paramount Chief of Ndokbiakat (the Ebo region) addressing delegates at the first Ebo Chief’s meeting, in June 2011 (© ZSSD/Abwe Abwe)

An isolated population of gorillas lives in the Ebo forest, Cameroon, between the Cross River gorillas and the western lowland gorillas south of the Sanaga river. These gorillas are a relict and intermediate population of what might once have been a much more continuous distribution of gorillas over this region. The Ebo forest is one of the most important remaining tracts of closed-canopy forest between the Cross and Sanaga rivers and contains one of the most functionally intact populations of forest mammals in this region. It has been highlighted as an “exceptional priority site” in the Nigeria-Cameroon chimpanzee regional conservation action plan.

The Ebo Forest Research Project (EFRP), part of the Zoological Society of San Diego’s Central Africa Program, has been managing permanently-manned research stations in the Ebo forest since 2005. Today, two stations, on the west and east sides of the forest, act as bases for deterring hunting activities, monitoring the threats to wildlife, monitoring primate populations themselves, and as bases for scientific studies on primate and other species.

We know that the gorillas only exist in a relatively small (c. 25 km2) area of forest in the north-east of Ebo, within 5 km of the villages of Iboti and Locndeng. This part of the forest is only partially contained within the boundaries of the proposed Ebo National Park, and partly within what is due to be classified as the “Yingui Council forest”. It is not clear why the gorillas have chosen to live in this area when the central part of the Ebo forest would seem to be more appropriate, and a more targeted study is needed to elucidate the factors determining the distribution of gorillas.

Our research efforts have focused on determining the distribution (using nests and other signs) and feeding ecology of Ebo gorillas using faeces, as well as enabling genetic analysis from faecal samples. Between January 2010 and September 2011, we recorded 666 gorilla nests within 107 nest groups, ranging in number between 1 and 33 nests. Since 2009, more gorilla signs have been observed outside the proposed Ebo National Park boundary, and only a few kilometres from Iboti and Locndeng villages. Between January 2010 and January 2011, 199 faeces were collected for feeding ecology studies and samples were taken from 43 fresh faeces for future genetic analyses. During this period, gorillas were observed opportunistically on only four occasions.

As a result of our studies to date, we believe there to be fewer than 25 individual Ebo gorillas remaining, and our best estimate is 15–25 animals. Tracking the gorillas is currently not possible, due to the rockiness of the forest and the lack of tracking knowledge. We are also reluctant to exert undue pressure on the remaining gorillas, and prefer to gather information from secondary sources, such as nest sites and faecal samples.

From the initial establishment of our research station in April 2005, the EFRP has been working closely with communities, who were initially hostile to our presence and activities but have gradually begun to understand our work and start to respect and collaborate with us. We engage local community members as porters, monitoring staff, and team leaders. From 2010, we began seeking ways for traditional rulers in villages adjacent to the Ebo forest to be actively involved in the conservation of this forest. This culminated in the first ever meeting of traditional authorities from villages around the Ebo forest, which was held at the Limbe Wildlife Centre in June 2011. During the three-day workshop, which was attended by 20 traditional rulers and three village elites, the biological riches and threats faced by the Ebo forest were explored, and the role traditional authorities currently play and could play in biodiversity conservation were discussed, as well as the Cameroon Wildlife Law. By the conclusion of the workshop, it was clear that the traditional rulers had became increasingly committed to conserving their rich heritage. They promised to

Copies of gorilla information posters which were produced with funds from Berggorilla & Regenwald Direkthilfe in 2010 were distributed to the traditional authorities at the meeting, and later in the villages. At the request of the traditional authorities, a series of sensitisation meetings were organised in all villages around the Ebo forest between November and December 2011. These sensitisation meetings, which were attended by around 1000 community members, were chaired and facilitated by the traditional rulers themselves. At the end of the meetings, the traditional rulers and communities resolved, among other things, that the decree creating the Ebo National Park should be signed by the Prime Minister without further delay and that if necessary they would meet the Prime Minister to push through the Ebo National Park dossiers, and that they would create anti-poaching committees in each village to check all illegal hunting activities.

One other recommendation of Ebo traditional authorities is the promotion of sustainable alternative income and protein sources in their communities where the mainstay economic activity is bushmeat hunting and trade. Based on needs expressed by the two communities (Iboti and Locndeng) the EFRP has been supporting and working with local common initiative groups to establish poultry, piggery and cocoa farming in small demonstration projects. In each village, groups were given either high yielding cocoa pods and 2000 polythene bags to start a cocoa nursery, one male and three female piglets or 100 chicks. We are carefully monitoring the success of these projects, both in terms of the health and reproduction of the animals and cocoa, but also by monitoring attitudes and activities of members of the common initiative groups, who include hunters. To date, the cocoa and piggery projects seem to be thriving, and the pigs have adapted well to the local food conditions. Conversely, the poultry project has already failed. We and the communities are already learning valuable lessons, and we foresee that these small demonstration projects have the potential to ameliorate some aspects of day-to-day life in the villages, while emphasising the need for the impetus and development of these initiatives to come from the village itself, not the EFRP.

In addition to this small-scale livelihood initiative, the EFRP in consultation with local communities has devised a new strategy for gorilla conservation: Club des Amis des Gorilles (CAG, Gorilla Guardian Clubs) in the villages closest to the small gorilla population. Whilst still at the preparatory and consultation stage, these clubs will have the overall goal of conserving the high biodiversity of the forest, but will target flagship species, particularly gorillas, chimpanzees, drills and Preuss’s red colobus, each of which have a deep cultural history and tradition with the communities. This is particularly important given the current unprotected status of the Ebo forest, and the fact that there are currently no Ministry of Forestry and Wildlife officers posted to this large area, and therefore no systematic law enforcement efforts on the ground.

We envisage that once the CAG goes fully operational in each community, members will voluntarily adhere to the club rules and each will have a membership card. The club will meet regularly to update members on gorilla conservation issues. Three-week cycles of community-based monitoring of gorilla range and human threats will be carried out by two club members (hunter/ex-hunters) and at least one EFRP staff member. During monitoring, information will be collected on indirect signs of gorillas, including nest number, locality, constructions and faeces, with GPS readings, photographs and age class determination (in order to develop a map of Ebo gorilla localities). The monitoring teams will also collect data on all signs of human influence in the gorilla range, to monitor the level of threats over time.

Eventually, we hope to achieve a consensus on the way in which the communities can further protect the gorillas, such as by establishing and enforcing a “no-go” area for hunters encompassing the gorilla range, which will be possible through the development of participatory mapping developed in the coming years. Such large conservation commitments by communities will be impelled through informal three-weekly meetings at the community level, as well as general assembly meetings held quarterly.

We also intend to promote pride in the Ebo gorillas in the communities adjacent to the gorilla range, and have a number of ideas to develop this important aspect of conservation. We plan to reserve a section of our quarterly newsletter Ebo Forest News for news from the “Club des Amis des Gorilles”, hold an annual “Coupe des Gorilles” football tournament between many villages in the Yingui area, and develop an annual Club des Amis des Gorilles calendar with photographs from the project.

One other piece of news hot off the press is that the Ebo gorillas will be included in the next IUCN-endorsed Conservation Action Plan for Cross River gorillas, which is currently being drafted. The Ebo gorillas will be assessed separately from the Cross River gorilla sub-populations on the Cameroon–Nigeria transboundary region, but including the Ebo gorillas within this Conservation Action Plan is appropriate given the small and isolated nature of the population. We hope that these efforts will also help national and international awareness-raising of the existence and threats faced by the Ebo gorillas, and efforts underway to conserve them.

The Ebo Forest Research Project works in conjunction with the Government of Cameroon (MINFOF and MINRESI) and with WWF and WCS. This work is possible due to support from the Zoological Society of San Diego, Offield Family Foundation, USFWS Great Ape Conservation Fund, the Arcus Foundation and the Margot Marsh Biodiversity Foundation, to whom we are extremely grateful. We also thank Berggorilla & Regenwald Direkthilfe for supporting the production of village-specific Ebo gorilla posters.