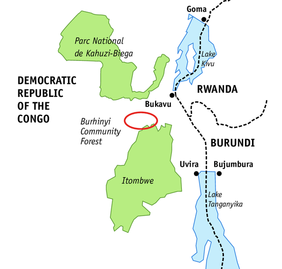 The Burhinyi Community Forest, located in the South Kivu province of eastern Democratic Republic of the Congo (DRC), is one of several patches of tropical forest located between the Kahuzi-Biega National Park and the Itombwe Natural Reserve. Both are natural homes of numerous endemic, endangered and protected species of animals, birds and plants, including the eastern lowland gorilla, Gorilla beringei graueri, and the chimpanzee, Pan troglodytes schweinfurthii. The location of the Burhinyi Chiefdom is 27° 33' to 28° 46' E and 2° 54' 03"– 2° 54' S. The communities in that area are Bashi and Barega; the forest is located in Mwenga territory.

Recent field expeditions conducted in the Burhinyi Community Forest have confirmed that groups of gorillas and chimpanzees inhabit this non-protected forest, which is “managed” by local communities according to traditional views and uses focused on natural resource exploitation. These communities exploit forest resources and engage in slash-and-burn agriculture to survive, a situation exacerbated over the past 15 years as they have become increasingly impoverished by ongoing armed conflict in the region.

Given the penury of data regarding the Burhinyi Community Forest and the great apes inhabiting it, as well as the vulnerability of the forest to human pressure and the plethora of threats to its great ape population, Strong Roots, a Congolese nongovernmental organization, organized a research expedition to the forest in March 2012, following previous meetings with local and traditional authorities in the Chiefdom of Burhinyi. The objective of this expedition – conducted by a team of socioeconomic surveyors trained in development and sociology, primatologists, and botanists – was three-fold: first, to gather definitive evidence of great apes’ presence and preliminary information about their habitat; second, to better understand the socioeconomic context of communities living in and around the forest; and third, to ascertain the ways in which communities exploit the forest and their views concerning its conservation.

The presence of gorillas and chimpanzees in the Burhinyi Community Forest has been confirmed by two independent groups of researchers. During the course of recent field research focusing on rodents conducted by the Centre de Recherche en Sciences Naturelles (CRSN) de Lwiro in collaboration with the Chicago Field Museum, 26 chimpanzee nests were identified. The March 2012 research expedition led by Strong Roots also identified and photographed chimpanzee nests as well as three gorilla nests (one terrestrial and two arboreal) and collected gorilla droppings.

There is no formal conservation policy that governs exploitation of the Burhinyi Community Forest, with the important exception of a ban on hunting great apes and baboons imposed by the traditional ruler of the chiefdom, known as a “Mwami”, in 2010 and designation of a sacred area in the forest where access is forbidden without the consent of traditional authorities. Gorillas are also reported to inhabit this sacred area, known as Rwaga Mountain. When community members were asked how they traditionally protect the forest, several measures were cited, including not cutting down trees in a “disorganized fashion” (trees should only be cut if they will be exploited in their entirety), not clearing forest land by burning, and not hunting pregnant animals, among others.

While local initiatives for protecting the forest exist, they fall short of comprehensively protecting great apes and their habitat. Despite the purported traditional prohibition on clearing forest land by burning, researchers found widespread evidence of this practice to clear land for new homes and farms, particularly in the densest sections of the forest. Most alarming, community members in the groupement of Cirere reported having killed 50 gorillas prior to the hunting ban imposed by the current Mwami because they had become so numerous that they were believed to represent a threat to the population.

Thus, at the same time that local communities possess important traditional knowledge relevant to biodiversity conservation, anthropogenic pressure also poses serious threats to many species, including those totally protected by national and international law, such as great apes. This is due to two principal reasons:

According to a multidimensional poverty index based on socioeconomic indicators in six areas (demography, education, housing, health, and food/economic security), the rate of poverty in communities living in and around the Burhinyi Community Forest is 57%, with 19% of households living in severe poverty. The high poverty level of forest communities has a direct impact on the types and degree of human pressure that the forest and its great ape population confront, as illustrated by three aspects of the socioeconomic context: livelihoods, health, and education.

Nearly all livelihood activities in forest communities depend upon exploitation of forest resources, and the high population growth rate (average household size is 7.1 persons) means that this will take an increasingly large toll on great apes and their habitat in the decades to come. Agriculture and animal husbandry are the two most important livelihood activities and are practiced by 96% and 69% of households, respectively. The wide practice of agriculture poses a particular risk to the forest and its great ape population because farmers engage in slash-and burn tactics. Other livelihood activities include exploitation of timber and non timber forest products, hunting, artisanal mining, and craft production.

Lack of access to both health care and education are critical problems in forest communities. 45% of households surveyed have one or more members who are chronically ill, and the rate of child mortality is 23%. 49% of household heads surveyed have never attended school. Furthermore, 53% of households have one or more school-age children who are not enrolled in school, and 30% of households have three or more school-age children who are not enrolled. The high disease burden augments household poverty at the same time as anthropozoonoses pose an epidemiological threat to great ape populations that share their forest habitat with surrounding communities. The low level of education further perpetuates poverty and thus increases the long-term likelihood of irrational exploitation of forest resources to meet household needs and the associated risks to great apes.

Protection of Great Apes and Role of the “Community Forest” Approach

While the objective of the Congolese government is to extend the size of protected areas to up to 15% of the national territory by 2020, recent research on Protected Areas Management Policies in the Democratic Republic of the Congo has found that this objective is hindered by conflicts between protected area managers and the surrounding local and indigenous communities. These conflicts exist in large part as a result of the inappropriate approaches used by the government to establish existing protected areas. In the case of Burhinyi, when asked about the role that the government should play in protecting their forest, community members were emphatic that it should not impose “integral conservation” of the forest – their sole livelihood source – by establishing a national park or a forest reserve. They insisted that conservation of the forest should remain the prerogative of local leaders and communities who have “managed” this forest since the time of their ancestors and that the role of the government or other external actors should be limited to providing targeted assistance to help them protect their forest.

Given the lessons learned from the establishment of existing protected areas and the viewpoints of forest communities such as those in Burhinyi, the “Community Forest” approach is the most feasible manner to extend the size of protected areas in Congo and better protect great apes living in forests currently designated as non-protected. This approach implicates communities in the design and daily management of the forests on which they rely for subsistence. The main limitation of this approach is that legislation does not yet exist in Congo to establish or regulate community forests, with the exception of a few sentences that reference forests on which communities rely for subsistence in the Forest and Mining codes. Lack of skills, knowledge and limited community empowerment in the field of conservation and great ape protection are additional obstacles that must be addressed for the “Community Forest” approach to be realistic and successful.

There is an urgent need to undertake comprehensive biological surveys, further assess the impact of human activities on fauna and flora, and develop an appropriate community-based conservation strategy for the Burhinyi Community Forest. Strong Roots has released a Concept Note calling on stakeholders to contribute to the long-term conservation of the forest and its great apes; key activities proposed to achieve this aim are forest mapping, estimating the abundance of the great ape population, and designing a comprehensive forest conservation strategy in collaboration with and to be implemented by local communities, including a Great Ape Monitoring Team to collect data on a daily basis and a Community-Based Conservation Committee that will work to assure the long-term preservation of the forest. These activities will be complemented by animal husbandry and community health projects, as well as Environmental Education activities catered to local communities and schools. This initiative will provide the forest-dependent communities of Burhinyi with the knowledge and skills necessary to engage in rational management of forest resources, as well as economic alternatives to the abusive exploitation of these resources

The Burhinyi Community Forest is the first non-protected area in the South Kivu Province where local communities are intending to apply scientifically-grounded conservation policies in concert with traditional knowledge and practices in order to protect great apes. The intent of this pilot project is to assure the long-term preservation of the Burhinyi Community Forest and its great ape population using a community-based conservation model that can be replicated in other non-protected forests in the Congo Basin region. This project will also provide the DRC government with incentives and tools to create relevant legislation for Community Forest management and achieve its 2020 objective of extending the size of protected areas to 15% of the national territory.

This research has been realized thanks to a grant from the Indigenous Leaders Conservation Fellowship Program awarded to Dominique Bikaba by Conservation International. We are particularly indebted to Mwami Chirhulwire II Richard and all the local authorities who participated and mobilized their populations for the meetings and surveys that permitted us to collect this information. We are also grateful to Papy Cimalamungo and David Mushagalusa for contributing to this research.