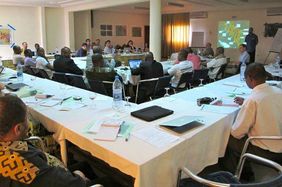 In 2007 IUCN published a five-year (2007–2011) regional Action Plan for the conservation of the Cross River gorilla Gorilla gorilla diehli (Oates et al. 2007) outlining recommended actions that stakeholders believed if implemented would make a significant difference to the survival of the Cross River gorilla. Over the last five years the Action Plan guided efforts to improve the conservation status of the population. To ensure that future conservation strategies and actions are up-to-date with, and effectively address current threats and conservation challenges a review and revision of the existing Action Plan was necessary. From 22–24 February 2012 international scientists, conservation managers, representatives of funding institutions, government officials of the two range states – Nigeria and Cameroon – and other stakeholders met in Limbe, Cameroon to review the 2007 plan and develop a new one for the next five years (2012–2016). The workshop, organized by the Wildlife Conservation Society (WCS) with funding from the U.S. Fish and Wildlife Service (USFWS) and United Nations Environment Programme – Convention on Migratory Species (UNEP-CMS), was attended by over 40 participants representing international and local conservation organizations, government agencies, and institutions including WCS, USFWS, World Wide Fund for Nature (WWF), International Union for Conservation of Nature (IUCN), Ministry of Forests and Wildlife of Cameroon (MINFOF), Federal Ministry of Environment of Nigeria (FME), Nigeria National Parks Service (NNPS), North Carolina Zoological Park (NC Zoo), UNEP-CMS, Fauna and Flora International (FFI), Media Impact, the Last Great Ape Organization (LAGA), San Diego Zoo and Pandrillus among other NGOs, community-based organizations, and government institutions.

The specific objectives of the workshop were:

Implementation and Impact of the 2007 Plan

Overall, a high level of success was achieved in the implementation of actions recommended in the 2007 Action Plan. These recommendations fall under two categories. The first categoriy are those that were taken across the Cross River gorillas’ range and site-specific ones. Among the most effective implemented range-wide strategies and actions are:

Site-specific actions recommended in the 2007 plan that were successfully implemented and effective include improvement of protected area infrastructure and law enforcement, upgrading of the protection status of certain sites, and development of community-based land-use plans.

Workshop Outcomes and the Future of the Cross River Gorilla

Based on an intensive review of the 2007 Action Plan and examination of recent research results participants at the workshop have formulated a set of priority actions that would be implemented over the next five years to improve the conservation outlook of the Cross River gorilla. Successful implementation of the new set of recommended actions and ultimately the conservation of Cross River gorillas depends on the commitment of all stakeholders – local, national and international. With stronger will and commitment of the governments of both range countries, increased community support, and sustained donor support it is hoped that implementation of the actions recommended in the revised Action Plan will have significant impact on the survival of Cross River gorillas. At the end of the highly fruitful meeting participants dispersed with a better understanding of the threats and challenges impacting the survival of Cross River gorillas, but also with a reinforced vision for the future for these gorillas, a future where Cross River gorillas are better understood, better protected, more abundant, and able to move freely across their landscape.