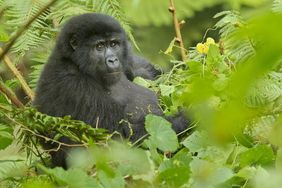 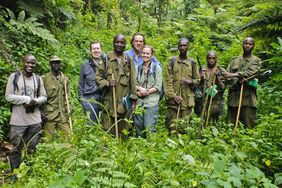 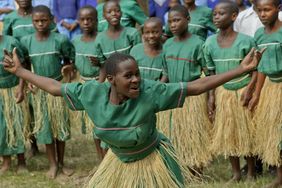 Uganda, June 2011: After our fascinat­ing hike through the Ruwenzoris and a short safari in the Queen Elizabeth National Park we were looking forward to seeing the mountain gorillas and paying a visit to the various aid projects in the Bwindi Impenetrable National Park – Mondberge meets Gorilla beringei beringei.

The road became worse all the time: dusty tracks and potholes were putting our jeep’s driver to the test. The forest became denser, the huts fewer and further between, the greenery more impenetrable. Shaken to the core, we finally arrived in Ruhija to meet Martha Robbins, the primatologist who specializes in mountain gorillas and, together with her staff, spends several months a year at the remote place to study this threatened species.

Martha Robbins brought her colleagues Emily Turinawe and Peter Kabano and two students to the barbecue at our lodge. Over dinner, she told us about the mountain gorillas, her work in the forest and its challenges. An important part of her work is the sensitization of the local people to coexist with the animals in a peaceful way. Another activity is a survey that was carried out after our visit to give an accurate idea of the gorillas’ population size.

Emily Turinawe’s task is to educate the children in the local schools about the need to care for nature. Until a few years ago, gorillas were killed whenever they strayed into the villages – people were scared of them. As the local inhabitants improve their understanding of the animals and the ecosystem of Bwindi National Park, they begin to accept them as their neighbours. The gorillas’ presence attracts tourists, and therefore money, and creates jobs. The Mondberge team supported Emily‘s work with exercise books and pens, chalk and other school materials.

Peter Kabano goes into the forest almost every day in order to habituate two gorilla groups. In a process lasting approximately 2 years, the naturally shy animals are faced with people and eventually they stop running away. At this point, tourists can be taken to view the gorillas.

In the meantime, Martha prepared for the census – among her other duties. As the census is connected with a genetic analysis of the faeces, we carried 1,000 sample vials through customs – not without a number of discussions! As soon as they are filled they will be sent to Germany for analysis.

The next morning, we were taken to the mountain gorillas deep in the forest. We run into them in the impenetrable undergrowth. Dominant silverbacks, rebellious blackbacks, devoted females and playful youngsters kept us spellbound for an hour.

In the afternoon, by way of saying thank you for the presents, the school children performed a play for us. They sang and danced – exuberant in spite of the poverty that casts a shadow over their lives. When T-shirts were distributed, they formed a long queue and waited patiently.

It was hard to say good-bye to Ruhija, the wonderful people and the legendary animals. The fog that covered the valley like a blanket, the green hills and the melodious sounds from the forest increase our desire to stay.