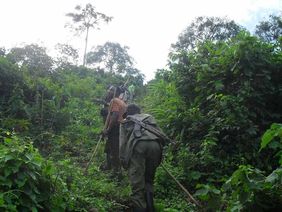 Recent studies show that the populations of African great apes are rapidly decreasing. To prevent this, conservationists always try to find out which strategies protect biodiversity most effectively. In a new study with 41 authors working in many different countries, the protection of great apes in Africa was assessed. They compared the conservation efforts in 109 resource management areas over the last 20 years and analyzed whether primary (law enforcement), secondary (tourism, research) or other conservation measures (NGOs) were most effective. They found that law enforcement by rangers is most important among these strategies. Furthermore, long-term NGO support had a significant positive influence on ape persistence. The other conservation measures were successful too; if there are no conservation efforts at all, there is an increased risk of the extinction of great apes. Conversely, national development, often cited as a driver of conservation success, and high human population density had a negative impact on the likelihood of ape survival.

The study confirmed unequivocally that prolonged conservation efforts lead to a measurable decrease of the probability of apes going extinct, and the longer they last, the lower the probability. In addition to the application of an evidence-based approach, the authors recommend a continuous monitoring program of population trends and threats to ensure the long-term persistence of ape populations.