The Liberation of the Kahuzi-Biega National Park Corridor 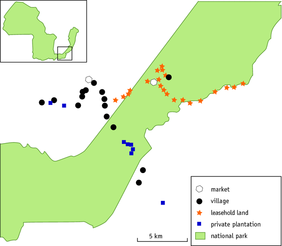 Encroachment of the corridor (© Angela Meder, adapted from a map by WWF/ICCN/BEGO)

The liberation of the Kahuzi-Biega National Park (KBNP) corridor requires decisiveness and cooperation from the Congolese State, and also from the international community. The KBNP is not only a national treasure, but a treasure of humanity: a World Heritage.

This park is unique in sub-Saharan Africa in that it has a corridor that connects the park's high-altitude forest with the forest at lower altitudes. This is one of several characteristics which have resulted in the park being included on the list of World Heritage Sites.
In addition to serving as a link between the two KBNP forest blocks, the corridor also enables animal migration between the low and high altitude areas. Migration is particularly important for key species of the area, whose presence was an important factor in the decision to gazette the protected area: without the capacity to migrate, these species would be threatened by inbreeding.
Unfortunately, the KBNP corridor has been encroached upon several times since 1990. Farms and mining concessions have been established in the corridor with the approval of certain state authorities which should (but do not) cooperate with the Institut Congolais pour la Conservation de la Nature (ICCN).
When war returned to the region in 1996, armed bands took up their abode in the corridor, preventing park staff from doing their work. With the support of some greedy citizens, they devastated the habitat and polluted the rivers. It is now estimated that 60% of the corridor has been degraded since 1996. At this rate, we fear that key species, some of which are already on the IUCN Red List of Endangered Species, will become extinct - such as the eastern lowland (Grauer's) gorilla.
In search of allies, and in order to safeguard their farms, the illegal occupants of the corridor are inciting the nearby population to oppose the park. The park has already started to counter this by engaging with the population as part of the park's community conservation approach. Relations between the park and the neighbouring population are, however, no longer stable. As the corridor is occupied by armed bands, the park staff can no longer patrol this part of the park.

In September 2000, when the park attempted to recover the occupied territory and demarcate the park boundaries, the team was attacked at night and 10 team members were killed.
We have summarized the factors threatening this World Heritage site as follows:

At the local level, we have tried to find solutions to the invasion of the corridor by farmers, armed bands, miners and others:

We consider that the following concrete actions are necessary to ensure the continued existence of the corridor:
At the national level:

At the international level - considering that the KBNP is already a UNESCO World Heritage Site, and that UNESCO is a branch of the UN, then:

Conscious of and spurred into action by the cries of alarm from park staff, the central Government (i.e. the Ministry of Environment) last March accelerated the deployment of a team composed of representatives of the Ministry of Land Titles, the Ministry of Tourism and the Supreme Military Authority in order to gain first-hand information on the corridor problem. The authorities have promised to make necessary decisions and the stakeholders in the KBNP are impatiently awaiting these decisions. It needs to be said, however, that making promises is one thing but realizing them is something else. The KBNP staff continues to wait for the central Government - and also for UNESCO - to make the required decisions.
Our recommendation is to make haste - otherwise there will be no corridor left to save.