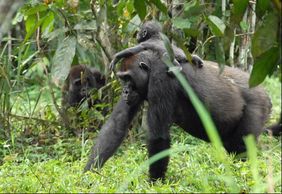 On the 4th December 2007, staff of the Dzanga-Sangha's Primate Habituation Programme (PHP) witnessed the birth of a new gorilla infant into the Makumba group. The group has been followed since 2000 from the Bai Hokou base camp, Dzanga-Ndoki National Park, Central African Republic: an area internationally renowned for its exceptional levels of biodiversity. The Makumba group now numbers 14 individuals including the silverback, 3 females, 3 subadults, 4 juveniles and 3 infants. The new-born was named Mowane (meaning "gift of God" in a local Bantu language) by the Central African Republic's minister in charge of Développement du Tourisme et de l'Artisanat (Development of Tourism and Arts and Crafts), Madame Yvonne Mboïssona, who luckily arrived shortly after the birth on her first visit to the gorillas.

The silverback, Makumba, was first observed attempting to mate with Mowane's mother Malui in February 2007, and was mating successfully from the end of March right up until a week before the birth. Malui gave birth to Mowane in a tree nest (Drypetes sp.) approximately 15 m from the ground; Makumba was feeding in a tree nearby. Two juveniles (one an unrelated subadult male, son of the dominant female, the other possibly Malui's juvenile daughter) showed great interest in the birth and climbed the tree to watch. The trackers then observed Malui biting the umbilical cord free, after which she climbed down and made three more nests on the ground. At this point her other offspring (one aged about 7 years, the other 3 years 10 months, estimated to within a month) came and watched Malui groom the infant.
The new birth follows the shortest interbirth interval (IBI) recorded for western gorillas, which was previously estimated at 4-6 years (N = 6, Robbins et al. 2004). Previous IBI comparisons with mountain gorillas (average surviving IBI 3.9 years, N = 88, Robbins et al. 2006) predicted longer IBIs in western gorillas because of the expected increased competition amongst western gorilla females (Doran & McNeilage 2001). More accurate data are needed, but this appears to be a trend for this group's females in particular and may reflect the health and ecological status of the group in general. Like the other mother-offspring pairs, Mowane has inherited the unique nose pattern of her mother, V-shaped nostrils with distinct line-markings above.
Today, the mother and infant are doing well and staying within the proximity of Makumba's protection. Initially carried on Malui's underside, by the second day Mowane was intermittently being carried on her mother's back, and more recently on her arm. Makumba is taking his role of protective father seriously: he rapidly led the group away from the imminent threat of a solitary male during an interaction a week later (which unfortunately also led to the transfer of a subadult male, aged approximately 8, and the return of the group size to 13).
Despite being home to one of the largest remaining populations of gorillas in Central Africa, poaching, unsustainable logging, and the potential spread of diseases such as Ebola present major threats to the survival of apes in the Sangha region. The Makumba group is the second gorilla group habituated by the WWF-funded PHP which was set up in 1997 to protect and better understand this endangered and little-known species. Its aim is to habituate western gorillas for tourism and research and thereby increase the economic value of the park, raise revenue for local communities though revenue sharing, and raise support for gorilla conservation.
The program forms part of the larger Dzanga-Sangha Protected Areas Ecotourism Program, managed in partnership by the Central African Republic's government, WWF and GTZ/GFA Consulting Group. Habituating western gorillas (a process whereby individuals become accustomed to human presence) can take over 5 years and requires a substantial investment in effort and resources.
The PHP is now considered a key success of WWF's work in the region and staff are currently following 4 gorilla groups in varying stages of habituation (as well as an extraordinary group of approximately 230 Cercocebus agilis). Learning a wealth of lessons along the way, the program contributes to gorilla conservation strategies through the application of knowledge gained from long-term research. It provides visitors with the unique opportunity to see wild western lowland gorillas in their natural forest environment, raising international and national awareness and interest on the plight of the western lowland gorilla. Lastly, the program generates income for the protection of the park, the local community, and substantial donor support for gorilla conservation efforts, not only for the Dzanga-Ndoki National Park, but throughout the Congo Basin.