Conflict with the Nkuringo Group 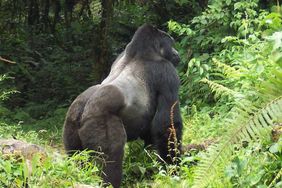 The Nkuringo group ranges at the edge of the southeastern part of Bwindi. Its habituation started in 1996 and it was not completed until 1998; the first tourists visited the group in April 2004. A study that Michele Goldsmith started in 2001 showed that the group spent most of its time outside the park boundary. The group devastated many banana plantations and also fed on eucalyptus and sweet potato. It was up to the rangers (or the HUGO - Human Gorilla Conflict Force - team) to chase them out of the fields. Therefore, land was purchased and a buffer zone was created in 2003/2004, in the area which was used frequently by the Nkuringo group - a 12 km by 350 m stretch (4.2 km²). It has not solved the problem completely, however, as the gorillas sometimes range more than 1 km outside the park boundary.
Even now, in 2008, the Nkuringo group frequently leaves the park and the buffer zone to feed on fields; as they are habituated to humans, they are not afraid of the farmers. At the beginning of April, over 30 gorillas had camped in people's gardens for more than a week and were eating crops, as reported by Gerald Tenywa in the New Vision. People were compensated when the buffer zone was created and moved farther away from the park, but the gorillas followed them, and now, when they destroy crops, as they frequently do, the farmers are not compensated. But there are more problems: In some cases schoolchildren do not go to school when gorillas pitch camp between the residences and the schools. Sometimes children have to stay home to watch over their farms.
To prevent the Nkuringo residents from killing crop-raiding gorillas, it was clear that they should benefit from gorilla tourism like the community of Buhoma. So they founded the Nkuringo Conservation Development Foundation (NCDF) in 2003 with support from the UWA (Uganda Wildlife Authority), IGCP and AWF (African Wildlife Foundation), to fund development and conservation initiatives at Nkuringo. It currently has 3,000 members (out of about 30,000 residents).
The NCDF secured the funds to build a luxury facility, CloudsMountain Gorilla Lodge, which will be managed under a partnership with the Uganda Safari Company. The lodge has been constructed with funds from the United States Agency for International Development (USAID). In April 2008, the UWA signed a contract with the NCDF and the AWF that said that 6 out of 8 permits for visits to the Nkuringo group each day can be sold by the NCDF's partner, the Uganda Safari Company.
As reported in the New Vision by Darious Magara, Nkuringo, the leading silverback of the Nkuringo group, died on 27 April 2008. He was very old. According to Michele Goldsmith, "he had a fight years ago that left his mouth slighly paralyzed and it made it difficult to eat - plus his teeth were getting worn to their core."
The Nkuringo group has 18 members now. One of them is the younger silverback Safari, who already took over the group leadership about 2 years ago.