Report of an Arrest

Categories: Journal no. 64, Democratic Republic of the Congo, Maiko 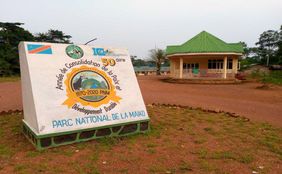 In view of the threats observed and documented in different areas, particularly in the Bafwasende area, central sector of the Maiko National Park MNP), strategies must be developed at different levels to mitigate their scope, extent and intensity. Insecurity in the park remains a priority for stabilisation of the region, with insecurity caused by exploitation of minerals and poaching, particularly of middle-sized monkeys and chimpanzees. Patrols confirm the presence of poachers under the protection of armed groups and certain elements of the security services.

It is in this context that a mission was planned to identify and analyse the root causes of illegal activities. In collaboration with the politico-administrative authorities, the state services, and the representatives of the local communities of the Bafwasende territory, a meeting was organised in Bafwasende and Opienge. The objectives of this meeting were the following: (1) sensitise the communities bordering the Maiko National Park on the protection of great apes and their habitat, particularly in the Bafwasende Territory around the park; (2) obtain the involvement of politico-administrative and customs authorities, local communities and that of state services in order to recover/confiscate 12-gauge hunting weapons, baby chimpanzees, and other protected animals that are illegally held; and (3) set up a commission for the voluntary handing in of 12-gauge hunting weapons. Here is my report of what happened there:

"On Monday, December 6, 2021 at 1 p.m., I received a phone call from the intelligence service (ANR, National Intelligence Agency) Tshopo based in Kisangani who asked me whether I invited a delegation of Mai Mai Luc to Kisangani, and I said no. He told me that he had just received a delegation from Luc in Kisangani at my invitation. I reaffirmed that no, but that in the meeting of November 10, 2021 on the sensitisation of the communities of the central sector of the MNP, it was recommended to constitute a commission which could meet Luc in order to study the modalities of its exit from the park and thus let ICCN/MNP do its work in the central sector. There was no question of a meeting in Kisangani. The Chief of Intelligence asked me to join him in Kisangani immediately on the orders of the Provincial Security Committee. I told him that I was in Oso, 340 km from Kisangani, and given the multiple occupations, I could only arrive on Friday, December 10 and I had to inform my hierarchy. He replied that it was a matter of extreme urgency to know whether it was the ICCN which invited the Mai Mai to Kisangani. Again I said no - if I had invited them, why would I still be in Oso and not in Kisangani?

In the meantime, I directly informed the wildlife Authorities in Kinshasa by email about this invitation. At 4 p.m., another call asked me if I was already on the way and I told him that I would come on Tuesday. I was waiting for the reaction to my emails sent to the hierarchy but without success. I thus tried to call first the Technical Director without success and the Operations Corps in the Parks and Related Natural Reserves without success; fortunately, I reached the Line Manager. The latter instructed me to ask the ANR for the official invitation and wait for the authorisation of my authority. Thirty minutes later, the phone call of my invitation was on the orders of all the members of the provincial security committee who found a real need to introduce me for such an important security issue. I also directly called the Provincial Director of ICCN to inform him of the situation. At 6 p.m., talking with a member of the Lubutu security committee, the latter told me that it would be difficult for the Governor to issue an invitation and if he did, it would be late, with the consequences that I could be accused first of boycotting the appeal and second of being in collusion with the armed groups. If I had not invited them, it was better to show up and confront them instead of them charging me with accusations which will be difficult to defend. I also spoke about it to the ICCN Provincial Director who asked me in this case to come to Kisangani and discuss it first before presenting myself to the ANR. It was at 7 p.m. now. I took the option of travelling to Kisangani by night to be in there on Tuesday at 9:30 a.m.

A strong team from the security committee arrived with 6 people including 4 delegates of Mai Mai Luc. I replied to all their questions and everything was recorded. Nevertheless, the Director of Military Intelligence put me in jail for investigations on December 7 but released me later that night. On December 8, I was asked to stay in the hotel until further notice. On December 22, the Intelligence Service called me back to tell me that the Regional Commander had given his agreement for me to return to work and that we had to meet him to discuss it. Instead of meeting the Regional Commander, I was taken to the military prosecutor's cell and transferred, on December 23, 2021 at 4 p.m., to the central prison of Kisangani without being notified of my guilt. In all this cacophony around my interrogation and that of the Mai Mai delegation, we can learn a lesson: the Mai Mai want to leave the park freely and lay down their arms. For them, the purpose of the delegation was to find guidelines for their surrender."

Since I announced my state of arrest, several people started activities and contributed administratively, morally and financially to my release. I would like to extend my sincere thanks to them.