Protection of the Cross River Gorillas in Takamanda 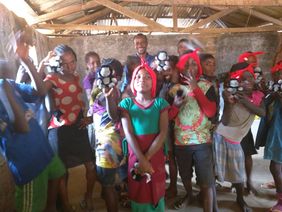 These children passed the examination for the Ape Expert certificate and received animal toys. (© AWP)

The Takamanda National Park is not only a home to many of the endangered Cross River gorillas (Gorilla gorilla diehli), but also to people. Currently, civil war is looming in the region. While large international organisations such as WWF and WCS have pulled out of the area, the AWP (Association for Wildlife Protection - www.awpwildlife.org), a small organisation located in Freiburg in southern Germany, has remained, refusing to abandon the gorillas and the human residents.

Hardly any information about the status of the great apes comes out of the region. For over two years, the species-rich national park has been a military combat zone: Rebels use the forest as a refuge and the government tries to recapture the area. The local people live in the middle. In 2017, they were told to leave their homes within 48 hours. Many fled across the border to Nigeria, some of them reaching a reception centre set up by the UNHCR. Although the civil war is still ongoing, some have now returned to their villages to rebuild their lives. AWP assists them in this endeavor, hoping in turn for their support in protecting the gorillas.

Gorilla conservation only works in cooperation with the local people. Most of them are farmers and live from cocoa cultivation, but they cannot increase the area they are cultivating and there are no roads to transport the harvest. Even before the unrest started, their income was extremely low.

In 2018, AWP started the construction of a solar dryer. It allows them to keep the harvest dry during the rainy season, preventing loss due to mould. AWP's condition for setting up the dryer was that the facility should only be used by farmers who are actively involved in gorilla protection and that women should have equal access to the dryer. The construction work was completed in mid-2019, although all building materials had to be transported by boat and motorcycle through an area affected by civil war.

During its first test run, the dryer proved to have a capacity of 1.25 tons per week - sufficient for the harvest of the entire village. In addition, AWP installed fermentation boxes to improve the quality of the harvest. We hope that the new facility will ensure that the farmers' income will increase by 8-10 %, a first step in freeing the population from poverty. A second step would be to enable the farmers to sell their beans at a fair price. To this end, we have offered their cocoa beans to leading European chocolate producers - and the results are promising.

The conflict in the English-speaking part of Cameroon started with a new education policy of the French-speaking central government. This was followed by several years of school kidnappings and threats to prevent the children from attending school. It is always the children who suffer. AWP is currently the only organisation to restore a little bit of normality for the approximately 8,000 children in Takamanda. In collaboration with Wilhelma Zoological and Botanical Gardens Stuttgart, we help children aged 7 to 17 to catch up on regular lessons with a mobile classroom. We further implement learning games and a singing contest. The educational goal is to impart motor, linguistic and social skills to the students. In addition, the children also learn to live peacefully alongside their animal neighbours, specifically the Cross River gorillas and the Nigeria-Cameroon chimpanzees.

The educational project is delivered in class during the school term: in effect, a project week. In Takamanda, the classes are mixed and consist of up to 60 students, sometimes with great differences in age - a challenge for our educators who have been specially trained for the programme. The modern methods that are employed, such as station learning, group seating or individual child support, are also unusual. In order to obtain the "Ape Expert" certificate, students must pass a written examination. Especially dedicated children receive soft animal toys as prizes.

Working for gorilla conservation in western Cameroon is exhausting and risky for AWP staff: simply getting to the Takamanda National Park may endanger their lives. For example, the road to Mamfé was considered impassable until the project manager, Mrs Ngwasina, travelled it unharmed. There are also so-called "ghost towns", where, on some days, trade stops and neither buses, nor hotels, nor food are available. Power outages and the loss of telephone and internet connections also hamper communication. Plus, without warning, you might find yourself in the middle of a gun fight on the streets. Experts advised us against the use of bulletproof vests - if these fell into the hands of the rebels, they could be regarded by the government as "military supplies" because they give the enemy a military advantage.
Again and again our teams are detained for hours and screened by the military or the rebels in so-called "check points". Even when they have finally reached their destination in the national park, our teams are still exposed to suspicious looks, and their communications are intercepted to make sure that they are not spies.
In spite of this difficult situation, the project has been running for two years, and we can see how the situation in Takamanda is slowly getting better. Smiles are returning to people's faces, people who are willing to protect even gorillas from danger.

We have the agreement of the Cameroonian Ministry of the Environment to extend our project to other villages, and the word of the rebels who respect our commitment to the region. You - as readers of this magazine and supporters of Berggorilla & Regenwald Direkthilfe - are currently among the few who make our involvement possible. On behalf of the indigenous people of Kekpani, I would like to thank you for this.