Climate Change in the Congo Basin 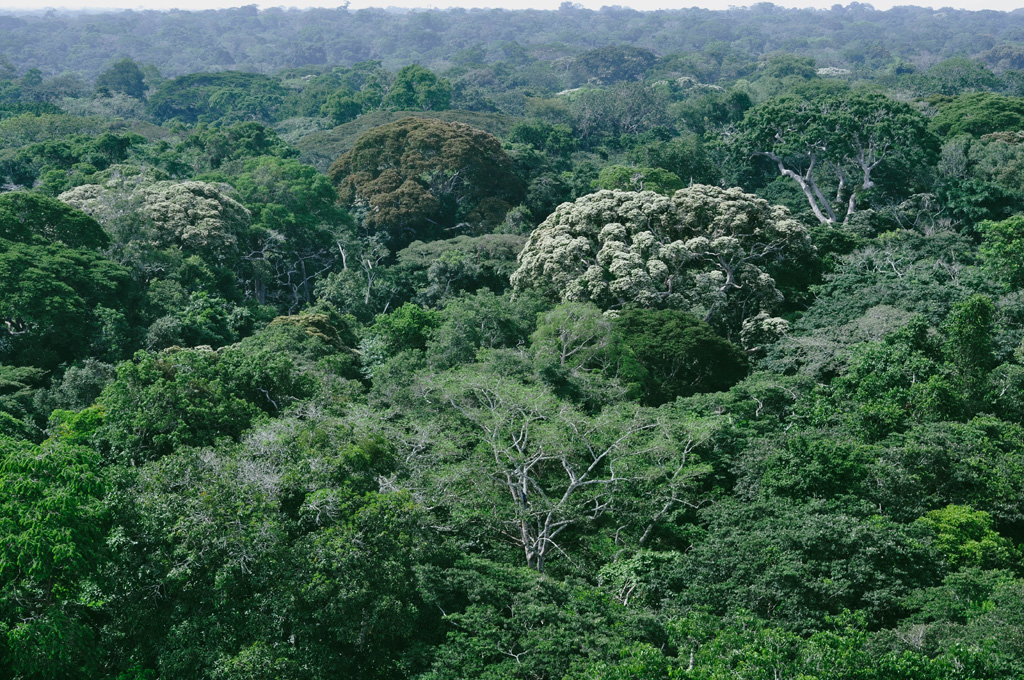 The Congo Basin covers an area of more than 4 million km² and is home to a number of different ecosystems. Grassy savannas in the North and South enclose a huge swath of tropical forest in the heart of the continent. These forests stretch a vast distance, from the East African Rift Valley in eastern Democratic Republic of the Congo to the Atlantic coasts of Gabon and Cameroon. But not all forests within this region are the same: the forest belt is composed of lowland, montane, and swamp forests, but also dry woodlands - dominated by the so-called Miombo tree species.

The mighty Congo River meanders more than 4,700 km through this area in a large arc before flowing into the Atlantic Ocean at an average discharge of 41,000 m³ per second. This river is so massive that it has formed a natural boundary on the continent, allowing chimpanzees and bonobos to co-evolve in separate parts of the basin. The latter live south of the river and, like the Congo peacock and okapi, are found exclusively in the Democratic Republic of the Congo.

Congolese tropical forests are not only important for safeguarding unique fauna. The forests also absorb enormous amounts of carbon dioxide (CO2) from the atmosphere through photosynthesis, thereby playing a major role in climate processes. At the moment tropical forests are still a net sink for CO2, meaning that they absorb more CO2 than they release. Intact African rainforests take up as much as 0.3 petagrams (1 Pg = 1015 g) of C per year (Hubau et al. 2020). This is equivalent to twice Germany's total annual emissions from fossil fuel burning and industry and double the CO2 uptake in intact forests in the Amazon basin! But the CO2 uptake of these forests is not the only important process for the global climate. Methane (CH4) and nitrous oxide (N2O) are two other important atmospheric greenhouse gases that are also exchanged by tropical forest soils (Barthel et al. 2022). For example, flooded swamp forests release enormous amounts of methane while non-flooded forest areas absorb methane. Thus, tropical forests are extremely important to help buffer or mitigate the ongoing climate change caused by the release of anthropogenic greenhouse gases.

In turn, climate change also affects the Congo Basin itself, as can be seen from long-term air temperature data. Since 1960, the Meteorological Institute of the research station, Congolese Institute for Agronomic Research (INERA) in Yangambi, D. R. Congo has been recording the daily air temperature by hand - on tables provided for this purpose. These measurements have been written out by hand every single day since 1960. Through some rather painstaking work, an international team of scientists have now digitized and evaluated these temperature data. These six decades of hand-written temperature data show that the Congo Basin has warmed steadily over the past decades (Kasongo et al. in review). In addition to rising temperatures in the Congo Basin, the duration of the dry season has also increased over the past decades (Jiang et al. 2019), together with an increase in the yellowing of Congolese forests (Zhou et al. 2014). Both the rising temperatures and longer dry seasons can increase tree mortality, which would likely reduce the CO2 sink capacity of forests and alter forest structure and composition. However, how exactly these rapid changes in climate will affect other ecosystem functions, such as habitat for the resident bonobos, remains to be seen. Only one thing is sure: increasing our conservation efforts is essential to give the forest the best chance to survive and remain healthy. Climate change already compromises these systems, while we are in such dire need of them to absorb our emitted carbon.