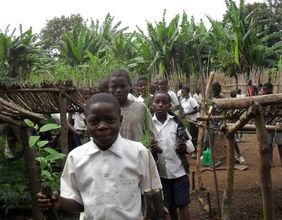 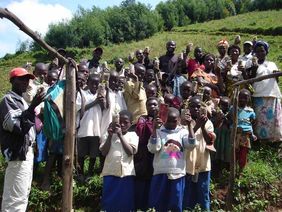 The tree seedlings are distributed to the population. (© Jean de Dieu Paluku Vhosi) 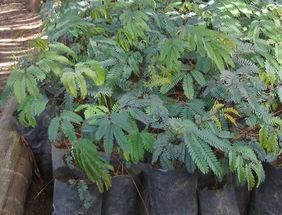 The population of the eastern Democratic Republic of the Congo depends on charcoal for cooking. To obtain it, they cut large areas of forest, even in national parks and reserves like the Mt. Thsiaberimu, a part of the Virunga National Park, and the Sarambwe Reserve. Both forests are the home gorillas.

For some time areas at the edge of these protected areas have been reforested with the support of the Berggorilla & Regenwald Direkthilfe. Different tree species are planted that the population can use in several ways, so they are not forced any more to cut trees in the protected areas. This reforestation project has been very successful.

For a pilot project we have been supporting 3 schools in the surroundings of Mt. Tshiaberimu since 2010. They grow tree seedlings and plant them on areas that were provided by the owners for this purpose. The plan was to grow 24,000 seedlings per year and the reforestation of 12 ha. But after the first year, 52,500 seedlings had been planted and 35 ha reforested. The project was an incredible success!

This success resulted in the interest of other schools to also participate in the program. We now decided to support 6 more schools for 3 years – 3 close to Mt. Tshiaberimu and 3 close to the Sarambwe Reserve. We already transferred US$ 7,856 in January for a start in April 2012, but to secure the support during the whole period, we need more donations.

Help us to fund this program that supports the gorillas as well as the local population! We hope that with the many new trees the prospect for a better future will also grow in the east of the DRC.

Update: the funds for 2012 were transferred to the project, but it will be continued in 2013 - so we need further support!