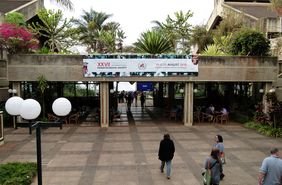 The central area of the UN compound in Nairobi (© Angela Meder)

From 19-25 August 2018, the biannual conference of the International Primatological Society, organised by Johannes Refisch (GRASP), took place in the UN compound in Nairobi. The meeting was very successful: it included many interesting talks and discussions, and was an opportunity to exchange news with colleagues and gorilla conservationists. This year, an especially large number of gorilla scientists and conservationists from Africa were able to participate - which gave me the opportunity to meet people in person with some that I had previously 'met' only by email.

I arrived early in Nairobi to discuss BRD projects and current issues with our assistant Claude Sikubwabo Kiyengo, who also participated in the conference. He reported that the situation in Sarambwe has improved: thanks to regular patrolling, the forest is slowly reclaiming hitherto cultivated areas and the gorillas sometimes visit and utilize these areas. In the Mt. Tshiaberimu area there had been problems with Mai-Mai rebels this year, but they had now retreated. The relationship with the local population is good: the people who live in the vicinity of the park frequently inform the rangers when they notice illegal activities. In both project areas, rangers, trackers and the communities adjacent to the protected areas have asked for additional support.

During the conference, we were also able to discuss the Itombwe Reserve. I learnt that the Canadian company Banro has commenced gold mining in the core zone of the reserve. We discussed what can be done against this - and what can be done for the reserve, which urgently requires additional long-term support. We will certainly continue to do anything we can for this important area.

We Need Help for the Gorilla Projects in Eastern Congo!

Claude Sikubwabo Kiyengo has come up with many suggestions for active support of the projects in the eastern Democratic Republic of the Congo. We would like to implement as many of these suggestions as possible, but to do this we need additional funds. For example, the following are urgently needed:

Please help us to support long-term conservation of the protected areas and gorillas of the eastern Congo. As more and more organisations retreat from this troubled region, reliable support from us becomes ever more important.