Report on the General Meeting 2016 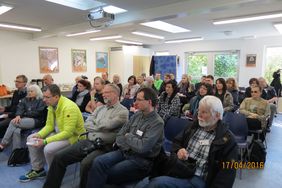 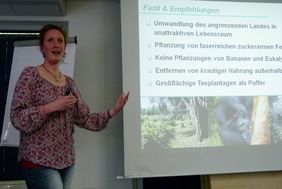 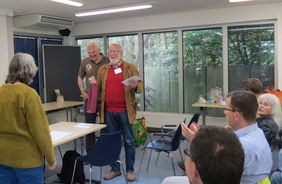 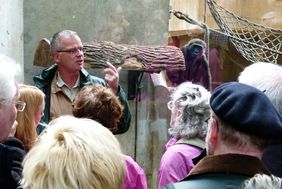 On 16 and 17 April, our biannual meeting was held in Hannover Zoo. With about 50 members and guests it was very well attended. The event started at 2 pm on Saturday with Angela Meder reporting on the current status of individual gorilla areas supported by the organisation.

This year's lecture, entitled "Crop Raiding Gorillas of Bwindi", was given by Nicole Seiler, who has carried out field research as part of her PhD thesis. The objective of her study was to determine the factors that influence gorillas to leave the national park and enter neighbouring agricultural areas – and how this might be prevented in the future. The finding was that the gorillas do not leave the park because of a lack of food but for convenience. They are enticed out of the park by the attractive food that is on offer outside, such as the pith of banana stems and the bark of eucalyptus trees. This situation might be remedied if the people living next to the national park focused on cultivating plants that gorillas do not like. This would have to be monitored.

Afterwards Angela Meder gave an overview of the projects for western gorillas funded by the Association in 2014 and 2015 and an outline of the current year’s financial plan.

The meeting concluded with a very moving slide show in memory of Hermann Bürgel who recently passed away. His friend and fellow campaigner Manfred Hartwig acknowledged Bürgel's lifelong involvement with many very personal images and stories. Hermann Bürgel founded "Berggorilla Patenschaft", which later developed into Berggorilla & Regenwald Direkthilfe. (It was named "Direkthilfe" - direct aid - because long-standing personal contacts with people active in the gorilla areas make it possible to channel aid directly where it is needed, and because it is possible to monitor how funds are used. As everybody in the organisation volunteers their time, there are very low administrative costs.)

The day came to an end with a dinner and many interesting conversations in the comfortable surroundings of the zoo restaurant.

At 10 am on Sunday the formal part of the event commenced with the acceptance of the accounts and new elections. As long-term Board member Rolf Brunner did not want to continue because of his age, Burkhard Bröcker was elected as a new Board member.

Afterwards we were given a guided tour of the zoo's ape enclosure. Great ape keeper Klaus Meyer started by explaining and demonstrating the safety features that allow for caretakers to enter the inside areas for cleaning or to provide the animals with food and water. Standing in front of the enclosures of the individual species (gorillas, orang-utans and chimpanzees) he then provided insights into the species' differing psyche and social behaviour, giving examples from his professional life and sharing some of his wealth of experience. His commitment to caring for the animals and his attachment to them were unmistakable. After this interesting guided tour most participants started on their journey home.

Overall it was another entirely successful event for which we would like to express our heartfelt thanks to the organisers and participants.