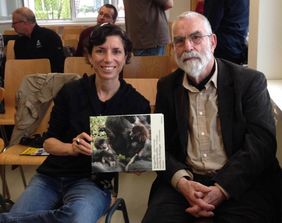 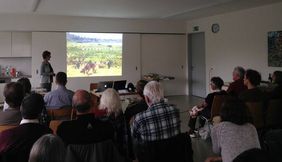 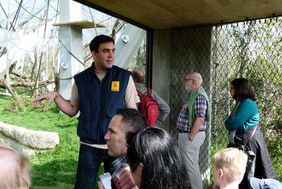 April 2014: Berggorilla & Regenwald Direkthilfe invited its members to Basel for the general members' meeting, which took place in the "Zolli" operations building ("Zolli" is the nickname given to the Basel Zoo by the people of Basel).

The Board of the organisation and many of its members travelled from Germany and Switzerland for the meeting, which took place over two lovely spring days. Olivier Pagan, the Director of Basel Zoo, participated, accompanied by his wife. On the first day, Angela Meder reported on the current status of the eastern and western gorillas and on B&RD's activities on the ground. Marlene Zähner, a Swiss veterinarian, showed a film about the congohounds, which are used against poachers in the Virunga National Park. Adrian Baumeyer, curator in the zoo, reported on how the keeping and breeding of gorillas in Basel Zoo has developed over time, giving the example of Goma, the 55-year old female gorilla who was the first gorilla born in Europe. Andreas Klotz gave a presentation on the donation of an x-ray machine to a hospital near Bwindi Impenetrable National Park. The meeting was honoured by a surprise visit by gorilla researcher Jörg Hess.

On the second day, the treasurer's report was received and approved, the actions of the Board were formally approved, and the Board was re-elected. A highlight of the meeting was a guided tour through the gorilla enclosure with Adrian Baumeyer. He reminisced, with many anecdotes, on the difficult conversion of the ape house that was carried out in 2011/12. Gorillas, chimpanzees and orang-utans now have the run of enlarged inside rooms and outside enclosures secured with overhead netting. The tour participants were introduced to individual members of the gorilla group. They also learnt that some animals are suffering from dangerous parasites and how this is treated.