The Economic Value of Virunga Park 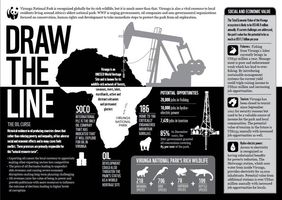 In response to the granting of oil concessions in Virunga National Park (Virunga) in the Democratic Republic of the Congo (DRC), WWF launched a campaign to raise awareness of Virunga's economic value and the implications of oil development for local communities and the environment. As part of the campaign, WWF commissioned Dalberg Global Development Advisors to study Virunga's current and potential social and economic value and to indicate the implications of oil exploration and exploitation.

Located in eastern DRC, Virunga is Africa's oldest national park. One of DRC's ﬁve United Nations Educational, Scientiﬁc and Cultural Organization (UNESCO) World Heritage Sites, the park is known for its wildlife-rich network of forests, savannas, rivers, lakes, marshlands, active and dormant volcanoes and permanent glaciers. It is also famous for being home to about 200 critically endangered mountain gorillas.

In December 2007, the DRC government granted oil concessions covering 85% of the park. To date, SOCO International PLC (SOCO) is the only oil company that has indicated that it will explore for oil within park boundaries. Despite DRC's law prohibiting environmentally harmful activities in protected areas, SOCO's exploration licence exploits an exemption in that law that allows for "scientiﬁc activities" in protected areas. SOCO's oil concession covers the Lake Edward, source of fish and income for 27,000 fishermen and home to endangered hippos.

Plans to develop oil expose the social and economic value of the park to risks, the likelihood and impact of which is demonstrated by cases such as the Bas Congo and Niger Delta. These risks include the following:

Oil development could also threaten the park's status as a World Heritage Site, which if lost, could in turn have negative effects on the value of the park. In the current situation, Virunga's value is approximately US$ 48.9 million per year. In a stable situation characterized by the absence of conﬂict, secure access to the park, and sufﬁcient resources to protect the ecosystem, the park could increase in value to more than US$ 1.1 billion per year. The value of the park may be far higher if additional factors were to be taken into consideration.

DRC is not only home to Virunga, Africa's most biodiverse park, but also contains four other World Heritage Sites recognized for their outstanding natural value, as well as a variety of other national parks. These protected areas represent a long-term source of income if managed sustainably. Virunga alone has the potential to provide for the livelihoods of 45,000 people through the provision of job opportunities.

It is a unique place on Earth that we must all fight to protect. WWF thus launched a global campaign and calls for support from the international community to help 'Draw The Line' and keep oil exploration out of Africa's oldest national park. Every name helps to show governments and businesses how strongly people feel about protecting precious places like Virunga.

Please, help us fight for the protection of the Virunga National Park!