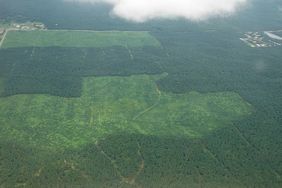 The oil palm (Elaeis guineensis) has its origin in West Africa. Palm oil is a common cooking ingredient in equatorial Africa, Southeast Asia and parts of Brazil (Hoyle & Levang 2012). In the addition to palm oil extracted from the pericarp, kernel oil from the endosperm is used in the cosmetics industry. In some Western countries the greater use of oil palm in food products is driven by the move away from unhealthy trans-fats. Waste from the palm kernel after the extraction of the oil is also used as animal feed and as biofuel (Hoyle & Levang 2012). There are also proposals to replace diesel with biofuels in electricity generating stations powering mobile phone base stations in rural Africa (van Grinsven 2006). A palm oil plantation produces more oil per hectare than rapeseed, soybean, sunflower and maize crops, the major biofuel plants.

Malaysia and Indonesia are the world’s largest producers, together accounting for 81,7% of the world's palm oil production (USDA 2012). In Africa, the main producers are Nigeria, D. R. Congo, Ghana, Cameroon and Ivory Coast (Carrere 2010; USDA 2012).

Over the past years global demand for palm oil has grown massively due to increased consumption in China, India and emerging Asian economies where palm oil is used as a cooking oil. Furthermore, as part of the EU's attempt to reduce the emission of green house gases, the EU 20/20/2020 target foresees a 20% penetration of renewable energy by 2020. This decision has fueled the demand for palm oil and increased prices. The decision was well intended, but the target does not list any requirement for the sustainable production of renewable energy, so without further regulation the expansion of biofuel production might undermine the climate change goal and fuel forest destruction.

While the expansion of the palm oil sector in Malaysia is limited (there is no more land available), and the same is true for large parts of Indonesia, many Asia-based companies are now expanding to Africa to satisfy the global demand. A big issue in Asia has been the "grabbing of land"; there are examples where forest land was grabbed, the timber sold, and the revenue from the timber sale used to finance the development of the oil palm plantation. Wich et al (2011) estimate that illegal logging was responsible for the removal of 380,000 ha annually in Sumatra during the last two decades, or comparable to a loss in carbon value of approximately US$ 1 billion every year - and many of these forests harboured important orangutan populations.

Malaysia and Indonesia have demonstrated that palm oil production is an economic opportunity for local and national economies, and has the potential to reduce poverty and contribute to socio-economic development. Benefits include employment, revenue/taxes, and infrastructure often associated with better education and health provision. Often industrial-scale plantations are complemented by small-scale plantations. Boyle and Levang’s article (2012) indicates that in Southeast Asia 30-40% of the surface area covered by oil palm is the property of smallholders.

The major challenge is how to reconcile agricultural development with biodiversity. The massive development of the palm oil sector has resulted in the loss of high conservation value forests and their associated biodiversity. Other environmental damage includes the increase in soil erosion, reduced water protection by forests and, of course, greenhouse gas emissions from land-use conversion.

There are also social costs, e.g. when large agribusinesses do not involve smallholders and/or recruit their workforce from somewhere else. The loss of alternative revenue is another issue: tourism, sustainable forestry, non-timber forest products, and payment for environmental services such as REDD+ (Reduced emissions through deforestation and degradation) can significantly contribute to a local and national economy.

An example of the clash between development and conservation is the Tanoe Forest in Ivory Coast, where massive local and international protest prompted the government to cancel the conversion of a high biodiversity forest into an oil palm plantation. The Herakles project in Cameroon is very contentious as well, as it proposes the acquisition of >100,000 ha in southwestern Cameroon, situated inside a globally recognized biodiversity hotspot between Korup National Park, Rumpi Hills Forest Reserve, Bakossi National Park and Banyang-Mbo Wildlife Sanctuary (Hoyle & Levang 2012; Linder 2013).

How to Reconcile Palm Oil Expansion and Conservation

The sustainable development of palm oil can lead to economic development and poverty reduction, but its uncontrolled development might lead to the loss of high conservation areas, might negatively impact on local communities and indigenous people, and can prevent the countries from benefiting from payment for ecosystem service schemes.

The author and colleagues (Wich et al. 2011) undertook a comparative economic analysis in Sumatra, Indonesia, and compared the potential economic benefit from palm oil with the potential revenue from other land-use forms including a conservation and climate change scenario under REDD+. Some of the recommendations are relevant for the situation in Africa as well, among others:

In Indonesia and Malaysia, where most of the forests have been converted into oil palm plantations, Koh and Wilcove (2007) propose to use revenue from oil palm agriculture to buy land for the establishment of private nature reserves.