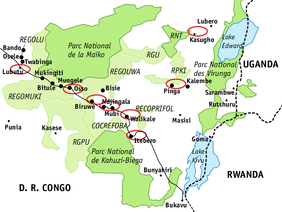 Map of the UGADEC region in northeastern Congo. Large dots: CAP sites. Red circles designate areas where ape confiscations have occurred. The Walikale and Lubutu territories include communities along the route between Lubutu and Itebero. (© Angela Meder, adapted from a JGI map) 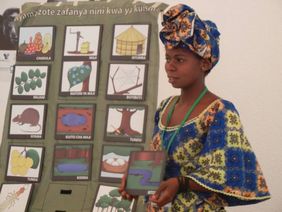 Some of the largest tracts of forest habitat in the eastern Democratic Republic of the Congo are located in the Walikale and Lubutu territories. Although the forests are not formally protected by the government, the communities have designated them as protected areas and are working with the government to establish the land as formally recognized reserves. The forests of Walikale and Lubutu include important corridors between Kahuzi-Biega and Maïko National Parks and currently have healthy populations of Grauer’s gorillas, chimpanzees, leo­pards, and elephants. Although human density inside the forests of Walika­le and Lubutu are still quite low, the perimeters are some of the most densely populated and impoverished areas of DRC.

Unfortunately, poverty, proximity to wildlife habitats, the presence of a major roadway, and the increasing presence of mining extraction companies make the Walikale and Lubutu forests target areas for the illegal bushmeat and pet trades. Sadly, evidence of these illegal practices is growing at an alarming rate, and stories of confiscations are even making national headlines. Prior to 2000 only one eastern gorilla was confiscated by wildlife officials in the eastern DRC. In contrast, during the last 10 years, 17 eastern gorillas and more than 50 chimpanzee orphans were confiscated from northeast DRC alone. It is speculated that as many as 30 more chimpanzees came from this region but ended up in a sanctuary in southeast DRC (Pan African Sanctuary Alliance Database). Of those rescued, a large number were confiscated in the provincial capital of Goma and in villages located along the main road running between the Maïko and Kahuzi-Biega National Parks (see map).

When orphans are confiscated, wildlife authorities arrange for their care at one of the three facilities in northeastern DRC for rescued apes: GRACE (Gorilla Rehabilitation and Conservation Education Center) for Grauer’s gorillas, Senkwekwe for mountain go­rillas, and the Center for the Rehabi­li­tation of Primates in Lwiro for chim­panzees. These sanctuaries are essential components to anti-poaching efforts, but they are quickly exceeding their capacity due to the substantial increases in ape confiscations.

In early 2011, with support from the Arcus Foundation and The World We Want Foundation, the Congolese Wildlife Authorities (ICCN) and the Jane Goodall Institute (JGI) facilitated a Conservation Action Plan (CAP) Workshop to assess the current status of gorillas and chimpanzees in eastern DRC. During the workshop, illegal poaching was identified as the number one threat to apes in northeastern DRC, and the Walikale and Lubutu territories were recognized as critical target areas for conservation efforts. Furthermore, conservationists identified conservation education for local communities and law enforcement agencies as one of 5 priority strategies to protect gorillas and chimpanzees in Walikale, Lubutu and other areas with high rates of ape poaching.

Based on the priorities outlined during the CAP workshop, JGI joined with conservationists from Disney’s Animal Kingdom® to develop and implement a comprehensive conservation edu­cation program in the Walikale and Lubutu territories. To develop the program, a needs assessment survey was first conducted to identify key issues that should be addressed in the program. The survey consisted of 21 questions about people’s knowledge, attitude, and practices with regard to ape conservation. It was administered to 350 people living in the following 10 communities in the Walikale and Lubutu territories: Lubutu, Biruwe, Bisie, Ndjingala, Mubi, Walikale Centre, Itebero, Kasese, Pinga Centre, and Kalembe (see map). The survey results highlighted the severity of the bushmeat problem and the lack of knowledge concerning wildlife regulations and penalties, demonstrating the potential benefits of conservation education.

Here we present some of our key findings from the ape conservation awareness survey.

With this invaluable groundwork, JGI and Disney’s Animal Kingdom® developed a conservation education program for both adults and primary school-aged children. Educators from 10 communities in the Walikale and Lubutu territories were selected to deliver the educational program. It was particularly important to involve local educators to enhance their capacity and to ensure that educators were well-respected members of their com­munity with first-hand knowledge of the conservation challenges of the region. The local educators received extensive training with JGI and Disney conservation educators on how to deliver conservation lessons, conduct pre and post evaluations, and lead community meetings. Each educator was also provided with program materials, such as puzzles, cartoon story boards, educational posters, and funds for transportation to deliver the program.

As of July 2012, the educators have delivered the conservation education program in 95 schools to 27,803 children. In cooperation with UGADEC (Union of Associations for Conservation of Gorillas and Development in the East Democratic Republic of Congo), the educators also have held 90 meetings with over 2,400 community members and leaders. In addition to the interactive conservation education lessons and meetings, JGI has erected 10 billboards and hundreds of posters and delivered conservation-themed radio and film programs throughout the communities. These tools not only reinforced information delivered to program participants but also allowed conservation messages to be spread to hundreds of thousands of additional people living in and passing through the Walikale and Lubutu territories. Although we have received much positive feedback on the program, we will re-administer the ape conservation awareness survey in order to systematically evaluate the impact the program is having on people’s knowledge of and attitudes towards ape conservation. We look forward to continuing our work with our partners to foster respect for apes and the laws protecting apes and their habitat.