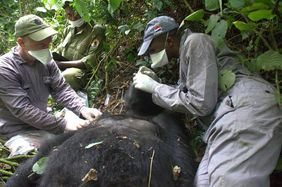 Mike Cranfield and Eddy Kambale collect samples and conduct an exam during the intervention on Mt. Tshiaberimu. (© MGVP/ICCN)

On a small forested island in the western region of the Democratic Republic of the Congo's Virunga National Park, a tiny population of Grauer's gorillas has reduced to one third of its original size within the last decade. Now down to just six individuals in two separate groups, this small population living on Mt. Tshiaberimu has only two females left - and their situation is dire.

At the present time, the Mt. Tshiaberimu gorillas have been classified as Grauer’s gorillas. But while these gorillas are morphologically and genetically Grauer’s, their afromontane forested habitat is more similar to that of the mountain gorilla. Considering that this population has been cut off from the remainder of Congo’s Grauer’s population for an indeterminate amount of time, ape conservationists are eager to conduct a more in-depth genetic analysis on these individuals.

"ICCN [the Congolese Wildlife Authority] recently conducted a study on the long-term survivability of this population using computer modeling. The results indicate that, if the population is left alone, the outcomes are grim" says Eddy Kambale, Gorilla Doctors Head Field Veterinarian in the Democratic Republic of the Congo. "ICCN requested that [Gorilla Doctors] evaluate the health parameters of this population and its habitat in order to determine a future strategy for survival." And so, Gorilla Doctors was tasked with collecting samples from an individual in order to do a complete genome analysis of this group.

On March 13, 2013, Gorilla Doctors traveled to Mt. Tshiaberimu to conduct an intervention and collect blood, hair, buccal swabs, fecal and skin samples from an individual for health and genetic studies. In doing this intervention, Gorilla Doctors, along with its partners at the ICCN, want to evaluate the overall health of the population and successfully map the whole genome of the species, to determine how closely related they may be to either or both eastern lowland and mountain gorillas.

During the intervention, Gorilla Doctors Co-Director Mike Cranfield, along with DRC veternarians Eddy Kambale and Martin Kabuyaya, anesthetized 10-year-old blackback Mukokya in order to take the samples. Within this small group, there is one silverback, one female and two blackbacks. Gorilla Doctors felt that performing the intervention on one of the blackbacks would be the least disruptive for the group. After a short time under anesthesia for sample collection, Mukokya woke up and joined the rest of his group without incident. The intervention was a success.

Additionally, a clinical workup will also be completed to try and gain some insight into the hepatic and cardiac lesions seen on previous postmortem examinations by Gorilla Doctors Veterinary Pathologist Linda Lowenstine.

Having examined tissues from four Mt. Tshiaberimu gorillas (two silverbacks, one adult female and a juvenile male), Linda Lowenstein reported that "two of the adults had changes in the liver suggestive of exposure to a toxin; changes were severe and may have contributed to death in the female and a silverback." She added "I have occasionally seen similar changes in the mountain gorillas, but always as a minor incidental finding. My main concern is for ingestion of poisonous plants, such as Senecio, that contain pyrrolizidine alkaloids, and I wondered if the Mt. Tshiaberimu gorillas were eating something they might not usually eat because of human encroachment. But, or course, this is just speculation at this point."

Interestingly, the Mt. Tshiaberimu gorillas have also exhibited heart changes suggesting hypertension, something typically seen in the hearts of captive western lowland gorillas. Similar lesions have been seen in mountain gorillas, but were much more mild.

As a background health check, a serological survey will be done on the blood collected, to determine the illnesses that this group has been exposed to. Moreover, two skin biopsies were taken. Data from the samples will be coming in over the next six months.

"We went in to solve a puzzle" said Mike Cranfield. "We want to find out why there was a sudden decline in the population, the cause of the liver troubles and where, taxonomically, these animals fit so that a comprehensive plan for the population can be undertaken." This is just the start of many issues that have to be examined by ICCN and their partners before the plan can be completed.

Could this population be a novel subspecies different from the mountain gorillas and Grauer’s gorillas? And what will it take to save this isolated group of gorillas? The conservation partners involved are working hard to determine the answers to these critical questions, and hopefully, save this vulnerable and unique group of Congolese gorillas.