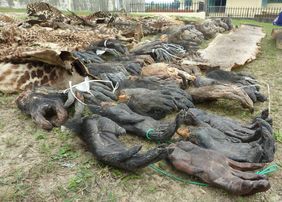 The critical situation of the elephants and the great apes, and their role in the regeneration of the tropical forest, are well documented and broadcast by the media. This awareness has resulted in several donor and partner initiatives to protect the African tropical forests and their biodiversity, both government and non-government, such as the Great Apes Survival Partnership (GRASP), IUCN, CARPE (Central African Regional Program in the Environment), the Conference of Ministers in Charge of Forests in Central Africa (COMIFAC), and CITES. Regardless, the number of species becoming threatened increases all the time and numerous populations are facing extinction.
Illegal hunting is the most immediate threat for several populations of great apes and elephants in Central Africa. The poverty of the local populations and the low level of funding available to administrations and conservation projects are frequently named as the causes of unsatisfactory results and solutions. The problem, however, is more complex than that. The weak application of national laws and international conventions is as much a result of ingrained corruption as a consequence of a lack of solutions proposed by the different stakeholders (Lagrot 2007; PALF 2009; LAGA 2009; Mathot 2010).
Various pseudo-repressive conservation actions have been applied, frequently by partnerships between government organisations and NGOs, but they seem mostly to target the occasional users of old and usually handmade guns. Dura lex sed lex: but justice is supposed to be the same for everybody. However, the "big fish" often manage to slip through the net, which seems to stretch and contract at their whim. This ostensibly neutral net seems somehow at risk of breaking under the weight of the impunity secured by the famous "traffic of influence" and other forms of corruption.
As a result, commercial and intensive hunting of protected species goes on in many regions almost without restriction, whether it is hunting for meat, trophies, ivory, skins, or live baby apes.
Due to the repeated failure of conservation strategies developed in Central Africa and other regions of the world, complementary and innovative actions need to be conceived and conducted. While long-term measures for the sensitisation of the population or for the development of alternative income and protein sources are advocated, the risk is great that the species currently under threat will already have disappeared by the time the solutions are implemented.
Effective law enforcement is an indispensable and direct prerequisite if the immediate threat is to be reduced and the long-term survival of these species made possible. Some NGOs and projects have already established a methodology to allow for effective law enforcement and for the fight against hunting and illegal trade at a national level, implementing programmes incorporating investigation, arrests, legal follow-up and media coverage.

To achieve these objectives, the projects are supported by various organisations such as the US Fish and Wildlife Service, the COMIFAC, the UN, the Accord de Lusaka, the Embassies of the US, France, Great Britain, the Netherlands, EU delegations, several foundations, NGO partners such as WCS, WWF, TAF, Brainforest, and of course by the respective governments, particularly the ministries in charge of wildlife.

First results
Since its initiation 6 months ago, AALF has already obtained positive results - in spite of the inevitable difficulties.
Investigations. Three Gabonese and one expatriate investigator have conducted investigations into ivory trafficking in Libreville and the interior of Gabon. The illegal trade and trafficking of ivory are apparent and could be documented both in Libreville and in the interior. The illegal trade in ivory carvings is declining, but trafficking of raw ivory is well developed and carried out by well-organised criminal networks. Several old ivory carvers have in fact confirmed this trend and the redeployment of their colleagues from carving to selling raw ivory on a much larger scale.
The great majority of the criminal networks organising the trafficking are directed by foreigners, but often supported or facilitated by nationals. While more difficult to apprehend, Asians remain the principal organizers and receivers of the trafficked ivory (O'Connell-Rodwell & Parry-Jones 2002; TRAFFIC 2010; Lagrot 2007).
Several trafficking circuits have been documented in Gabon. Trafficking is obviously ruled by demand and prices in the different stages of the marketing chain. The going prices (in CFA francs per kg) are approximately

The hunting of great apes remains equally problematic. Investigations carried out in Libreville have shown that their consumption continues and that they are frequently used for medical/magical purposes.
Finally, leopard skins are traded in Libreville for decorative and traditional purposes. Networks for the trade in these skins exist in the interior, but they are also oriented towards international markets.
Arrests. Based on information obtained by AALF, the Ministry of Water and Forests, in cooperation with counter-intelligence officers, have carried out 3 series of arrests. With logistic and technical support, AALF has directly contributed to this success.
The first operation was conducted on 26th November 2010. On this occasion, 12 ivory sellers and one carver, whose workshop had been searched, were arrested. They were all foreigners (10 Senegalese and 3 Cameroonians). A total of 105 kg of carved ivory was confiscated.
A second operation took place on 13th January 2011. Five offenders were arrested by counter-intelligence officers and officers of the Ministry of Water and Forests. They were caught red-handed keeping and trading 12 leopard skins and one lion skin, 32 hands and 13 heads of gorillas and chimpanzees, 5 elephant tusks and many skins of other species. Unfortunately, two identified traffickers managed to escape during the operation. One of them was finally arrested on 11th February 2011. Five of the 6 arrested traffickers were Nigerian, the sixth came from Benin. This was the most important confiscation ever of great apes trophies in Africa! Confiscation of so many leopard skins is also a very rare occasion in central Africa.
Finally, another operation was carried out on 27th January 2011 against a Gabonese citizen who was intending to sell a chimpanzee orphan whose mother he had killed.
Legal follow-up. 17 wildlife law offenders were brought to court. In spite of the direct involvement of the office of the public prosecutor and the public prosecutor himself, the initial decisions on the case of the great apes were disappointing. In fact, the accused were discharged - but an appeal was launched such that the legal procedure is still underway. In contrast, the carved ivory sellers are still behind bars, four and a half months after their arrest.
Another result of the involvement of the Law Department is the production of a guide containing the legislation relevant to wildlife. 3,000 copies will be printed for distribution among the police, members of the legal professions (prosecutors, judges, lawyers, etc.) and among the staff of the Ministry of Water and Forests and of nature conservation NGOs.
Media. Between December 2010 and March 2011, 89 articles have been published by various representatives of the national and international press. Many news articles also appear on the Internet.
In addition to the main Gabonese media (Union, Gabon Matin, RTG1), important international media have also disseminated the information. Among them are the New York Times, the London Times, the Daily Mail, the Guardian, BBC Wildlife Magazine, BBC Radio and CNN.
Training. Informing and training the relevant authorities in wildlife law enforcement is such an indispensable prerequisite that Conservation Justice has decided to devote itself equally to this aspect.
As a result, AALF, in collaboration with the Ministry for Water and Forests, has been able to organise training sessions at the Gabonese police school. In this way, over 100 officers and over 200 new recruits have been sensitized to wildlife legislation. Over the next months, more policemen will be trained. It should also be noted that training courses on the protection of wildlife will shortly be officially integrated into the training curriculum for policemen, thanks to the initiative of Conservation Justice.
Similarly, 20 judges have been introduced to the new legislation on wildlife protection.
Lastly, Gabonese custom officials are also currently undergoing training.

Conclusions
The success of the first arrests, and the obvious willingness of the police force, the Ministry for Water and Forest and the office of the public prosecutor to condemn these offences, allow us to expect very promising results in Gabon, although the decisions made by the legal system have so far been discouraging and AALF is working closely with the various administrations and partners in order to improve this sad state of affairs. We hope that the collaboration and the support from the authorities, the embassies and the national and international conservation NGOs will continue and be strengthened in order to fight together against the trafficking of wildlife and wildlife products.
Beyond the number of operations and their effectiveness, the impact of the AALF project activities on the decrease of the illegal trade in wildlife products is obvious. In fact, thanks to an intensive use of the media to publicize the obtained results, the population of Libreville and of Gabon in general is already better informed about the legislation and the inherent risks of offending.
The reinforcement of wildlife legislation remains a priority in view of the problems which effective application still faces, and of the growing threats to flagship species subjected to excessive international trade. We hope that the various donors, NGOs and state organisations are aware of this and that they will become more involved in similar projects and contribute to the experience already gained in Cameroon, Congo, Gabon, Central Africa and other parts of the world.