The "Walk through the Dja" 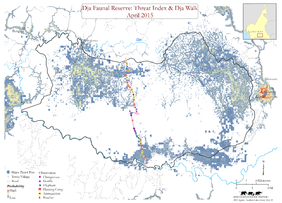 The conservation action plan for western lowland gorillas and central chimpanzees identifies 18 priority landscapes (IUCN 2014). One of them is the Dja landscape with its 5,260 km² Dja Faunal Reserve (DFR). Inscribed as a World Heritage Site in 1987, there is increasing evidence that the Outstanding Universal Values of this protected area are under growing threat. Hunting exists at an alarming level, and agro-industry and infrastructure development are accelerating the threats. Without adequate control measures, this important site will soon be listed as a World Heritage in Danger.

The African Ape Initiative (AAI) of the African Wildlife Foundation (AWF): This program was established with the ambitious goal of protecting representative populations of all 9 African great ape subspecies and their critical habitat (Dupain 2013). At the onset of the AAI and in concordance with the IUCN Action Plan, the DFR was identified as a priority AAI site. Joint scoping missions to identify priority needs revealed a typical doughnut shaped conservation syndrome: several active conservation projects on the periphery of this landscape, but no effective anti-poaching efforts occurring within the DFR. Poaching was and remains rife. In response to this, and backed by an agreement signed with the Service de Conservation-DFR (SC-DFR), AWF offered support for verifiable and accountable anti-poaching patrols using emerging tools like CyberTracker and SMART.

During set up and initial implementation, we witnessed significant evidence of widespread uncontrolled poaching throughout the DFR. We started doubting whether our conservation efforts would have the desired impact. Simultaneously, we were confronted with a body of contradictory anecdotal information on absence/presence of elephants, apes, large mammals, permanent hunting camps, and professional poachers in the core area of this World Heritage Site.

These conflicting accounts about the status of the reserve core motivated AAI to lead a unique 5-day trek crossing the DFR from south to north in April 2015. The objective was to get first-hand qualitative insight on the status of wildlife and poaching in the reserve core. The findings from the walk, although biased and qualitative, confirmed the serious poaching threat. The unexpectantly high number of permanent hunting camps encountered and stories from the poachers confronted in the DFR confirmed a dire need for a change of strategy to ensure effective protection.

This report summarizes activities that led to today’s AAI strategy to protect the Outstanding Universal Values of this World Heritage Site, including results from anti-poaching patrols using CyberTracker/SMART in 2015 through 2016. Patrol observation informed spatially explicit modelling of threats and wildlife populations in the DFR. We subsequently presented findings of the "Walk through the Dja" which we used to test the spatial models. These models can inform changes in the anti-poaching strategy and coverage towards more effective protection of an important sector of the World Heritage Site.

Patrols are carried out following pre-identified routing, using a PDA equipped with the CyberTracker App for download to a computer running SMART. While AAI-supported anti-poaching patrol efforts at Dja span September 2013 through March 2016, we limit ourselves to the data from February 2015.

The Walk through the Dja

On April 25, a team of 7 friends of conservation accompanied by 8 porters embarked on a walk through the Dja. Led by 3 rangers of the SC-RFD, the group recorded observations as according to usual anti-poaching patrols. The 98 km crossing took 5 days.

The walk started after crossing the Dja river, north of Djoum. On day 1, the clearing of Bali was reached. Despite stories of regular visits by elephants and large mammals at this clearing, remarkably little evidence of this was found on site.

On day 2, we progressed north following elephant paths. The forest was silent with almost no vocalizations of hornbills or monkeys or fresh indications of larger mammals. Many signs of human hunting pressure were encountered. We stayed overnight at an abandoned hunting camp that was probably used by a mixed group of Bantu commander and Pygmy hunters, hinting possible specialized elephant hunting.

On day 3, by midday, we ran into a poacher, well known to our ranger-guides. The poacher guided us to their hunting camp where 3 other companions were waiting for him. On this particular day, despite leaving early morning and being equipped with a gun, his catch was limited to 1 duiker. Together with his colleagues, the total catch of almost a week in the core area of the DFR was less than 10 monkeys and forest duikers.

Day 4 and 5, the poachers guided us to the northern periphery of the DFR, following well established poaching trails, crossing a series of well-known hunting camps. We stayed the 4th night at the clearing Koubal, again with little sign of mammals. There was a feeling of discouragement because of the limited evidence of large mammals contrasted with continuous signs of human hunting pressure. This was acknowledged by the rangers of the SC-RFD.

We intersected observations from anti-poaching patrols and satellite image profiles of cultivation, deforestation, and fire against a set of spatial layers representing socio-economic (e.g., land use, roads) and biophysical influences (e.g., topography, climate) to model wildlife population and threat distributions. We used Maximum Entropy Modeling (MaxEnt), an algorithm widely used for its relative simplicity and strong performance. We combined individual threat-risk models of hunting camps, ammunition and snares, fire, cultivation-expansion, and deforestation into one threat index. Accordingly, we combined models for chimpanzees, elephants, lowland gorillas into a wildlife index. To test if our models provide SC-RFD managers with actionable adaptive management information, we intersected the independent "Walk" observations against relevant spatial models. We built on the premise that if validated, these models can provide SC-RFD managers with actionable information for more effective adaptive management.

Representing only 4% of the DFR region, these areas could be targeted for more impactful and cost-effective law enforcement responses.

General observation: The anti-poaching patrols and the findings of the “Walk through the Dja” clearly indicate that the DFR is under serious threat. While we found signs of all large mammals expected, indices of abundance are very low while indices of human hunting pressure are very high. This despite more than 2 years of support for anti-poaching and assurance from individuals of the SC-RFD on a positive impact. In 2001, Nzooh Dongmo reported about 71 hunting camps along 1,500 km of transects in the DFR. Fifteen years later, we can report about 200 hunting camps along a similar 1,400 km of transects. The situation has only worsened. Based on these findings, we assume that our initial support to the SC-RFD is not having the desired impact and that there is a dire need to revisit our approach.

Spatial model validation and implications for next steps: The validations confirm that the threat index and deforestation models offer value for improved targeting of future patrols and other management actions. We consider these models to be preliminary and expect improvement with more comprehensive patrol coverage over time and refined modeling processes. Recognizing that patrol and satellite image model drivers are frequently updated, streamlined updating of the models could produce a dynamic law enforcement platform catering to more agile management responses. While we are further developing these models and testing the use of them for more effective management, we will focus over the next months on our revised anti-poaching efforts.

Next steps: AWF-AAI together with the new team of the SC-RFD jointly decided to stop trying to cover the 5,260 km² DFR as both financial and human resources are still lacking. Instead, we opt for effective protection of three spatially well-defined priority areas: we installed permanent patrol posts at three inselberghs in the northern half of the DFR - Chouam, Koubal and Bouamir. Around the 3 strategic points, with permanently stationed patrol teams consisting of 4 SC-DFR rangers and 2 representatives of the local communities. During their assignment, teams perform CyberTracker/SMART guided patrols while camera traps provide continuous monitoring of large mammal visits. Simultaneously, efforts are done to sweep the northern periphery for presence of poachers and screen the area for presence of hunting guns. Local communities are involved in regular meetings with the SC-RFD and AWF to discuss latest findings and ways forward.

We hope that by the end of 2016, there will be verifiable evidence that by securing these strategic points, it translates to increased visits by large mammals and that this new strategy is ready for replication elsewhere in the World Heritage Site.

We thank the Ministry of Forestry and Wildlife and the Service de Conservation de la Réserve de Faune du Dja for the collaboration and partnership in our joint efforts to improve the protection of the DFR. Thanks especially to Serge Meye and Stephan Madjaye of the SC-RFD for the guidance during the walk. Thanks to the conservationists that took up the challenge: Thomas Bacha, Denis Beauquesne, Olivier Braun, Julien Cour, Carl Frosio, Juliet Wright, and the 8 porters!