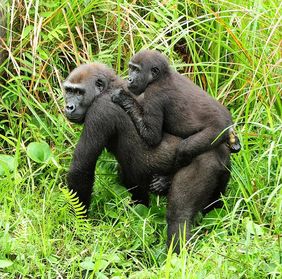 Female and offspring in the bai (© Max Hurdebourcq) 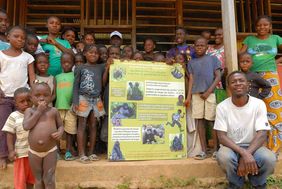 The Bambidie Gorilla Project (BGP), founded in 2008, aims to preserve a population of western lowland go­ril­las, between the villages of Lastour­ville and Okondja, in eastern Gabon. This area is in the middle of a for­estry concession operated by the Com­pagnie Equatoriale des Bois (CEB - Equatorial Forest Company), one of the leading companies in the Gabonese forestry sector. The area contains a varied and abundant fauna, including large mammals such as gorillas, forest elephants and chimpanzees. These species are, however, facing the usual threats that arise both inside and outside of Africa: habitat destruction and fragmentation, poaching for bushmeat, and the illegal trade in wildlife.

In order to safeguard the long-term future of the gorillas in the concession, the BGP has cooperated with the CEB to establish several objectives, specifically:

The concession extends over an area of 600,000 ha and produces approximately 220,000 m³ of round wood per year, mostly Okoumé, re­nowned for its light weight and the ease with which it can be used. The main Bambidie camp coordinates ex­ploitation activities (i.e. tree felling) and transformation activities (sawmills and kilns). It employs 450 workers, but taking into account their families the number of people at the site reaches about 2,000.

In 2007, the Swiss company Precious Wood became the main shareholder of CEB. In 2008, the concession obtained FSC (Forest Stewardship Council) certification, which certifies the sustainable exploitation of forest resources in accordance with very strict environmental, social and economic rules. This system allows the forest to regenerate, thanks to a regular rotation of timber coupes (selective logging system), and requires the harvesting company to implement activities that support the development of the local communities and the conservation of the environment.

CEB prefers to get involved particularly in the provision of drinking water and electricity, the construction of health centres and schools, the battle against pollution, the creation of a tree nursery for reforestation, the conservation of riverine zones and the sensitization of populations to best practices that help to protect nature on a daily basis. In order to conserve the fauna, the concession controls the forest access roads, and prohibits commercial hunting and the hunting of protected species. In addition, the concession supplies people with animal protein in order to limit the need for bushmeat.

However, even with the award of the FSC label and the application of a rigorous environmental management system by CEB which makes sure its harvesting procedures follow good practice, and the concern shown by the company in conserving global ecosystems, the gorillas still face several threats:

The Role of the Bambidie Gorilla Project

The activities of the Bambidie Gorilla Project take place in the centre of the concession, which contains many gorillas (documented by routine ob­servations carried out in the forest and a 2008 survey by the primatologist Alexandre B. Pujol of Barcelona Uni­versity). Populations of great apes frequently occur outside of national parks and reserves. An evaluation of their capacity to adapt to constraints linked to forest exploitation will permit us to develop conservation plans which are adapted to this particular situation and to determine whether the conservation of the fauna is compatible with reasonable and sustainable forest exploitation.

The person responsible for the pro­ject, Max Hurdebourcq, has con­ducted ten missions, each of 3 to 4 months' duration, into the centre of the concession - both in the dry and the rainy seasons. He has observed numerous gorilla groups and has organized sensitization campaigns for workers and school children on a regular basis.

Habitat protection: Successive trips into the forest have allowed the identification of a feeding site of major importance for the concession gorillas. This is a bai, covering an area of 16 ha. It is regularly visited by animals that go there to feed on aquatic plants rich in minerals. After the bai was found, CEB decided to surround it with a buffer zone of 96 ha which it will not exploit. In this way CEB will preserve a place which is indispensable to the gorillas, both for food and for social interactions.

Education: With the help of various presentations which have been organized in the concession schools, over 2,000 children have been sensitized to the needs of the gorillas. Initially, the programme used the Great Apes Educational Kit developed by Sabrina Krief and the MNHN (National Museum of Natural History) of Paris. Subsequently a generator and a video projector were purchased which allow the showing of films and photographs of the wild gorillas roaming the concession and captive gorillas in La Palmyre Zoo in France. In the concession villages, gorillas are considered to be a source of protein (the meat is preferred to that of chimpanzees, which are considered too close to humans), but also as a dangerous and ferocious animal. By showing that gorilla behaviour is very similar to that of humans, particularly the behaviour of females with their infants, and that it is possible to observe gorillas in the forest without danger, these sessions have made it possible to counteract the negative image of the gorilla and to change people’s opinions of the animal.

Other sensitization sessions have been organized for the concession workers. A poster explaining how to behave when encountering gorillas in the forest has been developed by La Palmyre Zoo. Eight copies have been put up in schools and other places frequented by the Bambidie workers.

Outlook for the Future of the BGP

Currently, the project is at a crossroads: long-term activities need to be de­vel­oped to increase effectiveness and to ensure the sustainability of the project. The creation of a local foundation-like structure involving all BGP stake­holders (authorities and local commun­ities, forestry concession, coordinators, sponsors, etc.) seems indispensable for the provision of a project framework and for helping to raise the funds required for gorilla conservation. Scientific studies need to be conducted, such as studies into gorilla health and diseases, their role in forest regeneration, the impact of forest exploitation on primates, etc. It is equally necessary to create new educational tools and to recruit an educator tasked with implementing sensitization activities.

The socio-economic aspects of the BGP must permit the development of ecotourism as an alternative source of income for the population. The protected bai is an excellent site for an observation platform for tourists. Recruitment and training of trackers for guiding visitors is indispensable.

Currently, BGP is supported only by Precious Wood and La Palmyre Zoo. The development of the proposed new activities requires new partners to provide the funding needed by the founding partners or, for example, to participate in the development of educational tools. Protecting gorillas in a forestry concession represents a true challenge and a beautiful adventure.