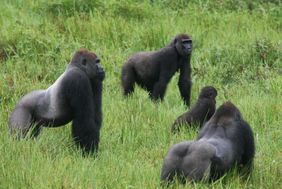 Western gorillas live in social groups that consist of one silverback, several females and immature offspring. Females rely on the silverback who, with his impressive body size, can protect them and their offspring against predators and other adult males. Adult females may transfer between groups multiple times in their lives (also called secondary transfers) and transfer directly during inter-group encounters (Stokes et al. 2003). This strategy is very rare among primates and is believed to represent female choice for a strong and powerful male (Harcourt & Stewart 2007).

Because females rely on silverbacks to protect them and their offspring, they should choose to reside with a male who provides the best protection and is of high strength. Just as in humans and other animals, males vary in their size and power, and as silverbacks age their strength diminishes. As a result, females transfer between social groups but they do not all transfer with the same frequency. Some females will leave a group after each of their offspring is weaned, up to six times in their lives, while other females have stayed with the same silverback for as long as 20 years.

When a silverback dies, all females leave to join a new male. If at that point a female has an infant that is not yet weaned, then the new silverback will most likely kill it (this is called infanticide) in order to breed with the female right away and raise his own offspring. Although infanticide has never been directly observed in western lowland gorillas, it can be inferred when an un-weaned infant disappears after a female has transferred to a new group. Female western gorillas can reduce the likelihood of such infanticide from happening by leaving a male during the limited time window immediately after their offspring was weaned and before they conceive their next offspring. Females then leave their weaned offspring behind with their father.

However, transferring to a new male may also involve costs such as loss of habitat familiarity, higher rates of aggression towards the immigrating female and reproductive delays. Therefore, the optimal strategy for a female to improve her reproductive output over the course of her life may involve a trade-off between the costs of dispersing and the benefits of choosing a more protective male. The timing of dispersal may be essential to improve a female's reproduction.

These different strategies of males and females lead to the following questions: Do female western gorillas suffer higher reproductive costs when they disperse? Do they suffer reproductive costs when they stay with a male near the end of his tenure? What is the best strategy that females should use to improve their reproductive rate? In order to address these questions, we used the data from a 20-year study (1995-2015) of a wild population of western lowland gorillas at Mbeli Bai, in the Nouabale-Ndoki National Park in northern Republic of the Congo. Mbeli Bai is a 13 ha swampy natural forest clearing in the middle of the rain forest, which contains vegetation rich in minerals that attracts numerous groups of gorillas. We observed the gorillas by using telescopes, digital cameras and videos, from a 9 meter-high platform overlooking the clearing and allowing almost 100 % visibility. We identified each gorilla using facial features, body size and pelage coloration. A total of 440 gorillas were observed since the beginning of the study including 229 infants born to 100 adult females in a total of 36 breeding groups.

We found that a higher percentage of infants die if they are born when the male is old and near the end of his tenure compared with infants born when the silverback is in the early years of his tenure (80 % versus 40 % infant mortality). However, we also found that infant mortality was higher at the end of a male's reproductive career even if we exclude males whose tenure ended by their death (65 % versus 30 % infant mortality), suggesting that the male's capability of protecting his offspring against predators or other males is decreasing as he ages and nears the end of his tenure. Therefore, females suffer a reproductive cost by staying with males who are near the end of their tenure and it would be advantageous to transfer to a stronger and younger male.

However, when females transfer to a different male, they have longer intervals between births (5 months longer) and hence fewer births over their lifetime, which is similar to reproductive delays from transferring observed in mountain gorillas (Robbins et al. 2009). These delays can be substantial: females that transferred four times during their life took approximately 10 years longer to produce a surviving offspring compared to females that never transferred. Given the high costs of transferring, a female finds herself in a dilemma when she is with a weaker or older male: should she stay, breed with him again, and risk losing the infant if he dies, or should she leave and suffer a reproductive delay?

Our investigations showed that females suffer the highest cost if their infant dies. Therefore, females should leave a male if they perceive he is weak and unlikely to survive the next 5 years, which is the length of time it takes her to wean a new infant. Yet how do females know when to leave? Many females leave a male long before he dies, suggesting that they may be able to determine when he is getting weaker than other males, potentially using the outcome of aggressive displays between males when they meet as a hint. Whether females do in fact intentionally leave older males and join younger and stronger males still remains to be determined.

This study contributes to our understanding of the costs and benefits of social living. The male and females form long-term social bonds and can live together for long periods of time. However, they have differing strategies of maximizing their reproductive success. This study sheds light on the mechanisms driving the grouping patterns in gorillas and the dynamic nature of their social groups, which in turn contributes to our understanding of human sociality.