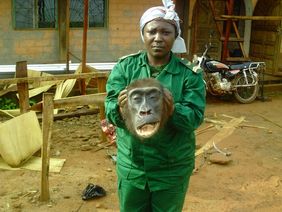 In recent years, the trafficking of Afri­ca's apes has evolved into a highly organized criminal activity, but the situation has remained largely ignor­ed. Increasing enforcement of laws around the continent has played an important role in uncovering and re­porting what may turn out to be the final straw as far as ape conservation is concerned - the professionalism of traffickers. In January 2006, wildlife law enforcement officials in Cameroon arrested a trafficker, some 130 km from the capital city, Yaounde. He was arrested while in possession of a young chimpanzee alongside 4 large sacks of marijuana, each weighing at least 50 kg, and another kind of drug which he admitted to be cocaine. The drugs and apes dealer had been employing at least 5 poachers and, before his arrest, he regularly traded in other protected primate species. The organizational capacity needed to carry out his activities highlighted what it takes to do a successful business, illegal wildlife trade in this case. Great ape trafficking may have been raised to a high profile professional illegal activity on the African continent. This is demonstrated by the manner in which powerful traffickers use their perfected operational skill to run the illicit trade alongside other illegal ac­tivity such as the trade in drugs. The connection between drugs and wildlife trafficking, and increasing prices for wildlife products, are attracting criminal syndicates with vast experience in organized crime, as is typical for drug syndicates.

This high level of organization has been observed in many other wildlife cases. Wildlife law enforcement operations in Cameroon, following the intensification of the fight against wildlife trafficking in the country, uncovered determined and organized criminal activity. Four young gorillas were smuggled from Cameroon in 2006 through Nigeria to Taiping zoo in Malaysia. The animals ended up in a South African zoo. It took the combined efforts of both the Cameroonian and South African governments and animal welfare non-governmental organizations to arrange for the gorillas to be returned to their homeland, Cameroon. Smuggling four gorillas, travelling through many countries, across thousands of miles and through several check points, needed sophisticated logistics and organization; it needed an organized group of traffickers with substantial financial resources. Ape traffickers seemingly have all of these and even more, as more operations in the Cameroon would reveal. Some of the trafficking is carried out using a different strategy and tactic but with equal seriousness - and devastating impact.

The arrest of a cyber-trafficker in South West Province, Cameroon in January 2009 was significant in that it revealed changing strategies and tactics. The man had previously shipped 22 consignments of primate skulls to the United States from his base, using the internet. He admitted to having turned over revenue to the tune of 22,000 US$ and to have been conducting wildlife trafficking over the internet for 2 years. This operation emphasised the extent of the illegal trade in primates to distant places and the profile of today’s trafficker who is able to use modern technology to his advantage. The use of modern technology is clearly opening up new avenues for trafficking and even working to complement traditional trafficking methods.

In December 2005, on board a French flight en route to Russia from Kinshasa were a Ukrainian and a Congolese with a French passport and in the bag they were ferrying was a baby bonobo. They had a permit from the Congolese Ministry of Agriculture, and this suggested that this was something that had been done before. French officials stopped the two but were rather more concerned about fears of the spread of the ebola virus than about the trafficking itself, and the pair were allowed to continue their journey with the bonobo. Similarly, the seizure by French customs officials at Paris’s Charles de Gaulle airport of huge quantities of bushmeat from passengers travelling aboard a French flight from Bangui demonstrates the scope of the trade, and the involvement of a former Central African prime minister, whose luggage contained meat from protected primate species, points to high level involvement in trafficking. The prime minister was simply fined. Apes, specifically, chimpanzees and gorillas, and their meat constitute an important proportion of the illegal trade in wildlife species on the continent today.

The case of Guinea is very specific and revealing on the issue. The country has been identified as a centre for professional and organized trafficking in live apes. A recent report by the brand new Guinean wildlife law enforcement support project, known by its French acronym GALF, states that over 100 chimpanzees and 10 gorillas were illegally exported from the country since 2010. The preferred destination for apes leaving Guinea is China. Investigations and operations carried out in June and July of 2012 led to the arrest of a Chinese national in Guinea who implicated two others in the trafficking of 3 chimpanzees which were about to be exported to China.

The growing severity of trafficking in apes in recent years has been compounded by Chinese involvement in the trade. With a burgeoning middle class in China, illegal trade on the continent is growing extremely fast to satisfy the demand in China and other Asian economies. Chinese involvement in the illegal ivory trade has long been established and its consequences are widely known, but an equally worrying trade in apes by Chinese nationals exists alongside the trade in ivory. The growing significance of ape trafficking and its devastating effect on wildlife populations is gradually becoming apparent, and many are now beginning to realise how dangerous and important is the trade. According to the GALF report, live chimpanzee trafficking in Guinea is flourishing and involves many other nationalities including Lebanese, Americans and Spaniards, and the case of an American who comes into the country every year to buy chimpanzees is reported by GALF officials.

Countless stories of similar gravity may explain the worsening crisis facing Africa's great apes. Every African country has suffered, with increasing profit margins for ape traffickers. This is boosting the trade and attracting all sorts of people, from the small time local trafficker who kills apes in the wild for their meat and orphans, to the big time criminal syndicates who are generally after live apes, doing big business and earning huge profits. The trade is shifting its momentum from simple bushmeat trade, involving locals only, to major transnational activity attracting professionals. The consequences may just be too strong to bear.