Seed Dispersal by Western Lowland Gorillas: from Fruits to Seedlings 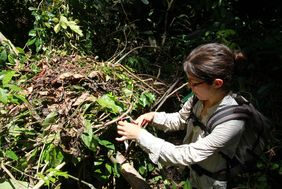 African tropical rainforests, the second most important biodiversity refuge after the Amazonian basin, host a multitude of plant species. The majority of them (from 50 to 95 %) produce fleshy fruits that are adapted to vertebrate consumption, and hence animal-mediated seed dispersal. Indeed, forest wildlife species ensure important ecological functions for the dynamics of Congo Basin forests through their roles as seed dispersers, seed predators, browsers and grazers, and so on. But many animal species, especially large mammals, are facing sharp declines and local extinctions, caused by anthropogenic disturbances such as commercial hunting and habitat degradation.

The western lowland gorilla is one of the largest African forest animals, and it is supposed to act as an important seed disperser, and indeed this critically endangered species has a highly frugivorous diet and consumes a wide variety of fruit species, whose seeds are swallowed, and excreted intact and viable. Gorillas deposit more than half of their faeces, and therefore half of the seeds they disperse, at their nesting sites. As these sites are preferentially installed in areas of the forest with open canopy, gorilla-dispersed seeds potentially benefit from high light availability. For this reason, western lowland gorillas are thought to provide directed dispersal to many plant species, but the different components of seed dispersal by gorillas were still poorly known until recently.

In the last 7 years, two scientific studies have been conducted in the tropical forest of Cameroon and Gabon. In Cameroon, La Belgique is a 40 km² research site located in the northern periphery of the Dja Reserve. The site has never been logged but human-made modification of the forest is evident locally by the presence of emergent palm oil trees (Elaeis guineensis, Arecaceae), which suggests abandoned village sites, and old cocoa plantations. In Gabon, the study site is located within a sustainably-managed logging concession in the southeast of the country (Precious Woods Gabon logging concession). A first timber harvesting cycle occurred from 1987 to 2014 in the concession, and the second rotation was underway during our study.

Both sites are covered mainly by secondary forest, and to a lesser extent flooded areas, and harbour western lowland gorilla populations that are not habituated to human presence. The aims of these studies were (1) to document the variety of dispersed species at both study sites, and particularly to identify potential tight plant-gorilla relationships; (2) to assess the viability of dispersed seeds and determine the impact of gut passage on seed germination; (3) to evaluate the contribution of western lowland gorilla in the dispersal of a timber and non-timber forest product tree, Dacryodes normandii (Burseraceae); and (4) to test the effect of seed deposition conditions (presence of faecal matrix and deposition at open-canopy nest sites) on seedling development. As most seeds are deposited close to nests, nest sites were characterised (in terms of vegetation types, canopy openness and dung beetle community) at both study sites. Research activities focusing on gorilla seed dispersal were undertaken from 2009 to 2014 in Cameroon, and from 2011 to 2014 in Gabon.

At La Belgique Research site in Cameroon, faecal collection and analysis were done in order to identify the species dispersed by gorillas and quantify the number of seeds per faecal unit. Whenever possible, comparative germination trials were undertaken to evaluate the impact of passage through the gut on seed germination success and germination latency (number of days from deposition to emergence). In order to provide gut-passed seeds for those trials, feeding sessions with captive western lowland gorillas were undertaken in Limbe Wildlife Centre (Cameroon). They also allowed estimation of the retention time of ingested seeds, and testing of its effect on germination success.

Our results showed that gorillas disperse a wide variety of species, which are highly diverse in terms of size, shape, fruit type, life-form (including large, medium and small trees, lianas, herbs) and regeneration guild. At this study site, the seeds of at least 58 species were found in gorilla faeces. Most of the seeds belonged to trees (44 species, 75.9 %). Dispersed seeds originated mainly from fleshy fruits, but some species with fibrous fruits and pods, such as Tetrapleura tetraptera, were also found in gorilla faeces. Gorilla seed load was dominated by a few taxa (e.g. Uapaca spp., Landolphia spp., Cissus dincklagei, Marantochloa filipes),probably reﬂecting patterns of seasonal fruit availability and diet preferences. One third of the seed load belonged to the genus Uapaca.

Seed gut retention time was assessed for five species: Antrocaryon klaineanum, Pseudospondias longifolia, P. microcarpa and Trichoscypha acuminata (Anacardiaceae) and Myrianthus arboreus (Moraceae). It varied from less than 8 to as much as 188 hours, and averaged 50.6 ± 28.2 h. Most seeds were excreted after 32 to 48 h. The length of retention in the gorilla gut increased germination success for only one out of five tested species (M. arboreus), and had no effect for the other species. Considering the effect of gut passage, it was positive for three of the five tested species, and negative for one of them. Seed germination latency was not influenced by gut retention time, but the passage of seeds through the digestive tract affected germination latency, with those passed through the gut germinating faster in the case of two species (M. arboreus and T. acuminata)and more slowly in the case of one species (P. longifolia), only because of pulp removal.

At this study site, gorilla nest sites were characterized by a more open, less dense and more disrupted canopy. They displayed higher densities of light demanding species, in particular pioneers, and "young" trees with diameters of 10-19.9 cm. They were mostly installed in young secondary forest and canopy gaps, although all habitat types were used for nesting. Seedlings that developed from faeces deposited at gorilla nest sites had a higher probability of recruitment/establishment and a higher growth rate than those from other sites.

In Gabon, direct (with binoculars) and indirect (with camera-traps) observations were realised in order to identify the animal species that were implicated in the predation and the dispersal of the seeds of the timber species Dacryodes normandii (Burseraceae), and specifically to assess the contribution of gorillas in seed dispersal process.

The western lowland gorilla is identified as the main disperser of this species, as it displayed the highest frequency of consumption (88 % of gorilla visits involved fruit consumption and seed swallowing) and the longest visit duration (83 minutes on average). Seeds passed through the gorilla gut were excreted intact in faeces. They exhibited a high germination success (68 % on average), which was not significantly different from that of seeds extracted from fresh fruits (average germination success = 73 %). The chimpanzee (Pan troglodytes troglodytes) is also an important disperser of D. normandii seeds, while the African forest elephant (Loxodonta cyclotis), the putty-nosed monkey (Cercopithecus nictitans nictitans), the white-crested hornbill (Tropicranus albocristatus) and the great blue turaco (Corythaeola cristata) are dispersers of lesser importance.

We selected four tree species typical of the study area in Gabon to assess the impact of faecal matrix and deposition site on seedling development: D. normandii and S. trimera (Burseraceae), Plagiostyles africana (Euphorbiaceae) and Chrysophyllum lacourtianum (Sapotaceae). These species are evergreen, shade-bearing (S. trimera, D. normandii and C. lacourtianum) or non-pioneer light-demanding species (P. africana). They all provide valuable non-timber forest products for food, medicinal or cultural purposes. C. lacourtianum and D. normandii are also harvested by industrial companies for timber production. To assess the effect of faecal matrix on seedling growth, seeds of S. trimera, C. lacourtianum and P. africana collected from gorilla faeces were sown in a nursery with and without faecal matrix. Seedlings of S. trimera and D. normandii were installed at nest sites and at closed canopy forest sites to evaluate the impact of seed deposition, and especially of light availability, on seedling development.

Gorilla nests at the study site in Gabon were preferentially installed in open-canopy forest, as has been observed in other research sites all over the Congo Basin. Their canopy was significantly more open than is observed on average at the study site.

Conclusions and Implications for the Dynamics of Tropical Forests

The combined results of these scientific researches highlight the importance of the western lowland gorilla in the regeneration and dynamics of Congo Basin forests. Indeed, gorillas were observed to be implicated in the dispersal of the seeds of a high number of varied plant species. The seeds are excreted intact and viable, and some of them benefit from the passage through the digestive tracts of gorillas. Moreover, the long gut retention time, large home range and daily travel distance of western lowland gorillas offer potentially effective long-distance dispersal, a phenomenon which adds to the potential effectiveness of its seed dispersal services.

At both sites, gorilla nest sites were observed to be preferentially installed in habitats characterized by an open canopy. Our results confirmed that the seedlings of gorilla dispersed plant species display enhanced development at nest sites, because of the favourable light conditions. In this regard, the western lowland gorilla provides directed seed dispersal, an important but rare process among vertebrate dispersers. In Gabon, we highlighted the impact of gorilla seed deposition, i.e. presence of faecal matrix and open canopy at deposition sites, on seedling development of four tree species, characteristic of the forest of the Gabonese forest and economically valuable.

The results from Cameroon and from other study sites show that a number of additional species, exploited for their timber and non-timber forest products, also rely on gorillas for seed dispersal (e.g. Pseudospondiasmicrocarpa and Trichoscypha spp. (Anacardiaceae), Naucleadidderrichi (Euphorbiaceae), Dialium spp. (Fabaceae), Myrianthusarboreus (Moraceae)). The gorilla was observed to be the main disperser of the timber species Dacryodes normandii, and could possibly play a similar role for other commercially important trees. Thus, the dispersal services performed by gorillas within the forest ecosystem are both environmentally and economically essential. They seem to be particularly important in the context of logged forest and sustainable forest management. These studies encourage the implementation of gorilla conservation strategies as critical to ensuring the preservation of tropical forest ecosystems.