Response to Oil Prospecting in Gabon 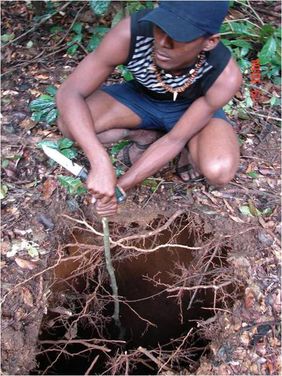 A hole for the dynamite is prepared. (© Luisa Rabanal)

As the world's oil reserves continue to decline, interest from major petroleum companies in the largely unexploited reserves of African oil increases. In 2005 the Chinese petroleum company, Sinopec, was granted a concession for oil exploration in Gabon's Loango National Park, an area which acts as a stronghold for populations of endangered western gorillas, chimpanzees, forest elephants, and many other species of large mammals. Most of the information regarding how apes are affected by extraction of natural resources from forests comes from studies on the impacts of logging (Tutin & Fernandez 1984; White & Tutin 1996; Arnhem et al. 1998). We were able to expand on this knowledge by investigating the impact of seismic operations in Loango National Park, where we established a long-term field site for gorilla and chimpanzee research in 2005.
Seismic operations using dynamite explosions began in the park in 2006 in the absence of clear environmental regulations. We were not able to study the impact of these operations initially due to the speed at which seismic operations began. Following the first period of oil exploration an ecological and sociological impact assessment study was instigated by the Gabonese Ministry of the Environment. As a result, several requirements to limit the impact on the flora and fauna of the park were established prior to the second phase of oil exploration in 2007. These environmental guidelines led to what could be considered a relatively low-impact seismic operation, which should be kept in mind when considering our results.
We aimed to determine if the seismic activities, particularly the loud noise of dynamite explosions, would have a negative impact on apes' habitat use (e.g. habitat avoidance). Since previous studies on the impact of intense human-induced noise on a variety of species have highlighted the various ways in which animals of different sizes respond (Klein 1973; McLellan & Shackleton 1988; McCauley et al. 2000), we included a number of species of large mammals in our study. We focused on large fauna (apes, elephants, monkeys and duikers) given their low survival ability as compared to smaller species following habitat disturbance (Johns & Skorupa 1987). Due to the differences in the species' biological characteristics (body size and home range size), we predicted that the large-bodied species (apes and elephants) using larger home ranges would show a response on a larger spatial scale, whereas monkeys and duikers, with their smaller home range sizes, would be less impacted by the exploration activities.
We conducted our study in 80 km² out of 332 km² of the Sinopec exploration in the northeastern zone of the park, located on the other side of a lagoon from our ape research site. For a six month period including before, during and after the 2007 seismic operations we recorded counts along transects of indirect signs of gorillas (Gorilla gorilla gorilla), chimpanzees (Pan troglodytes troglodytes), elephants (Loxodonta cyclotis), duikers (Cephalophus spp.) and monkeys (Cercocebus torquatus, Cercopithecus cephus, C. nictitans, C. pogonias and Lophocebus albigena). A total of 80 line transects of 0.5 km in length were placed systematically over the study area with 40 located on the seismic lines and 40 located 0.4 to 1 km in between seismic lines. Placing transects on both seismic lines and at varying distances from the seismic lines allowed us to examine the distribution of the species in response to the seismic activity. Transects were walked once per month for 6 months. To examine the impact of seismic activity on large mammal distribution we explored how well three different models (small, intermediate and large-scale disturbance) could explain our data. The use of three scales of disturbance allowed us to detect different movements between species in response to the oil exploration.
Our results showed that seismic activity, despite being a low-impact operation, did have a negative impact on certain large endangered rainforest-dwelling mammals. A clear pattern of disturbance was evident for the spatial distribution of both elephants (on all three spatial scales) and ape nests (on the small and intermediate scales). Our encounter rates of monkey and duiker signs, however, were not related to the seismic impact on any spatial scale. In particular we showed that apes and elephants avoided the seismic lines in the four months after the dynamite explosions had finished, but we did not observe this effect for duikers and monkeys. Our results reflect the biology and limitations of movement and ranging patterns of the species. Large mammals (apes and elephants) which were able to move further away from the dynamite explosions, due to their large home ranges, were more affected by seismic operations than smaller territorial mammals (duikers and monkeys) whose movements are more restricted. We do not know the longer term impacts of the seismic operations since the study was not extended further in time.
Our results emphasize that the species living in the area and their patterns of habitat utilization should be considered when establishing guidelines to minimise the impact of any seismic operation. Such guidelines should include the designation of refuge areas where no dynamite explosions will take place. We suggest that impact on endangered species can be minimised by adequately spacing seismic lines and activity in space and time to allow species to move away from the progressive noise disruption.
In regards to gorillas and chimpanzees, the absence of a large-scale impact on their movement patterns should be interpreted with caution. We acknowledge that a range of other behaviours, aside from changes in habitat use, could be affected and we emphasize the need for other analyses to be used, such as hormone and behavioural measures. For example, based on the results of our study, if the apes and smaller mammals were unable to move larger distances from the explosions, it is possible that they experienced other types of physiological stressors and were disturbed by the explosions in other ways. Wildlife responses to oil exploration are complex and future studies should incorporate additional elements of response behaviours where possible and evaluate other types of human disturbance which may occur during the seismic operation (e.g. human traffic).

At the time of writing Loango National Park remains free of seismic activity. Sinopec completed their oil exploration in 2007 and found too little oil for terrestrial extraction to be economically viable

We thank the Conseil National des Parcs Nationaux, now the Agence Nationale des Parcs Nationaux (ANPN), the Direction Générale de l'Environnement (DGE) as well as the Centre National de la Recherche Scientifique et Technique (CENAREST) of Gabon for permission to conduct our research in Loango National Park and Sinopec for allowing us to work within their survey area. We thank the Wildlife Conservation Society (WCS) Gabon and the World Wide Fund for Nature (WWF) for support and collaboration in the early stages of planning this study. Financial support is gratefully acknowledged from Société de la Conservation et Développement (SCD) and the Max Planck Society. E. Guizard, I. Mavesi especially and K. Remanda provided invaluable assistance during the data collection. We are deeply appreciative of the continued logistical support received from SCD, in particular R. Swanborn, WCS, in particular T. Nishihara, and J. Head and L. Mackaga from the Max Planck field team, throughout our monitoring efforts.