Readaptation of an Injured Juvenile 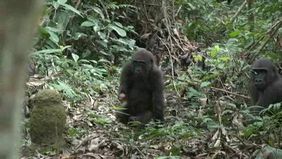 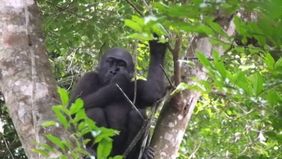 Since 2003, we have been trying to habituate western gorillas (Gorilla gorilla gorilla) for the purpose of scientific research in Moukalaba-Doudou National Park, Gabon. As a result we succeeded in habituating a single gorilla group, Group Gentil (GG) by 2007 (Ando et al. 2008) and now we are able to observe them at a distance of 10~20 m.
Moukalaba-Doudou National Park covers an area of 5,028 km², which is located about 700 km south of the capital city of Gabon, Libreville. Our study site is located in the southeast of the park and covers about 30 km². There is a dry season from May to September and a rainy season from October to April. Annual rainfall is from 1,224 mm to 2,164 mm (2002-2009). Mean monthly maximum and minimum temperatures ranged from 29.2 to 33.2 ºC, and 20.9 to 24.3 ºC respectively. The vegetation in the study area is a mixture of old secondary forest, young secondary forest (Musanga cecropioides dominated), riverine forest and savanna.
GG was composed of 20 individuals - 1 silverback, 1 blackback, 7 females and 11 juveniles - in June 2008. In August 2008, one female, Ngoû, disappeared from the group leaving her infant. When Ngoû disappeared, her son, Petit Ngoû (about 3 years old), injured himself seriously and lost his right forearm.
When we found Petit Ngoû, the wound was still open and there was no hair around. He often licked the wound which sometimes bled. For the first few weeks, he was always lying on the ground, seemed to be losing weight, and he became very weak, but after one month he recovered dramatically. At first he walked using his left hand and legs. After a few days he sometimes walked bipedally feeding with his left hand. We observed him for the first time climbing a tree one month after the injury, using his left hand and legs, and sometimes using his teeth.
Two months after the injury, we saw him feeding in a tree using his left hand and legs. He also rested, lying on a branch at a height of 10 m. After 3 months we observed him using his injured right arm to climb a tree and feed in the tree. While facing his observers, he stood and beat his chest with his left hand. He gradually developed more and more physical ability as the wound healed. Thus Petit Ngoû was able to readapt very well and recover his ability to walk, feed and climb trees.
Other group members cared for Petit Ngoû by staying near him. In particular, the silverback, or the blackback or older juveniles, always stayed by him. We observed many times that another member waited for Petit Ngoû and walked slowly when the group moved. The silverback always defended him, especially from the observers who approached him. One day we saw that Petit Ngoû stayed in a tree when the other group members left. When he started to cry, Upinda (about 5 years old) quickly returned to him and waited for him until he got down from the tree, and they left together. Another day we observed that Petit Ngoû walked holding onto the back of Manbu (about 4 years old), and Manbu adjusted his walking speed to Petit Ngoû's. In contrast, we never observed any of the females caring for him; all females were completely indifferent to the injured juvenile.
We also observed dominance behaviour by Petit Ngoû towards other juveniles. On two occasions, Petit Obono (about 3 years old) allowed Petit Ngoû to pass on a branch. In another case, Petit Obono waited to feed on ants in a hole in a fallen tree until Petit Ngoû left. We saw also that Petit Ngoû was able to feed close to the silverback, while other juveniles were not allowed to do this. From these observations, it can be concluded that a physically handicapped individual does not have disadvantages in the relationships in the group.
Some reports about mountain gorillas have shown that orphans spent more time with the silverback after losing their mother in the group (Stewart 2001; Fossey 1979), and the silverback defended these maternal orphans more than other juveniles (Fossey 1979). In our study site we also observed such a relationship between this maternal orphan and the silverback, but this is the first report of older juveniles caring for a younger juvenile. Our observation seems to reflect the social relationships of western gorillas.
We confirmed that a handicapped individual does not experience any harm from other group members, and the group composition and social relationships do not change if there is an individual with a physical handicap. Gorillas can maintain group composition even if there is a handicapped individual, as long as adult males and juveniles care for it.