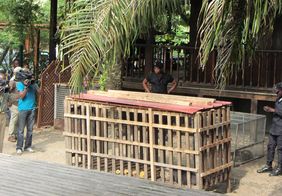 Ministry officials, press reporters and police at the beach restaurant during the confiscation (© ZSL 2012) 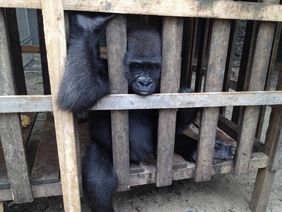 Equatorial Guinea is experiencing a dramatic oil-fuelled economic boom which over the last decade has in­creased incomes, encouraged urban migration and, in the absence of alter­native sources of fresh animal protein, increased demand for bushmeat. Com­mercial hunting has been facilitated by large-scale road development as part of the government's "Roads for Everyone by 2020" scheme. As firearms have be­come more affordable, hunters have switched from trapping to the use of shotguns which has enabled the targeting of primates, including the western lowland gorilla (Kümpel et al. 2008).

The thriving oil and construction industries, as well as other economic opportunities, have led to an influx of expatriate workers who are further impacting on primate populations by creating demand for infants as pets or attractions in restaurants and bars. Expatriates also frequently buy infant primates out of misguided concern, the buyers not realising that by paying money to "rescue" one individual they are fuelling demand and encouraging the killing of more. With no hunting or trade restrictions enforced inside or outside protected areas, gorillas and other primates are under severe pressure.

In response to the scale of the threat that hunting poses to primates and the risk of zoonotic disease transmission, Presidential Decree no. 72/2007 came into force in October 2007 which prohibits the hunting, sale, consumption and possession of all primate species in Equatorial Guinea. Initial sensitization efforts had some impact on the number of primate carcasses detected at bushmeat markets, but the lack of enforcement quickly led to the resumption of hunting and overt trade in endangered species (BBPP 2010).

In June 2012, there were reports from members of the public that an infant gorilla had been acquired and was being kept illegally at an expatriate beach restaurant. Due to the popularity of this restaurant, it was deemed essential to make an example of this case by instigating a high-profile confiscation to dissuade others from buying infant apes. After extensive planning and preparation, the gorilla and two monkeys were successfully confiscated by the government’s Ministry of Fisheries and Environment with support from the Zoological Society of London (ZSL) and Conservation International. The confiscation took place in the presence of the national press and customers at the restaurant who were given information about the law and the negative conservation implications of buying infant primates.

With no facility to house confiscated animals in Equatorial Guinea, assistance was sought from the Pan African Sanctuary Alliance (PASA) and, in collaboration with the Cameroonian government and with logistical support from an oil company, the confiscated primates were transported to sanctuaries in neighbouring Cameroon. The 2-year-old female gorilla, who was named Afangui meaning "a forest of gorillas" in the local Fang language, was transported to the Ape Action Africa sanctuary where she is now readjusting to life with other infant gorillas in the forest. The other primates confiscated, a mandrill and a moustached guenon, were offered sanctuary at the Limbe Wildlife Centre.

The confiscation turned into a catalyst for a government-initiated awareness raising campaign around mainland Equatorial Guinea. Ministry officials distributed leaflets about the Decree and destroyed seized primate carcasses during an initial tour of two districts, and the campaign continues. The collaborative effort between governments, NGOs and the private sector which was required during this confiscation highlights the urgent need for capacity to be built, infrastructure to be developed and a procedural framework to be put in place to enable the Ministry to enforce the law and confiscate live primates independently in future. There is a wealth of regional expertise both in terms of wildlife law enforcement and primate husbandry which needs to be harnessed to develop a strategy for enforcing the law and providing adequate protection for primates in Equatorial Guinea.

ZSL is one of the international conservation organizations with a presence in Equatorial Guinea. The aim of the ZSL project is to work with local communities to develop sustainable alternatives to bushmeat. Becoming directly involved in live animal confiscations is beyond the scope of this project. However, with so few boots on the ground, and given the severity of the problem, there is a need to support such interventions when necessary. Now it is essential that partnerships are developed with experts who can assist further with mitigating this problem.

Building on the momentum that this confiscation has started, funding is being sought to facilitate meetings between regional experts and the Ministry of Fisheries and Environment to assist in developing the necessary procedural framework. The priorities are to review the existing legal framework and suggest appropriate amendments, agree on a strategy for the placement of confiscated primates, continue to raise awareness of the Decree and other wildlife laws at the national level and train law enforcers in the implementation of these laws to ensure appropriate sanctions are levied.

We should not underestimate the role of the Regional Delegate of Fisheries and Environment, Elias Ondo Edjo, which was critical to the success of the gorilla confiscation. Harnessing the political will of champions within the government is essential. It is hoped that through this collaborative process we can help to conserve gorillas and the other 8 species of primate considered at risk of extinction in Equatorial Guinea.

There were many individuals involved with the confiscation and subsequent care of Afangui and the other primates. Since this was the first confiscation of its kind in Equatorial Guinea, the efforts of these individuals to make this confiscation a success were greatly appreciated. In particular, I would like to acknowledge the involvement of Santiago Francisco Engonga, Elias Ondo Edjo and Santiago Biyang Mba from the Ministry of Fisheries and Environment, Heidi Ruffler from Conservation International, Rachel Hogan and Caroline McLaney from Ape Action Africa, Julie Sherman from the Pan African Sanctuary Alliance and Ainare Idoiaga from Limbe Wildlife Centre, as well as Miila Kauppinen who is an intern with ZSL. The ZSL project in Equatorial Guinea works in close collaboration with the government through INDEFOR-AP and is supported by grants from the USFWS Great Ape Conservation Fund, Rufford Foundation, Mohamed bin Zayed Species Conservation Fund, SeaWorld Busch Gardens Conservation Fund and Hess Equatorial Guinea Inc.