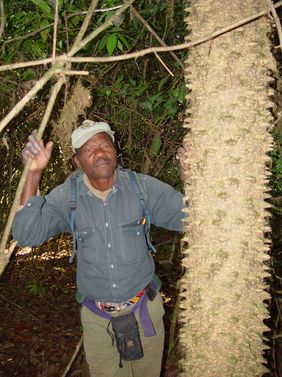 Simon 'Kupe' Ngwese, better known as 'Kupe Cowboy', lived a full life. Born in around 1940, to a poor family in Kupe village, near Tombel, Kupe-Muanenguba division of South West Region, Cameroon, like many around him he grew up as a farmer and opportunistic hunter. Later in life, he worked as a research assistant to the then San Diego Zoo Global project at Mount Kupe in Bakossiland. During the early years of the 21st century he provided one of the most valuable recollections of earlier times: when mammals were encountered frequently in the forests of Durrell's writings, when drills were ambushed through camouflage from under a bed of forest floor leaves, and when rudimentary shotguns were no match for the riches of the seemingly endless forests across what is now known as the Gulf of Guinea biodiversity hotspot, which once covered western Cameroon and eastern Nigeria.

His knowledge facilitated multiple researchers to enter the forests and study elusive animals such as the drill, which had long been thought of as being virtually impossible to see in the wild. It led to the publication of research on the persistence and distribution of these rare primates in Cameroon, and the 'discovery' of the Ebo gorillas in the now celebrated Ebo forest of the Littoral Region, Cameroon.

Kupe's patience and forgiveness of the clumsiness of three-dimensional vision in a four-dimensional forest world borne of years of necessity, not academic whim, led to a partnership with a researcher of rare respect. His long-learned understanding of the forest floor allowed him to move almost silently through forest; his oneness with it never failed to amaze or provoke long hours of thoughtful contemplation of the role of animals in God's world, nor our role in admiring and conserving them.

Unlike many around him, he possessed a sharp social intelligence and honesty, apparent after a piercing glance, (often deliberate) pregnant pause before a carefully chosen suite of words, and devastating retort. This led to hilarity as often as anger; particularly when cushioned by a local beer. His formal education was non-existent; his knowledge boundless. He lived surrounded by respectful others.

Much of that respect may have come from his role in the conflict surrounding independence in Cameroon in the late 1950s and early 1960s. At the time, southwestern Cameroon was, in many places, rife in insurrection as struggles for power raged across much of the country. Kupe was directly involved in acts that today would be seen as insupportable under any circumstance. Similar acts, linked to the claims of Anglophone Cameroonian independence, go unreported in today's national and international media. The parallels are chilling, and not lost. But I, and others, respected him as I knew him. It may be that we are all capable of such actions under certain circumstances; it may be that we are all the same humans at our core.

An emotional reunion after a decade of his 'retirement' from active fieldwork was tempered by beers and recollections of near misses with animal sightings, mountainous road collapses and parochial human conflicts, equally challenging in challenging Cameroon.

Simon 'Kupe' Ngwese is survived by his only child Collins Ngwese.