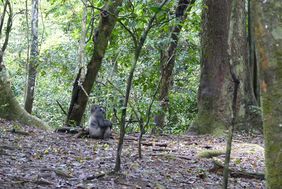 In a paper published in the journal Science Advances, Samantha Strindberg, Fiona Maisels and 52 coauthors provide the most comprehensive assessment to date of western lowland gorilla (Gorilla gorilla gorilla) and central chimpanzee (Pan troglodytes troglodytes) populations (Strindberg et al. 2018). Here, we wish to explain in a little more detail the approach used in this first ever rangewide assessment of these two great ape taxa, in which we examined the weight of each potential driver of their density, which allowed us to estimate abundance across their geographic range and refine their distribution map, as well as investigate population trends in time. Prior to this analysis, no one had assembled time series data from survey sites located across the entire range of either subspecies. This assessment was an essential component of a strategic planning process and builds on work carried out in 2005 and 2013 (Tutin et al. 2005, IUCN 2014) [for background, see Gorilla Journal 50, 20-21].

In the paper "Guns, germs and trees determine density and distribution of gorillas and chimpanzees", we estimate that in 2013 around 360,000 gorillas were living in the forests of Western Equatorial Africa (WEA). The IUCN Red List entry for western lowland gorillas states that "extensive surveys carried out since the mid-2000s have suggested that 150,000-250,000 western lowland gorillas occur in the areas surveyed" (Maisels et al. 2016). Although at face value, the new estimate seems higher than previously reported, we already knew that gorillas were also living in the parts of their geographic range that had not been surveyed - we just didn't know how many. Now we have been able to "fill in the gaps" and come up with the most accurate population estimate to date.

We did this by first identifying the various factors (explanatory variables in statistical parlance: guard presence, previous occurrence of the Ebola virus, canopy height, various human pressure variables, etc.) that previous research had shown to influence great ape density. Subsequently, using data from all sites where surveys of western lowland gorillas and central chimpanzees had taken place, we fitted statistical models that reflect the relationships between great ape density and the explanatory variables. These multi-variable models allowed us to find the combination of explanatory variables that best described the survey data, that is, to identify the model best reflecting the real world system. For each taxon, we selected the model that best explained density and distribution in the areas surveyed, and then used these same models in conjunction with explanatory variable values to produce "predicted density" layers across the entire geographic range (one for each taxon). The abundance estimates were obtained from this density surface, which also defines the distribution of these great apes.

We estimate that almost 20 % of western lowland gorillas were lost between 2005 and 2013, and that they are continuing to decline at an annual rate of 2.7 %, mostly due to poaching for bushmeat, disease, and habitat loss and degradation. By 2020, the total number of western lowland gorillas will be around 300,000, and 25 years from now, the current population size will likely be halved if nothing is done to slow the decline. Although no Ebola virus disease (EVD) outbreaks have been detected in the WEA region since 2005, the virus is still lurking somewhere in the forests of Congo and Gabon. The catastrophic impacts of EVD are well known and if it re-emerges, thousands of great apes could be wiped out in a few months, as happened in Gabon and Congo in the 1990s and early 2000s (e.g., Walsh et al. 2003, Bermejo et al. 2006). Gorilla population density is still high in parts of Congo, and if the disease hits a dense population, it will "burn" through them. Effective EVD control is hampered by the difficulties of timely detection and treatment of outbreaks among unhabituated great apes, so further research into the disease and delivery of vaccines is needed (Ryan & Walsh 2011, Leendertz et al. 2017).

Predictive modelling provides the underlying peer-reviewed science in support of the IUCN action plan. Updating this population model to incorporate survey data collected since 2013 should be part of a mid-term evaluation of the implementation and effectiveness of the activities recommended in the 2015-2025 action plan. In our paper, we reiterate - with more conviction - the most important recommendations formulated in during strategic planning. We advocate for more effective antipoaching and law enforcement for all great ape populations, which will also permit post-disease recovery of populations impacted by EVD. Also key will be rational, integrated land-use planning at national scales to locate economic developments where they will cause the least harm to biodiversity, great apes included.