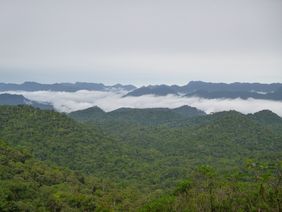 A view of the Ebo Forest (© San Diego Zoo Global)

The Government of Cameroon has proposed two Forest Management Units (FMU) for timber exploitation which completely cover the proposed Ebo National Park in Littoral Region, Cameroon. The ministerial public notices for the FMUs were signed on 4 February 2020, yet only made public on the eve of a series of sensitization meetings in Yabassi and Yingui between 9 and 17 March 2020. The Ebo forest harbours an exceptional diversity of species including gorillas, chimpanzees, drills, Preuss’s red colobus monkeys, Preuss's monkeys, forest elephants, goliath frogs and many newly described plants. The forest is a cultural and ancestral abode, and source of livelihood and health to more than 40 communities along its edge.

The biodiversity and cultural significance of the Ebo forest is of exceptional importance. Firstly, Ebo is the most important tract of intact forest in the Gulf of Guinea Biodiversity Hotspot (Oates et al. 2004). It is thus an important stock of carbon, estimated at 35 million tonnes (Global Forest Watch 2020). Secondly, the forest is a haven for animal and plant species that characterise this biodiversity hotspot yet have been extirpated in other parts of this ecological region (Morgan et al. 2013; Oates et al. 2004). For example, the forest is home to a population of geographically intermediate gorillas (Gorilla gorilla) that is potentially a third subspecies of gorillas in Cameroon. The forest is also home to one of the most important remaining populations of Nigeria-Cameroon chimpanzees (Pan troglodytes ellioti) (Morgan et al. 2011) that have a unique tool use repertoire (being the only chimpanzee population to both crack nuts and fish for termites) (Abwe & Morgan 2008), and the most important remaining drill (Mandillus leucophaeus) population (Morgan et al. 2013). The forest also harbours forest elephants and a wide range of other large mammals, birds, amphibians and reptiles. Several new and threatened plant species unique to the Ebo forest, including Ardisia ebo, Crateranthus cameroonensis, Gilbertiodendron ebo, Kupeantha ebo, Inversodicraea ebo, Palisota ebo, and Talbotiella ebo, have been identified and published (Cheek et al. 2018).

Thirdly, the forest has been home to the Ndokbiakat clan of the Banen tribe for all of recorded history. It is still considered a cultural and customary heritage by this and other adjacent tribes. The forest is full of archaeological history, including colonial roads, stone-built missionary buildings and ancient village sites, the latter abandoned around the time of Cameroon's Independence in 1960. The burial sites of close relatives of patriarchs and matriarchs are situated in these village sites along with other cultural relics that symbolise the culture and tradition of the Banen tribe.

The significance of the Ebo forest has long been attested by the Government of Cameroon, which has supported and facilitated biodiversity conservation and research on a wide range of species in the forest including chimpanzees, gorillas, drills and plants. In addition to granting numerous research permits for projects in Ebo, the Government of Cameroon has also legalised and authorised four grassroots associations: les Clubs des Amis des Gorilles (CAG) in three communities, and the Association des Chefs Traditionnels Riverains de La Forêt d’Ebo (ACTRIFE). The CAGs aim to conserve Ebo gorillas and their habitats through engaging in monitoring threats to gorillas, promoting alternative sustainable livelihood projects to mitigate pressure on the gorillas and other wildlife, and sensitising the general public on the importance of the Ebo forest's unique biodiversity. Under the dynamic leadership of Chief Dipita Gaston (Ndokbiakat clan chief), ACTRIFE has as its goal the conservation of the rich wildlife and cultural diversity of the Ebo forest, and the amelioration of livelihoods in communities along the edge of the forest.

The forest has been a focus for studies by researchers and students from several government institutions. These include the National Herbarium, which has led botanical inventories in the area since 2005; the universities of Buea, Douala, Dschang, Yaounde I and the National Forestry School, Mbalmayo; as well as several researchers and students from universities across the world.

The main threats to the rich biodiversity of the Ebo forest to date include habitat loss, poaching and the bushmeat trade (Abwe & Morgan 2008; Mahmoud et al. 2019). Widespread and systematic timber exploitation across the forest would exacerbate these threats and potentially damage current conservation and research efforts. The Ebo Forest Research Project has been working with a range of stakeholders including grassroots communities and the local government administration to stem these threats (Mfossa et al. 2017).

In a letter to the Prime Minister of Cameroon on 30 April 2020, more than 60 researchers and conservationists with experience working in Ebo argued for:

Setting aside the Ebo forest as an eventual, creditable participatory protected area has several advantages and potential: