Gorillas of the Ebo Forest - Conservation 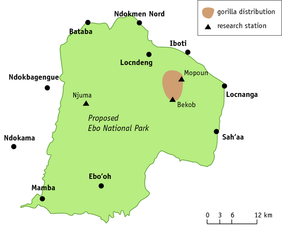 Map of the proposed Ebo National Park (© Angela Meder, adapted from a map by Bethan Morgan)

In November 2002 a population of gorillas was "discovered" in the Ebo forest of southwestern Cameroon, less than 100 km north of the Sanaga River (Morgan et al. 2003). Previous to this, the only indications of possible gorilla presence in the Ebo forest were nests (Dowsett & Dowsett Lemaire 2001; Oates et al. 2003). The Ebo gorillas are an isolated, relict population - their nearest neighbouring gorilla populations to the north are the Cross River gorillas of the Cameroon-Nigeria border region (Morgan & Sunderland-Groves 2004), and the nearest surviving southern populations are western lowland gorillas (Gorilla gorilla gorilla) over 100 km south of the Sanaga river. As such, the Ebo gorillas really are a relict population of what might once have been a much more continuous distribution of gorillas over this region.
The Ebo Forest itself is something of an anomaly. It is one of the most important remaining tracts of closed-canopy forest between the Cross and Sanaga rivers thanks to its challenging topography, and it contains one of the most complete populations of a wide variety of forest mammals in Cameroon north of the Sanaga River despite its relative proximity to Douala, the largest port city in Central Africa and a major hub for both the logging industry and the commercial bushmeat trade. Ebo is home to a unique assemblage of primates: 11 diurnal species including one of the few remaining populations of the critically endangered Preuss's red colobus (Piliocolobus preussi), as well as one of the healthiest populations of Nigeria-Cameroon chimpanzees (Pan troglodytes ellioti) and drills (Mandrillus leucophaeus).
The San Diego Zoo's Ebo Forest Research Project has taken on a new phase in the past two years. We now have three permanently-manned research stations in the Ebo forest. The first station to be established was at Bekob, in April 2005. Today, this station concentrates on the ecology and behaviour of the drill and chimpanzees, although botany research has been ongoing since 2005. The Mopoun research station was established in early 2008 to specifically concentrate on conserving and studying the small gorilla population. We now know that the gorillas only exist in a relatively small (c. 25 km²) area in this region of the forest. Finally, the Njuma research station was established in early 2009 to concentrate research on chimpanzees and Preuss's red colobus monkeys.
The range of the gorillas is very close to one of the largest villages in the region - Iboti. Approximately 200 people live in Iboti, which has a primary school and (currently non-functioning) health centre. While there is a road leading to the village, it is seasonal, and regularly impassable due to rains and mudslides. No public transport operates to Iboti due to the tortuous mountainous nature of the road. Villagers must trek for 8 hours to reach the nearest neighbouring village to the west, from where a bush taxi is available twice a week. Despite this isolation, there is a thriving population, fuelled, for the most part, by the bushmeat trade. The trade has decreased since we established the Mopoun research station and have an increased presence and level of conservation activities in Iboti village, but there is still a good profit to be made from this trade and it is clear that financial motives still outweigh the few law enforcement deterrents that exist.
In November 2009 gorillas were attacked by a local man from Iboti, hunting alone, who came across the gorillas opportunistically and killed one adult male. Before this, the last incidence of a gorilla killing was in early 2006 when we heard through our contacts that hunters from Locnanga had come across gorillas in the forest and "taken the opportunity" to kill a single female gorilla. In both cases, the carcasses were taken out of the forest immediately, and an attempt was made to cover up the details. Nonetheless, we obtained the information and passed it on to our colleagues at both MINFOF and WWF, and while no arrest has yet been made, an investigation is in progress and an arrest warrant has been issued for the alleged hunter.
Despite this incident, there are signs of hope. The reaction within the village to the hunter has been almost universal condemnation. It is clear that the conservation message, especially pertaining to gorillas, is getting through, and that it is no longer socially acceptable to kill gorillas.
In addition, we do see signs of other changes for the better. Some more far-sighted villagers have started to plant farms of foods to be consumed in the village as well as exported. The eternal problem is that bushmeat fetches a higher price per unit weight than vegetable trade, and since all products have to be physically carried out of the village, bushmeat is still the most economically valuable commodity. It is clear that development initiatives must be linked with increased law enforcement if future pressure on the forest's resources is to decrease.
Since our first and second reports to Gorilla Journal (Morgan 2004; 2008) we have discovered that the gorilla population at Ebo is at least as much at risk than previously estimated, if not more so. We still believe that the population is restricted to a very small area of mountains and valleys covering about 25 km² in the north west of what will be the Ebo National Park. Quite why the gorillas have chosen this area is not clear - it is relatively close to the village of Iboti.

We currently think that there are fewer than 25 individual Ebo gorillas remaining, and our best estimate is 15-25 animals. Tracking the gorillas is currently not possible, due to the rockiness of the forest and the lack of tracking knowledge. We are also reluctant to exert undue pressure on the remaining gorillas, and prefer to gather information from secondary sources, such as nest sites and fecal samples. All fecal samples are collected and analysed for dietary information, and genetic samples are also collected from fresh fecal remains. Those samples are currently being analysed for taxonomic, population and individual identification of gorillas by the Genetics Division at the San Diego Zoo's Institute for Conservation Research, as well as the State University of New York's Gonder lab, where the Ebo gorillas are being genetically compared to gorillas further to the east along the Sanaga river.
In 2008-2009 we installed a series of video camera traps in the forest. We have not yet been fortunate to capture the Ebo gorillas on camera, but we have captured moving images of chimpanzees, drill and forest elephants (Loxodonta cyclotis).
In terms of our education initiatives, we have expanded our previous programs of showing wildlife films in villages and bringing hunters to the Limbe Wildlife Center in Limbe, South West Province for wildlife conservation workshops. In late 2009 we started a 1-year pilot program in conjunction with the Limbe Wildlife Centre, studying two of the villages surrounding the Ebo Forest to understand the fine details of income generation and societal attitudes towards natural resource management. We intend this work to develop into a 3-year program, which would target specifically the villages that surround the gorilla population.
In addition, we have recently secured funds from Berggorilla & Regenwald Direkthilfe to produce posters to distribute in the three villages closest to the gorilla population (Iboti, Locnanga and Locndeng), to clearly set forth the reasons for conserving the remaining Ebo gorillas.
These educational activities are being conducted in parallel with continuing efforts to bring the Ebo Forest a new status of national park. The Ebo Forest was designated a "proposed protected area" by the Government of Cameroon in January 2003. Since then, the long and often difficult route towards eventual designation has been followed, but some major obstacles have hindered progress. Much of the Ebo Forest was inhabited until the period of civil unrest that troubled much of Cameroon in the 1960s. The remains of abandoned villages are evident in many of the valleys, and the village "elites" - well-to-do Cameroonians who were born in these villages but spent most of their lives away from the region - have raised concerns regarding the classification of what they regard as their land as national territory.
The delays to allow for discussions and debates on this subject have resulted in a final proposed boundary for the park which would include much of the current gorilla range. In early 2010 a helicopter flyover of the Ebo Forest allowed aerial visualization of the forest for senior Ministry of Forestry and Wildlife (MINFOF) officials and WWF, the technical advisers to the Government of Cameroon for this project.
Another major sign of the increasing public awareness of the Ebo forest as a future national park was the one-hour documentary on the Ebo Forest produced by CRTV (Cameroon Radio Television), the state broadcaster in Cameroon, in late 2009. The documentary, which has been broadcast nationally at monthly intervals, features interviews with members of the local communities and with MINFOF as well as Ebo Forest Research Project staff. Contacts within CRTV estimate that the documentary has been viewed by well over 50% of people in Cameroon who have access to a television, and has thus brought knowledge of the importance of the Ebo gorillas to the Cameroon population as a whole.
The final documents outlining the boundaries for the future Ebo National Park are currently awaiting signature by the Prime Minister, and we hope that this procedure will be completed in the coming months and the next priority will be the development of a long-term Management Plan with secured funding for the Ebo National Park.
We continue to seek strong support in the villages surrounding the Ebo Forest for our work, and tread a delicate line between striving to conserve the forest and its fauna whilst remaining understanding and sympathetic to the concerns of the local peoples. We believe it essential to have a strong physical presence in the forest, in the villages, and with the authorities of the region.
We expect a long period of slow and steady progress with setbacks and challenges at every stage, but we believe that the eventual demarcation of a national park, with effective management strategies accompanied by strong enforcement and education policies, will allow for the development of a protected area of immense long-term benefits for both humans and gorillas.

We work in conjunction with the Government of Cameroon (MINFOF and MINRESI) and with WWF and WCS. This work is possible due to ongoing support from the Zoological Society of San Diego, Offield Family Foundation, USFWS Great Ape Conservation Fund, the Arcus Foundation and the Margot Marsh Biodiversity Foundation, to whom we are extremely grateful.