Gorillas in the Dimonika Biosphere Reserve 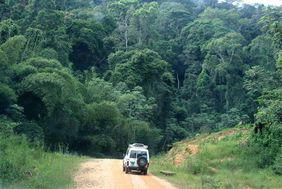 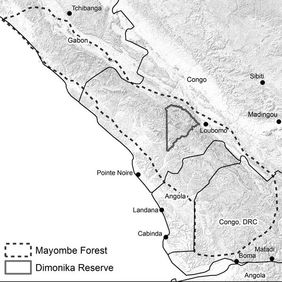 Designated in 1988 under the UNESCO Man and the Biosphere Program, Dimonika Biosphere Reserve is located in the central Mayombe Mountain chain in the western part of the Republic of Congo. The reserve has a spectacular mountainous terrain dominated by beautiful lowland guineo-congolese rainforest and savanna vegetation. Despite its status, very little information is available about the biodiversity and threats in the region. Through the generous support of the U. S. Fish & Wildlife Service's Great Ape Conservation Fund, in 2009 the Jane Goodall Institute (JGI), in partnership with the Ministère de l'Economie Fo­restière et de l'Environnement (MEFE), was able to conduct faunal, floral and socio-economic surveys in the reserve. The surveys were part of the larger effort to establish an institutional frame­work for the design of a protected area network in the Kouilou Region. The survey results were presented last year at the International Primatological Conference in Cancun (Pintea, Latour, Hanni, Tchindongo, Nsafou, Atencia, Pharoah and Cox 2012).

First a JGI survey team conducted a series of reconnaissance walks (recces) within the reserve. We quickly learned that the effort required to survey Dimonika's rough terrain was going to be much more time consuming and labour intensive than imagined, making the logistics and planning for the survey more complicated given the remote location. A sampling plan was designed using Distance software that identified 57 one-kilometer line transects. The field teams were able to collect data along 50 line transects with a total length of 44,590 km. They found old "secondary forest" habitats that have not been industrially logged since the creation of the Biosphere Reserve. Some inaccessible places on very steep slopes still remain quite intact with mature forest, very large trees and clear undergrowth.

One of the major findings in Dimonika was confirming the presence of a population of western lowland gorilla (Gorilla gorilla gorilla) estimated at 113 nest building individuals. Some nests could not be identified to ape species level and the number of those individuals (chimpanzees or gorillas) were estimated at 163. What was interesting was that gorillas were among large mammal species – including chimpanzees, duikers and bush pigs – whose traces (footprints, droppings, tracks, crossings) were the most frequently encountered. This does not, however, reflect the relative abundance of these species across the entire reserve where hunting pressure is very high and constant.

Apart from commercial and subsistence farming and artisanal wood carving, which are generally practiced near the villages and along the major routes, subsistence hunting and commercialized artisanal gold mining are the two primary activities whose impacts are very visible within the reserve. During the wildlife inventory, the majority of the human traces observed were those relating to hunting (animals slaughtered, cartridge cases, hunting trails, signs of passage), logging (old sites) and mining (research, industrial exploitation and artisanal gold).

The core activity in the villages adjacent to the reserve is hunting. It has become a commercialized trade, especially as the villages are located on major roads and have almost permanent customers (merchants of bushmeat, restaurants in the larger villages, officials, employees of the mining sector, public works and logging companies), as well as the means of road and rail transport, and all this makes it very easy to get the bushmeat into urban centers like Pointe-Noire and Dolisie. An example is the village of Makaba: bushmeat traders from Pointe-Noire and Dolisie make weekly visits to this village to buy bushmeat.

It should be noted that hunting tracks, starting from the village, follow the network of old, established logging tracks. Gradually they move deeper into the heart of the forest, and they are then divided into smaller tracks serving various "hunting areas". There are very old logging tracks in both primary and secondary forest, whose use dates back to before the creation of the reserve; these have allowed local residents to enter the heart of this mass of forest and have led to an increased hunting pressure on the wildlife. In this way, these old logging roads continue to serve a network of active hunting trails that are connected to other trails hunters use following certain mountains and valleys.

Mining is another very high threat in the reserve. The village of Dimonika, which gives the biosphere reserve its name, was created in the 1950s by a miner named "Vigoureux", and traces of industrial exploitation of gold can be found dating back to this time. Commercial mining halted in the 1960s, and since then it has mostly been local people who are active in artisanal gold mining. This activity is flourishing in the village of Dimonika, the hamlets of Voula and Ndéguélé (former secondary mining areas), Vigoureux, and the village of Poung. Traces of research and exploitation at smaller sites have been noted in other areas of the reserve. The gold miners' most active area is within the valley of the Loukénéné River and its tributaries. Currently the company MANAGEM is conducting research with the aim of gold exploitation on an industrial scale.

In conclusion, despite its status as a Biosphere Reserve, Dimonika currently has protection only theoretically, on paper, and as such suffers from both an absence of management and high human pressures. This issue is highlighted by the observable signs of hunting which our survey teams found abundantly all over in the reserve: shell casings, snares, animal carcasses and so on, as well as the extensive evidence of artisanal gold mining. Nonetheless, the reserve is still home to important populations of gorillas and chimpanzees and there is a need for urgent action and the development of strategies to conserve great apes and other biodiversity within the reserve and to maintain connectivity within the Mayombe ecosystem.