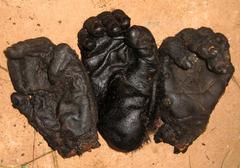 Two men were recently arrested in the Kabo forestry concession in northern Republic of Congo for hunting a gorilla. The hunt was carried out during the closed hunting season, with an illegal weapon, despite the fact that the gorilla is an "integrally protected species," the highest level of protection the law offers wildlife in Congo. The gorilla was killed for bushmeat.

While laws in the Republic of Congo are quite good on paper, putting them into practice is a long battle with many obstacles along the way. PALF, a project collaborating with Congo's ministry in charge of wildlife, is pushing for more rigorous application of wildlife laws. History shows us that very frequently such illegal poachers benefit from a certain impunity resulting from corruption, lack of will to enforce wildlife laws, or lack of resources to apply them. Such a poacher might be arrested, but freed very soon afterwards without even seeing the inside of a courtroom. Without fear of serious repercussions, poachers are unlikely to provide information to authorities about the traffickers who hired them, or those they sell to, either. The ramifications of a weak legal system are endless and make law seem like a joke to law breakers.
Northern Congo is known to have a high density of western lowland gorillas, the most populous of the 4 gorilla subspecies. Populations have drastically declined though in recent decades, due largely to Ebola outbreaks and poaching. Not far away, in March 2011, near where the equator crosses the Republic of Congo, several individuals (presumably of the same gorilla family) were all found dead together alongside a road. An orphaned baby was found sitting amongst the bodies. The poachers responsible were never found. This is clearly an example of commercial bushmeat hunting, as the quantity of meat several gorillas would yield would far exceed the needs of a subsistence hunter trying to feed his family. This is organized and deadly.
A similar case was recorded in late 2010, just before PALF began working in northern Congo. A man wielding an AK-47, obtained illegally from a police officer, went into the forest and killed 3 gorillas (see photo). Even though he was arrested by park rangers, he was soon free, having never been tried in court; and the head prosecutor of the region was not even made aware of the case. This highlights the need for legal follow up in conservation projects in Central Africa as the number of moments when bribes or influence can illegitimately free a criminal is high.
The two gorilla hunters mentioned above were tried and convicted in a special trial, held uniquely for wildlife criminals, organized by the Ouésso court, with the support of PALF. They were both convicted of killing a gorilla and possession of an illegal firearm. One was convicted for previously having killed an elephant as well. A third participant is thought to have escaped but will have an arrest warrant put out in his name. As for the two already sentenced, PALF will continue to closely follow the case to make sure the sentence is duly carried out. If deterring punishments can instigate change, then let us hope than the one year in prison they have been sentenced to (not to mention heavy fines to pay) will teach them and other potential poachers and traffickers who hear the news to think twice before killing gorillas in the future.