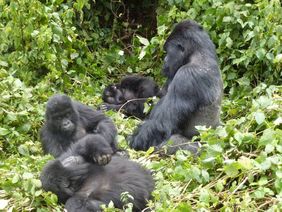 Gorillas spend the major part of their life in small social groups led by a mature silverback male. Only young blackback males and mature silverback males are known to spend extended periods of time ranging solitarily. The composition and stability of gorilla groups varies greatly, both within gorilla populations and among the four gorilla subspecies. For example, mountain gorilla groups studied at the Karisoke Research Center in Rwanda can include as few as two individuals or reach 65 individuals. Western lowland gorillas typically live in breeding groups including several females and their offspring, but also occasionally form groups that do not include any adult female. Understanding the factors responsible for this flexibility has long been a research priority as it relates to the social evolution of our ancestors.

Young gorillas are born and grow up in breeding groups. These groups are typically composed of several, usually unrelated, adult females, their offspring and a single silverback male. Western lowland gorillas, one of the two gorilla subspecies living in western central Africa, form breeding groups rarely exceeding 20 individuals (about 10 adult females). The size of eastern gorilla groups from Rwanda, Democratic Republic of the Congo and Uganda is on average similar to that of western gorillas, but exhibits a larger variability. Mountain and Grauer's gorilla groups exceeding 30 individuals are occasionally observed. At least in the case of mountain gorillas, large groups generally include more than one silverback male. Grauer’s gorillas are not as well known as mountain gorillas, but it seems that multi-male groups are less common in this subspecies. Why can eastern gorilla groups reach a larger size than western gorilla groups? The answer is in the difference between their habitats.

Western lowland gorillas inhabit low-altitude forests rich in fruit tree species. Fruit is a high-quality resource, rich in energy. Depending on the season, western lowland gorillas spend up to 70% of their foraging time eating this resource. But fruit trees constitute small, clumped resource patches that cannot provide enough food resources for large groups of gorillas, which may explain the absence of large groups in western lowland gorillas. Mountain gorillas and high altitude populations of Grauer's gorillas live in forests that are rich in terrestrial vegetation - herbs, shrubs, vines - but poor in fruit trees. In some parts of eastern gorillas' range, such as the Virunga Volcanoes, the terrestrial vegetation is abundant and forms very large food patches that provide enough food for large groups of gorillas.

Adult female gorillas give birth to a single infant every 4 to 5 years. Twin births are rare but have been observed in mountain, Grauer's and western lowland gorillas. Females wean their infants around the age of 3. After 3-6 cycles, the female becomes pregnant again and gives birth to a new infant 8.5 months later. Infant mortality is high: only two thirds of mountain gorilla infants, and only half of western gorilla infants, reach the weaning age. After they are weaned, young gorillas stay close to their mothers for a few more years and are often seen playing with their siblings or exchanging grooming with their mothers.

When females become sexually mature around the age of 8, they have an important choice to make: staying in their natal group or leaving. In western gorillas, young females systematically leave the natal group and then join a solitary silverback male or another breeding group. This behaviour limits the risk of inbreeding, as the silverback in the natal group of a young female is almost always her father. In mountain gorillas, natal transfers are not systematic. The presence of several silverback males in up to half of the groups limits the risk of inbreeding in this subspecies. Transfers are not limited to young females. Parous females (females who have already had an infant) often transfer too. They generally do so shortly after the most recent infant is weaned or dies.

Transfers occur when a group encounters a solitary male or another group. The home ranges of neighbouring gorilla groups generally overlap a lot, so bumping into another group or meeting a solitary male is common. During encounters, silverback males charge, chest-beat, and sometimes bite each other. These displays serve two functions: impressing the other silverback and "seducing" his females, hoping that one of them will decide to join his group. It is important to note that solitary male gorillas do not "take over" groups as is observed in other primates like baboons. The reason why take-overs are not observed is probably because female gorillas choose who they want to live with. If a male they did not like took over their group, female gorillas would simply leave and find another male. Baboon females, on the other hand, are philopatric; they never transfer between groups, which makes a take-over a beneficial strategy for solitary male baboons.

Researchers have found that males with a large body size and a prominent crest on the back of the head have more females than smaller males. It is likely that females who are in a position to transfer compare their current male to other males during encounters, and make a decision by comparing the physical appearance of the males and their ability to "win" encounters. Females may also make transfer decisions based on the size and composition of their current group and possible destination groups.

Male gorillas reaching sexual maturity do not start reproducing immediately. Young males reach the size of an adult female around the age of 8 to 10 and are then called blackback males. Between the ages of 12 and 15, blackback males start developing a grey coloration of the hair of their back. Their body size and muscle mass keep increasing. Mountain gorilla males reach full maturity around the age of 15 while western lowland gorillas reach their mature silverback morphology around the age of 18. In western lowland gorillas, young males leave their natal groups before they turn silverbacks. They typically live solitarily for a few years, until they become able to compete with breeding males and tract their females. Occasionally, young males join an old solitary silverback and form a non-breeding group.

Non-breeding groups usually include 2-8 individuals, but can also exceed 20 individuals, and their composition changes much more often than the composition of breeding groups. In mountain gorillas, young males stay in their natal groups more than half of the time, where they mature and become silverback males. An old silverback male can have in his group several of his sons that have turned silverback; when he dies, the group will remain cohesive, as one of the sons will become the new leader. This is a key difference between mountain gorilla and western lowland gorilla groups: in western lowland gorillas, when the silverback of a group dies, the group disbands and the females join other groups or solitary silverbacks.

Breeding groups have a limited duration of life. In mountain gorillas, a group can include several - generally related - silverback males, and when the dominant silverback dies, another silverback becomes dominant. A few years later, one of his sons may also become the leader of the group and "perpetuate" the dynasty. Groups can thus persist for several silverback tenures. One of the groups currently studied at Karisoke in Rwanda (group Pablo) descends from Group 5, which was habituated by Dian Fossey in the late 1960s.

One may wonder why some young mountain gorilla males decide to stay in their natal group while others prefer leaving and becoming solitary. It is a current research topic for many gorilla specialists with no final answer yet. Several hypotheses have been formulated. It seems that that staying is overall a better strategy for males, as close to half of the dispersers never manage to reproduce. The advantage, however, depends on the context. Staying in a group with only one old silverback seems to be a good strategy, as the young silverback can then expect to become dominant within a few years. Staying in a group with already 4 young silverbacks may not be such a good strategy: in multi-male groups, the dominant silverback sires an estimated 85% of the offspring, subordinate silverbacks only 15% of the offspring - being the 5th-ranked silverback probably gives no chance to reproduce, and in this context, dispersing may be a better strategy.

If staying in his natal group is a good strategy for a large number of young mountain gorilla males, why has this behaviour never been observed in western lowland gorillas? Here again, researchers do not have a final answer. It is possible that the cost of the feeding competition resulting from the presence of additional males would exceed the benefits in terms of support during encounters and protection against predators. Also, as the number of females in western lowland gorilla groups is comparatively low, it may appear difficult for a subordinate male to mate with females behind the dominant silverback’s back.

After almost five decades of research on mountain gorillas and two decades of research on western gorilla social dynamics, we have learnt a lot about the rules that govern the formation and evolution of group groups, but there are many questions that remain unanswered, and the group dynamics of Grauer's gorillas and Cross River gorillas are still poorly known. Gorilla population biology is still an active field of research with important applications in conservation. Understanding group dynamics is indeed critical to anticipate the demographic consequences of human illegal activities and the impact of disease outbreaks.

Our current research on mountain and Grauer's gorillas would not be possible without the support of the Fossey Fund's staff from the Karisoke Research Center in Rwanda and from the Biruwe-Nkuba field station, Democratic Republic of the Congo, and the staff from Kahuzi-Biega National Park in Congo. We are also grateful for the help and support provided by the villagers from Biruwe and Nkuba.