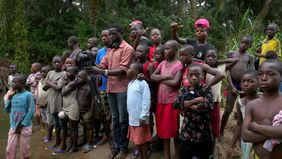 In the Lebialem highlands of Southwest Cameroon, people say that if a hunter kills a gorilla, a person (often a village notable) dies. Connected by a totem, the person and the gorilla share a spirit (Etiendem et al. 2011). In the spring of 2013, a local Fon (chief) died not long after nearby villagers killed a Cross River gorilla (Nkembi & Leke 2013). Folks told us the events were connected. We often hear beliefs and stories like this while working around the habitat of the Cross River gorilla. We rarely encounter them elsewhere.

Most accounts of animals in our collective canon come from a particular perspective. Consider gorillas. They were "discovered" by white explorers, named in Greek, popularized by Western hunters, biologists, and conservationists. Few non-Africans have ever heard an African story about a gorilla (unless they are a close reader of this journal, which has included a few [Meder 1999; Etiendem 2008]).

During colonialism, control over knowledge production and authentication tended to prevent the inclusion of local accounts (Goldman 2007). To be fair, Africans often told colonialists fanciful tales about gorillas, for example how gorillas liked to sit around dying campfires or how silverbacks would steal guns and break them with their teeth or over their knees (Newman 2013). Locals also kept much of their knowledge about gorillas and their relationship with the apes secret, due to its sacred nature (Meder 1999).

Knowledge is not only scientific facts. Local Africans provided colonists and later researchers with information that was important to their own communities: knowledge relevant to relating to gorillas. Local knowledge explained gorilla behaviours and guided interactions between community members and the gorillas. It differs from the objective, impartial knowledge sought by Western science.

When African accounts of gorillas included stories about how to interact with gorillas, they confused Westerners looking just for gorilla facts. Western scientists wanted to study wild gorillas in their natural habitat. They wanted to know how gorillas act when unaffected by people. This position came from a long Western tradition of separating humans from Nature, and of understanding Nature as defined by that outside of human influence. This affected their study. They would not research gorillas as they interacted with the local communities, only as they acted alone out in the forest (Fuentes 2012).

They did not want local anecdotes of encounters but evidence from hard science and careful study. The hierarchy of knowledge meant that many African accounts were lost. When more colourful and un-scientific accounts of gorillas did come, Westerners (hunters, journalists, scientists writing for popular press) presented them. Africans were ignored.

The history of hierarchy among knowledges has repercussions today. As conservationists seek to engage local communities in conservation efforts, to sensitize them to the conservation message, and to justify conservation and its impacts, they explain gorillas and gorilla conservation from a Western perspective (Hill 2002; Lee 2010). This has had limited effect. Conservation feels like yet another Western initiative imposed upon the local community.

Last year, we sought to address this. We, At Films, collaborated with the Environment and Rural Development Foundation (ERuDeF) in Cameroon and the Wildlife Conservation Society in Nigeria, to co-produce a series of films telling local stories about the critically endangered Cross River gorilla (Gorilla gorilla diehli). Each film features a different local community. Our project was about listening. It was about collaborative knowledge production, and the emergent blend of ideas, cultures, and aesthetics created by participatory filmmaking. We worked only as midwives, merely catching local narratives, ideas, and imagery and helping to express and celebrate it as cinema. We made the films with and for local communities to show their accounts of Cross River gorillas, bringing both natural and cultural heritage into conservation efforts.

Fewer than 300 Cross River gorillas remain (Dunn et al. 2014). The gorillas have full legal protection, but their habitat does not. About half remains unprotected. Conservation of the Cross River gorilla depends on the support of local communities. Cultivating an indigenous conservation ethic is as important as establishing conservation protection. We hope our films, ranging from traditional conservation methods (totems and taboos) to contemporary stories, can generate local debates and interest in conservation. Locals can identify with the stories. To them the stories make sense, express their beliefs and values, and teach lessons.

Rather than teach a predetermined morality lesson (e.g. do not cut down trees), we sought to work with each community to determine their own moral concerns. Our local collaborators dictated how moral issues were raised and framed, and how they were addressed. All we introduced was an initial prompt: Cross River gorillas are going away. We invited any sort of thinking: what should we do about this? Is this is a problem? How did you deal with this challenge before?

Participatory filmmaking is an increasingly common practice of co-producing knowledge. The practice takes various forms but the idea is collaborative video production between a facilitator/filmmaker and the video's subjects. The subjects determine the content and narrative of the video. They set, choose, and perform the stories. They are often involved in shooting the video as well. The facilitator usually comes in the most at the level of editing but this can be collaborative too.

We call our method folk filmmaking. The participatory aspects were different for each film but followed a general sequence. First, based on informal interviews and local conservation issues, we would mock up a script and present it to a group of community members and collaborators. They would adjust the script. Then, with their help via chain-referral and other networking, we would collect a cast. Once we had our cast, we all gathered together, read through the script, and again made changes as the cast saw fit. Now we were ready to perform and film the story. We would shoot for as long as our group was available, sometimes just for one day, other times for almost a week. Last we would edit the film, subtitling the local dialect, tweaking montages, checking the scenes.

Each script was little more than a skeleton. Every member of the cast, with remarkable creativity and charisma, ad-libbed and improvised each line and scene. We were overwhelmed and relieved. We worried about having too much of a hand in the process but soon came to see our scripts as merely sparks from which a story - local, unique, and surprising - would grow.

With this project we sought not just to produce films sharing local stories, but also to create a local film team to continue making films after we left. Supported by a Flagship Species Fund Grant from Fauna & Flora International (FFI), we trained and equipped two local conservationist-journalists from ERuDeF, Ndimuh Bertrand Shancho and Immaculate Mkong. They continued to make films after we left and will lead the distribution campaign to screen the series across Western Cameroon.

Each of our nine films addresses a different moral issue related to the loss of Cross River gorillas. Obi and the Juju Forest (Okwa II, Nigeria) tells a tale of traditional conservation, before the whiteman. Conservation Education (Bamba and Wula, Nigeria) presents a modern story of conservation education classes and conflict between a schoolgirl and a hunter. A Message from Oku (Oku, Cameroon) shares what it's like to lose gorillas for good. Chop Gorilla (Mamfé, Cameroon) is a comedy about a gorilla hunter who won't stop hunting, despite arrests by forest guards and protests from his family as Ebola begins to erupt in the news. Nzhu Jimangemi (Bechati, Cameroon) builds on the totem belief to tell a love story. Human or Gorilla? (Njikwa, Cameroon) explores the many threats to Cross River gorilla habitat, including deforestation, trapping, fire, and corruption, through the mishaps of a park ranger. The Cocoa Crusader (Kumba, Cameroon) addresses the threat of cocoa production by following a reporter trying to figure out whom to blame for the explosion of the cash crop and concomitant loss of forest. The Illegal Exploiter (Besali, Cameroon) highlights the temptation and risk of bribery and corruption for the small, rural communities. No Gorilla, No Development (Mmockmbie, Cameroon) struggles with the challenge of balancing community and conservation needs. The films comprise a series, showing both similarities and differences across the communities affected by Cross River gorilla conservation.

Just as local knowledge can teach primatologists much about gorillas, such as where the gorillas occur or what they eat, local knowledge can also help guide human-gorilla relationships. In local beliefs and stories rests an indigenous conservation ethic. Cinema offers a powerful tool for community education and engagement, increasingly utilized by primate conservationists (Wright 2010). Producing the cinema with and for local communities diversifies the knowledge the movies express. The world's wildlife may be our global heritage but we have overwhelmingly Western accounts of wild animals. Local stories not only foster local conservation ethics, they also diversify and enrich our global culture and connection to wildlife as well.

Our project is in its final stage. Our totem film, Nzhu Jimangemi, won the Jean Rouch Award from the Society of Visual Anthropologists. This November we will present it at their annual film festival. Around the same time, our colleague Louis Nkonyu, an integral part of our first two films, will begin screening the series at schools and community meetings in Cross River, Nigeria, supported with a projector from Idea Wild. We hope to launch our Cameroon distribution campaign around the same time but we are still seeking support.

Special thanks to the traditional authorities and people of Bamba, Bechati, Besali, Kumba, Mamfé, Mmockmbie, Njikwa, Oku, Okwa I & II, and Wula for their hospitality, warmth, and support throughout the production process. We also extend profound gratitude to all actors and filming production assistants across the entire series. A tremendous thank you, as well, to the staff of the Environment and Rural Development Foundation (ERuDeF), Wildlife Conservation Society (WCS) and officials from the Ministry of Forestry and Wildlife for all their help and hard work. Finally, a deep thank you to Fauna & Flora International for their faith, encouragement, and assistance; without their support this project would not have been possible.

Fuentes, A. (2012): Ethnoprimatology and the Anthropology of the Human-Primate Interface. Annual Review of Anthropology 41, 101-117

Meder, A. (1999): Gorillas in African Culture and Medicine. Gorilla Journal 18