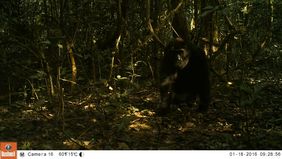 Still from one of the videos

San Diego Zoo Global conservationists working with video traps have confirmed the presence of a small troop of western gorillas in Ebo Forest. Although Bethan Morgan, head of the Central Africa Program for San Diego Zoo Global, first observed these gorillas back in 2002, they had never before been captured on camera or video.

San Diego Zoo Global’s Ebo Forest Research Project includes two permanently staffed research stations, as well as community outreach programs to inspire people to protect their forest and its creatures. One important program for gorilla conservation is the Clubs des Amis des Gorilles (Gorilla Guardian Clubs), a network of community-run clubs near the gorillas’ habitat. These volunteer guardians, with the support and training of San Diego Zoo Global conservationists, monitor the gorillas’ activities and note any threats to them.

From a press release of San Diego Zoo