First Video Footage of the Elusive Ebo Gorillas in Cameroon 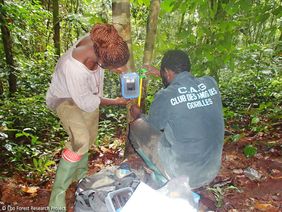 Gorillas were 'discovered' in the Ebo forest in 2002 (Morgan et al. 2003) and since then the Zoological Society of San Diego's Ebo Forest Research Project (EFRP) has been working with adjacent village communities to conserve this unique and small gorilla population (Mfossa et al. 2018). Since 2012, volunteers from three communities (Iboti, Logndeng and Lognanga) adjacent to the gorilla habitat have been monitoring this small gorilla population as part of the 'Club des Amis des Gorilles' (CAG) initiative, raising awareness of the value of this population and promoting alternative sustainable livelihoods to reduce the pressure on the gorilla habitat and secure the gorillas for posterity (Abwe & Morgan 2012).

To minimize risk to these gorillas, all research on this population, including CAG monitoring, use circumstantial evidence (nests, tracks and feeding signs) to determine the behavioural ecology of this population. Even when direct sightings are inadvertently made, observation time is kept to a barest minimum to avoid habituation to humans, since hunting is still prevalent in the area. To further affirm the presence of gorillas in the Ebo forest and thus increase pride in the adjacent human communities, the EFRP and CAG decided to install camera traps across the gorilla habitat, to obtain evidence of the existence and nature of these elusive gorillas.

We had funding from the British Ecological Society - Ecologists in Africa grant for the placement of 30 camera traps in the gorilla habitat. The cameras were systematically placed in an area of c. 30 km² across the gorilla habitat in June 2015 for a duration of 12 months. Every 3 weeks, a CAG-EFRP team serviced the cameras by replacing memory cards and batteries.

The first footage of Ebo gorillas came in January 2016, at last! This and subsequent videos and still pictures captured a total of 8 individuals including a pregnant female and 2 juveniles - there is some hope for the future! In addition to gorillas, we also had footage of chimpanzees, guenons, elephants and duikers that are sympatric with the gorillas.

The first footage of Ebo gorillas was received with enthusiasm by the adjacent communities as well as in the conservation world. The paramount traditional ruler of the Ndokbiakat clan, Sa Majesté Dipita Gaston, exclaimed "at last, we can have the images of our gorillas hanging on our walls".

This was an important milestone in efforts to conserve this unique gorilla population. The results of this project were shared across a wide audience using various media outlets including a film documentary, posters, newsletters and YouTube posting.

The Ebo gorillas are geographically intermediate between the two subspecies of the western gorilla (Gorilla gorilla): western lowland gorilla (G. g. gorilla) and Cross River gorilla (G. g. diehli) south and north of the Sanaga River respectively. The taxonomic affinity of this small and unique population is still uncertain. These gorillas and other species of conservation concern in the area including chimpanzees, Preuss's red colobus and drills are threatened by unsustainable human activities including hunting and habitat destruction through industrial agriculture, logging and mineral exploitation. We hope that a reclassification of the Ebo forest into a national park and sustained grassroots support will preserve the Ebo gorillas and other species for posterity.

We gratefully acknowledge the Government of Cameroon for ongoing cooperation and research permission. Malenoh Ndimbe extends sincere gratitude to the British Ecological Society for providing the equipment funding for this project. We are indebted to all our donors including the USFWS, the Arcus Foundation, the Margot Marsh Biodiversity Foundation, Zoo La Palmyre, and the Whitley Fund for Nature who have supported our work over the years. We also enjoy enormous support for our work and collaboration from traditional authorities from Iboti, Logndeng and Lognanga villages as well as administrative authorities in Yingui - thank you.