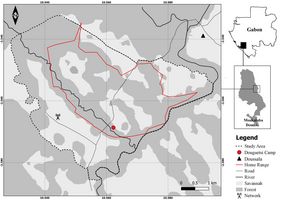 Location of the Douguetsi study site and the home range of the Mussiru group, designed with the MCP method

Despite the efforts of conservation NGOs and research teams, the expansion of anthropogenic activities such as bushmeat hunting, logging, and agricultural plantations - but also natural disasters caused by infectious diseases - have contributed to the population decline of great apes in rainforests (Walsh et al. 2003; Leendertz et al. 2006; Estrada et al. 2018). The amended version of the Red List of Threatened Species published in 2018 by IUCN classified the western gorilla (Gorilla gorilla) as a critically endangered species (Maisels et al. 2018).

It is well known that the habituation of animals is a lengthy and expensive process during which observers are gradually accepted as a neutral element and therefore no longer affect the gorillas' behaviour in the wild (Williamson & Feistner 2003). Due to the extensive amount of time necessary for habituation the financial support can sometimes be insufficient. We believe that tourism would be a possibility to generate revenue in order to make the activity sustainable as soon as the group is habituated. The costs are up to 200,000 US$ per year for the maintenance of the camp and trackways, food rations, rotation of teams, salary, and equipment. When the tourism activity reaches its peak, almost 30 % of the annual costs can be recovered.

Bordered by the Douguetsi River, the Douguetsi research camp is located approximately 6 km from Doussala village along the right side of the Moukalaba River. It is located at the coordinates 02° 22' 11.42" S, 10° 33' 44.53" E, and covers ca. 23.01 km² to the northeast of the MDNP. For more details, see Ando et al. (2008) who described the study site.

During the tracking of the Mussiru group (MUG) under habituation near Douguetsi, the tracking team was made up of four to six people divided into two to three teams of two people each plus one researcher in order to increase the probability of encountering the study group. The group was visited from 7 h to 15 h and we tried to maintain the trace or contact (including direct and auditory contacts). Additionally, we visited the fruiting trees and nesting sites at various locations, as we knew that gorillas sometimes reuse nests and nest sites (Iwata & Ando 2007). The gorilla density is 3 gorillas/km² (Ando et al. 2008).

We followed fresh traces such as footprints, food remains, faeces, nest sites, chest beat direction, and other characteristic signs as long as possible until we encountered gorillas (Tutin & Fernandez 1984; Ando et al. 2008). As described by Ando et al. (2008) for the same study area, the traces could be lost quickly as a result of lack of vegetation in the undergrowth, insufficient feeding remains, and invisible footprints on the hard soil. To estimate the size of the home range, we used the minimal convex polygon (MCP) method with the QGIS version 2.18 software from a Global Positioning System (GPS). We took a measurement at each night's nest site sampled from MUG or at the first contact.

During our reconnaissance patrols in search of MUG, we occasionally encountered other untracked groups as well as solitary males sharing the same study area as the focus group. From these observations we identified at least 9 gorilla groups (including the study group) and 7 solitary males in the habituation area. Because of the replacement of the responsible primatologist in the habituation program, we distinguished 4 periods throughout this process. 2015 (Period 1) marked the start of regular monitoring focusing on the Mussiru group. From 2016 to 2017 (Period 2), the process of habituation proceeded normally; the contact duration was 15 times more in 2017 than in 2016. This period marked the most successful phase of the process of habituation.

In 2018 (Period 3), the financial and technical support for the habituation program was interrupted. This certainly also contributed to a setback in the habituation of the group due to the lack of regular contact. Several trackers left the team during this crucial time because they received no salaries. During this period there was no primatologist in charge on the study site. We suspect that the trackers present on site did not look for the gorillas every day.

In 2019 (Period 4), the activities started up again at full speed, therefore, we had to employ several new trackers. This transition period slowed down the process of habituation as many of the new trackers were inexperienced or had never worked closely with great apes in the past. Although there are other sites in Gabon where gorillas are monitored, it was imperative for us to create job opportunities for local people living in villages adjacent to the MDNP.

Until 2019, due to the lack of detailed observations, the composition and size of the Mussiru group remained unknown. The group’s size obtained from nest counts ranged from 9.33 to 11.93 individuals. We assumed that there were also infants (≥ 3), seen during some rare direct observations, meaning that it is a breeding group. Most encounters occurred in the presence of the silverback male who was still very aggressive when we approached. Other individuals such as females and juveniles avoided us or showed signs of fear as soon as we established contact. The habituation of MUG at this stage remains fragile. However, the results obtained in 2019 are encouraging, and we are thinking of focusing on the silverback male in the future by increasing the contacts and the observation durations, in order to be accepted by him. It is expected that the other members of the group would then change their behaviour towards us.

In comparison to anywhere else in Central Africa, the habituation of western lowland gorillas in Gabon is a special case. This is because it can take a long time - up to 14 years in contrast to mountain gorillas in Bwindi, where the habituation may take only 6 months (Goldsmith 2005). Ando et al. (2008), who worked in MDNP, mention that habituating a single gorilla group ranging from 20 to 22 individuals could take 6 years. It is crucial to secure funding for this process because it is risky leaving such a group exposed to poaching after they have become naïve to human presence.

While we are waiting for the MUG to be fully habituated to be able to open it up to tourism, it is essential for the success of the program to increase its revenue streams. All individuals, research institutions and donors who would like to help finance our activities and/or carry out studies in MDNP and its surroundings are welcome. The MDNP has a unique wildlife diversity in Gabon (see Appendix 1, species list of inventoried mammals from Nakashima 2015). For many species, the conservation status is unknown due to the lack of in-depth studies.

The authors would like to thank first of all the researchers and trackers who helped to collect these data as well as the staff of PROGRAM for their logistical and management support. In addition: the Agence Nationale des Parcs Nationaux (ANPN) of Gabon for the permission to conduct our research in MDNP as well as the funders who have supported this program such as FFEM, USFWS and WWF-Gabon. We are grateful to villages in the vicinity of the MDNP for accepting this project.