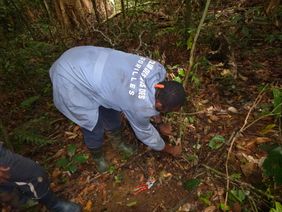 The Ebo forest is one of the largest remaining intact forest tracts in the Gulf of Guinea Biodiversity Hotspot (Morgan et al. 2011) and it is in the process of being upgraded into a national park by the government of Cameroon. The forest is home to a unique primate assemblage including a small population of gorillas, one of the largest populations of Nigeria-Cameroon chimpanzees and drills, as well as one of only two remaining populations of Preuss's red colobus (Morgan 2010).

After the first observation of gorillas by a group of scientists in 2002 in the Ebo forest (Morgan et al. 2003), San Diego Zoo Global initiated a biodiversity research and conservation outreach program in the area called the Ebo Forest Research Project (EFRP). Among other objectives, the EFRP assesses the biodiversity of the forest through annual large mammal surveys and promotes community engagement in biodiversity conservation through partnerships and collaboration with a range of stakeholders in the Ebo forest area (Mfossa et al. 2017). One of the most important of these stakeholders is the ‘Clubs des Amis des Gorilles' (CAG), a network of voluntary ‘gorilla guardians' in the three communities closest to gorilla range.

The CAGs were launched in 2012 and 2013 by the Divisional Officer (Ministry of Territorial Administration) of Yingui Sub Division. The main collaborators of the clubs are local communities and traditional authorities, but they also get support from government services including MINAT and the Ministry of Forestry and Wildlife (MINFOF) as well as elites (Abwe & Morgan 2012). The goal of the CAG is to secure the small gorilla population of the Ebo forest and their habitat for posterity. We aim to achieve this through a number of ways, including monthly monitoring of gorilla signs and threats to gorilla habitat by a joint team of CAG and EFRP monitors. The clubs also engage in conservation outreach activities including sensitisation and sustainable alternative livelihood projects within their communities. After 5 years of existence, we have succeeded in ascertaining the gorilla range in the north eastern part of the Ebo forest. Here we report the results of monitoring activities undertaken from 1 January 2013 to 31 July 2018.

Monthly CAG monitoring in the gorilla habitat was conducted by a team of at least three persons composed of one EFRP staff (technical adviser and lead data collector) and two CAG members from two of the three CAG villages who acted as assistants and/or local guides. The team used reconnaissance transects or recces (Kühl et al. 2008), from one end of the gorilla habitat to another, and spent nights at different temporary camps. At the start of every year, the CAGs in collaboration with EFRP developed an annual monitoring calendar. A copy of this annual schedule was kept by the CAG monitoring coordinator and president of each of the three groups for easy coordination. The number of CAG monitoring days has evolved from 5 days every 3 weeks in 2013 to 10 days per month since 2016. Monthly monitoring was not carried out in December, a month set aside for data collation and reporting.

While in the forest, the team recorded all large mammal signs including direct sightings, vocalisation, feeding signs, nests, faeces, etc. To determine the range and distribution of gorillas across the area, the monitoring teams systematically georeferenced all gorilla signs using a GPS. Given that habituating gorillas and other species may pose a threat to these already endangered species, team members avoided direct contact with animals. Whenever the team encountered great apes, observation time was kept to the barest minimum to avoid habituation. Whenever a great ape nest was encountered, the monitoring team searched the area within 50 m of each observed nest thoroughly for more nests of the same age to determine the size of the sleeping party. For each nest observed, the team leader recorded the tree or herb species used in its construction, the height of the nest from the ground, the diameter of the tree in which the nest was made, the age of the nest, and whether faeces were present. To avoid repetitive counting, each nest spotted was marked with a labelled flagging tape. Whenever present at nesting and feeding sites, great ape faeces were collected in plastic bags and later washed, dried and safely stored for eventual feeding ecology analysis.

To assess the monthly monitoring efforts, the itinerary of the team was tracklogged using the GPS tracklog function. At the end of each monitoring day, the team leader saved the GPS tracklog, logged all the data from the notebook to pre-prepared datasheets. The monitoring team also systematically collected threat indices including spent cartridge shells, wire snares, hunting camps, machete cuts etc. The team deactivated all wire snares and confiscated the wires encountered in the gorilla habitat to reduce the risk of animals trapped in them.

Systematically collecting these data over the years has enabled CAG and EFRP to understand the range of the Ebo gorillas and the threats posed by human activities. Following monthly surveys, monitoring teams briefed the CAG executive bureau of their findings. Quarterly CAG assembly meetings were also held to brainstorm on conservation actions to save the Ebo gorillas. The mapping of gorilla signs and threats posed by human activities have helped the CAG and wider local communities to understand the degree of threat to the gorillas and other species of conservation significance in Ebo forest. This knowledge has been useful in designing focused conservation measures including a participatory and active gorilla conservation strategy geared at prohibiting access to the gorilla habitat. This 'No-Go Zone' (NGZ) idea was a consensus between the CAGs, traditional authorities, elites, MINAT, MINFOF and EFRP, and is one of our active projects at the time of writing.

A total of 325 gorilla signs were recorded during the 469 days of monitoring, with 213 of these signs being nest groups, composed of 858 individual nests. The average nest group size was 4.03 nests/group (range: 1-13 nests/group). Faeces were encountered on 50 occasions, and feeding signs on 32 occasions. Gorilla themselves were only encountered once, in 2016, throughout this five-year period since we deliberately avoided encounters to limit the risk of habituating gorillas to humans since hunting is prevalent across the site and disease risk must be minimized - the gorilla population is small and extremely vulnerable.

Based on the recordings of gorilla signs across the site, we have developed a potential range/distribution for Ebo gorillas mapped from GPS waypoints. This map is being used to develop the 'no-go zone' by the CAGs and local communities. The distribution of gorilla signs across the area seem to confirm our initial estimate of about 25 gorillas in one or two groups in Ebo, ranging over an area of about 25 km².

The teams also recorded and mapped threats to gorillas related to anthropogenic activities. In all, 1381 human signs were recorded, with the most recurrent being spent cartridges (565) and wire snares (334).

There was no seasonal difference in the encounters of used shotgun cartridge shells across the site. More wire snares were encountered during the wet (74 %) than the dry season (26 %). This could be related to the fact that animal signs including trails are more conspicuous in the wet season.

Though snaring and other hunting techniques endanger great apes, we have not encountered or heard of cases of gorilla and chimpanzee killings across the gorilla habitat since the inception of CAGs in these communities in 2012. But potential threats to great apes remain high since human hunting presence in the gorilla habitat continues to be evident. In addition to hunting threats, there is also the threat of the spread of diseases between humans and great apes and vice versa. Gunshots and other human activities in the area may also result in high level stress in the apes that could affect reproductive success in the population.

The monthly monitoring data and gorilla range/distribution and human encroachment maps have been used by CAGs, traditional authorities of the villages and EFRP to develop an active and integrated community conservation approach. This approach is a consensus derived from monthly CAG executive meetings after each monitoring trip as well as quarterly CAG general assembly meetings. These stakeholders are frustrated by the continued existence of hunting activities in the gorilla habitat and by the delay of the upgrade of the Ebo forest into a national park by the government of Cameroon.

Cognizant of the fact that part of the Ebo gorilla range falls outside the proposed Ebo National Park boundary, the CAGs and traditional authorities have proposed limiting human access to the gorilla habitat to protect the gorillas and other species for posterity.

It is believed that such a zone would limit the number of gunshots, snares and other human activities in the gorilla habitat, as well as reduce the potential for disease transmission between humans and gorillas, and general disturbance to the gorillas. The NGZ encompasses the current distribution of the gorilla range based on gorilla signs from monthly surveys over the years. The CAG general assemblies of the three communities have drafted a Memorandum of Understanding (MoU) outlining the goal and objectives of the NGZ as well as measures to be put in place to monitor and punish any illegal and unsustainable activities in the area. The MoU also outlines a range of stakeholders the CAG hope to work with for the successful implementation of this initiative. Among others, the groups have identified traditional authorities, elites, the administration (MINAT and MINFOF), the mayor and councillors, the EFRP, etc. The groups are planning meetings with these stakeholders and would eventually elaborate the roles of each of the stakeholders for the success of protecting the Ebo gorillas for posterity and seeking the welfare of local communities around the gorilla habitat.

Once these preparatory and sensitisation phases are complete, the Divisional Officer of Yingui Sub Division accompanied by the Littoral MINFOF Chief of Wildlife and Protected Areas will officially launch the NGZ in the villages. The monthly monitoring in the gorilla habitat and NGZ would continue following the launch. It is expected that the encounter rate and density of wildlife would increase in the area, and threats linked to human disturbance would decrease rapidly. All human encroachment and trespassing will be reported to the CAG executive assembly, traditional chiefs and local administrative authorities for appropriate sanctions as indicated in the MoU.

The main goal of the Club des Amis des Gorilles (CAG) is to ensure the full protection of the Ebo gorillas and their habitat as well as the rich biodiversity of the forest. The biodiversity of the Ebo forest is increasingly under threat from bushmeat hunting and trade as well as habitat loss linked to subsistence shifting agriculture and industrial oil palm plantations. To reverse the trend, there is a need to mobilize a wide range of stakeholders within and outside the Ebo forest to actively engage in conserving the rich biodiversity of the area. CAG is now yielding positive results based on their commitment for gorilla protection through monitoring and the promotion of small-scale livelihood activities for local population in their villages. The decision of CAG to demarcate and restrict access to the gorilla habitat represents a major stride to protect this unique gorilla population for posterity. This decision has found wide support among other stakeholders including traditional and administrative authorities, elites as well as EFRP. Increasingly, these local communities are recognizing the local, national and international significance of Ebo gorillas.

We are very grateful to the Government of Cameroon for supporting our work, as well as our supporters who continue to provide us their invaluable funding to carry out the monitoring and community outreach work around the Ebo gorilla habitat as well as the Ebo landscape in general. We would like to thank the traditional authorities and the local administration in Ebo region as well as other local NGO partners that all work in synergy for the protection of the biodiversity of the Ebo forest. Particular thanks to San Diego Zoo Global, US Fish and Wildlife Service Great Apes Conservation Fund, the Arcus Foundation, the Margot Marsh Biodiversity Foundation and La Palmyre Zoo.