Can the Mayombe Forest be Saved? 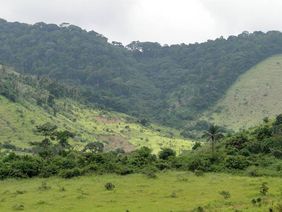 The Mayombe forest ("Maiombe" in Angola. "Mayombe" in Congo and DRC, and as agreed in the transfrontier context, and "Mayumba in Gabon), stretching from the coastal area of the Democratic Republic of the Congo (DRC), through the Cabinda Province of Angola, along the western zone of the Republic of Congo and up to south-west Gabon, forms the southern-western margin of the Congo Basin's tropical rainforest in West and Central Africa, and of the distribution of a large variety of associated flora and fauna species. Among them are such outstanding species as the central chimpanzees, western lowland gorillas and forest elephants.

Despite its ecological importance, the Mayombe forest has been subjected to decades of intensive degradation and biodiversity loss through logging and encroachment, poaching, unsustainable development and mining, and invasive plant species. It still enjoys only very little protection, but recognition of its importance is growing among citizens and decision makers in the four countries that share it, as well as at the regional and global levels. Efforts for its protection are being promoted within the individual countries, as well as at the regional scale, and with international support.

Initial Government conservation efforts of the Maiombe forest in the Cabinda Province of Angola, since 2000, with joint UNDP-NORAD support, were reported in the Gorilla Journal in 2005 (Ron 2005). These efforts were based mainly on stakeholders' sensitization and engagement, with focus on local communities, as well as on other prominent actors, such as the provincial and local authorities and the private sector. A special intensive campaign has addressed the armed forces and resulted in hundreds of soldiers joining the "clubs of friends of nature", undertaking several commitments, among them "I do not eat bushmeat ... with the exception of extreme circumstances ...".

It was through consultations with the communities in these early days, that it became clear that for the conservation of this species-rich, but so fragile ecosystem, cooperation with the neighboring countries is essential. The striking difference in the level of degradation of the forest, within Cabinda and outside its borders, could not be sustainable.

Reported infiltration into Cabinda of loggers and poachers, supplying the illegal traffic networks, has been alarmingly on the increase. At that time, it was the insecurity created by the prolonged armed conflict that paradoxically protected the Maiombe forest of Angola from further degradation over several decades, but it was the same unfortunate circumstances that the cross-border traffickers found comfortable for carrying out their criminal activities.

It was in this same context that the Mayombe Transfrontier Conservation Initiative, aiming to protect and sustainably manage this globally important ecosystem complex, through cooperation between the countries that share it (initiating from its southern part), and through a participatory approach with stakeholders’ engagement, was conceptualized in Angola, some 13 years ago (Ron 2001).

The transfrontier conservation concept was first adopted by Angola, through the then Minister of Fisheries and Environment, H. E. Dra. Fatima Jardim (now Minister of Environment and actual President of the Maiombe Transfrontier Initiative). Two years later, on her initiative, a UNDP-NORAD supported mission was undertaken from Angola to the Republic of Congo, and resulted in the adoption of the initiative by this country, through the then (and actual) Minister of Forestry Economics, H. E. Henri Djombo (Ron 2002). Through a joint effort, both Ministers have convinced their counterpart, the then Minister of Environment, Nature Conservation and Tourism of the Democratic Republic of the Congo, H. E. Jose Endundo, to join the initiative, which first encompassed only the southern part of the Mayombe. In 2003 the concept was presented at the World Parks Congress (Ron 2003), and a preliminary proposal was distributed to potential partners and donors.

The Cabinda Declaration and MoU were signed between the Ministers of the Environment of Angola, Congo and DRC in July 2009. A preliminary project, based on the proposal from Angola, was supported by the Royal Government of Norway, through UNEP and IUCN, during 2009-2011. National funding has been committed since January 2012. Angola offered funding for the initiative’s Secretariat, and some support since then is being mobilized from several additional partners such as UNDP and FAO, while several NGOs continue to support activities in specific parts of the area (namely, WWF, WCS, JGI, HELP-Congo, PALF, and locally-based small NGOs and associations).

More recently, in February this year, Gabon joined the initiative, in the Ministers’ Committee meeting held in Kinshasa, and the transfrontier initiative was thus extended north, to include the full range of the Mayombe ecosystems. Several additional countries have expressed interest in joining the initiative, and thus strengthen it.

A study was undertaken to identify areas for the designation of potential new conservation areas and ecological corridors, and to analyze the conditions for creating the Mayombe Forest Ecosystems Transfrontier Conservation Area (Ron 2011). Further studies were undertaken to analyze land uses and impacts in the Mayombe area (Pintea & Macleod 2011), to identify existing policies and legislation frameworks in the individual countries, and propose recommendations for their adaptation, extension and harmonization, for better enabling the cooperative conservation efforts (Ecosphere 2011). A draft strategic plan was presented to the initiative’s governments, and adopted in February 2013 (Ron et al. 2011).

Several key result areas were identified for urgent action during the next 5 years, among them: establishing adequate and harmonized legal and policy frameworks; creating the required institutional frameworks for management planning through a participatory approach; integrated spatial planning of the Mayombe Transfrontier Conservation Area and of its sustainable management; enabling sustainable economic development; strengthening law enforcement at the national level and through cooperation between the parties; sensitization and education, as well as technical capacity building at all levels; and creating financial sustainability for the initiative’s implementation, based on the party governments' budgetary commitment, as well as on expanding partnerships.

The Mayombe forest, with its associated species, is still subjected to considerable threats and pressures, throughout its range. The conservation of these globally important and fragile ecosystems is dependent on a substantive effort of each of the countries that was privileged to share it, on extensive cooperation between these countries, and on extended regional and international support.

Ecosphere (2011): Legal and policy frameworks. Mayombe Transfrontier Project. Prepared for the Governments of Angola, Congo and DRC, UNEP and IUCN

Ron, T. (2001): SAGA Symposium. The Ministry of Fisheries and Environment of Angola and UNDP: www.saga-jp.org/sympo/SAGA4/4abst/4_oral.pdf

Ron, T. (2002): Transfrontier initiative for the regional protection of the Maiombe forest - Visit to the Republic of Congo, 27.3.-5.4.2002 - A report. The Ministry of Fisheries and Environment of Angola, UNDP and NORAD

Ron, T. (2003): The conservation of the Maiombe Forest, Cabinda, Angola, within the framework of a transfrontier conservation initiative. The World Parks Congress, September 2003, Durban, South Africa

Ron, T. (2011): Potential for designating Protected Areas for conservation and for identifying conservation corridors as part of the planning process of the Mayombe forest TPA. Prepared for the Governments of Angola, Congo and DRC, UNEP and IUCN

Ron, T. et al. (2011): Towards a Transboundary Protected Area Complex in the Mayombe Forest Ecosystems. Five Years Strategic Plan and Roadmap. Prepared with the support of the Royal Government of Norway, UNEP and IUCN. Adopted by the Governments of Angola, the Republic of Congo, the Democratic Republic of Congo, Gabon, Februray 2013