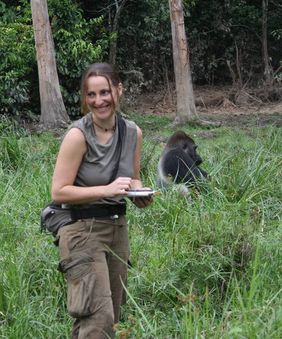 The south-western region of the Central African Republic includes one of the most pristine tropical forests in the whole of Africa. Located in the Congo basin, it remains a paradisiacal habitat, harbouring an exceptional faunal diversity: forest elephants, forest buffaloes, sitatungas, bongos, several duiker species, two species of forest pigs, and 10 primate species besides gorillas and chimpanzees. This great biodiversity and the presence of so many species of large mammals are the treasures of this area. Large mammals are important flagship species that, when endangered and charismatic, have the potential to attract international attention for their conservation.

This article was first published in an earlier version in the Gorilla Gazette 21, 2009

Our sincere thanks go to the Ministries of Education and Water and Forests of the Central African Republic government for permission to conduct this research in the park, to the Dzanga-Sangha Protected Areas and the Bai Hokou staff for logistic facilities and administrative support. I am particularly grateful to the "Primate Habituation Program" directors C. Cipolletta and A. Todd for their support and great contribution. Thanks go to S. Krief and M. Robbins for their collaboration and supervision of the research projects. Special thanks go to the Ba'Aka trackers, for their incredible courage, for sharing their forest knowledge and for their dedication to their work. I especially thank my research assistant, Kemanda Bienvenu Florentin, a student of the University of Bangui, Central African Republic, who was trained in research methods and hopefully will play a long-term role in the future of the Dzanga-Sangha Protected Area projects. Cleveland Metroparks Zoo has greatly contributed to his training by providing funding for his salary in 2008 and 2009. My research was also funded during my PhD by the University of Rome "La Sapienza" (Italy), the Max Planck Society (Germany), and partially by the Zoos and Aquariums Italian Union (UIZA) and the Italian Primatological Association (API). My current research is part of a two-year post-doc supported by the Centre National de la Recherche Scientifique (CNRS) and the National Museum of Natural History (MNHN) in Paris (France).