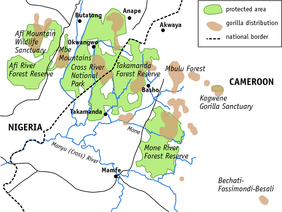 Conservation research on gorillas has, to date, mainly focused on demographic factors, human impacts, and the influence of disease. Genetic data have been primarily used to examine questions related to social structure, relatedness, mating strategies and phylogenetics. Yet when populations are small, genetic diversity and its distribution within a population may be as important as other factors for assessing the overall conservation status of a group of organisms. Reduced genetic diversity as a consequence of small population size or inbreeding may threaten the long-term survival of wildlife populations. However, in the absence of historical genetic data, defining "reduced diversity" is difficult; there is no absolute value below which a population should be considered genetically depauperate.

The Cross River gorilla (Gorilla gorilla diehli) occupies approximately 11 primarily highland sites dispersed across a larger forest landscape in Cross River State, Nigeria and Southwest Province, Cameroon. This gorilla subspecies in particular may be under threat from genetic factors as its population is small, fragmented and may have undergone a considerable reduction in size (Oates et al. 2003; Bergl 2006), numbering only an estimated 250-300 individuals today. We examined patterns of genetic diversity in the Cross River gorilla at both the intra- and inter-population level using data from autosomal microsatellite loci (see explanations of technical terms at the end of this article) derived from non-invasively collected fecal samples. We compared the genetically defined subpopulations of Cross River gorillas (Bergl & Vigilant 2007) to each other, and we compared the Cross River population as a whole to three other gorilla populations (Bwindi, the Virungas and Mondika, Central African Republic). The genetic data from the four gorilla populations were also examined for evidence of demographic bottlenecks (when a population is reduced in size).

Genetic Evidence for Population Bottlenecks
Using genetic data, we were able to detect a significant signal of a reduction in population size in the Cross River, Virunga and Bwindi gorilla populations. The bottleneck signal was much stronger in the Cross River gorillas. This is perhaps surprising given that each of the populations is similar in size. Our data suggest that the Cross River population reduction was quite recent and/or severe (perhaps within the last 100-200 years), while reductions in the mountain gorilla populations were either older or more gradual.
Overall, it appears that though the Cross River, Virunga, and Bwindi populations are equally small, the ways in which they reached their current sizes are different. Two contrasting elements of the Cross River and mountain gorillas' habitat may have influenced the differing bottleneck signals we observed. First, the Cross River gorillas inhabit a large forested area (over 2,000 km²). Much of this area, while currently unoccupied by gorillas, may represent habitat from which they have been recently extirpated (Bergl 2006). In contrast, the two mountain gorilla populations are limited to two relatively small forest areas, each of which is approximately 350 km². The land surrounding the mountain gorilla habitat is the most densely populated area of Africa, and has been cultivated and used for cattle grazing for at least the last 400 years. Second, the Cross River region has a long history of bushmeat hunting (Oates et al. 2004), which likely intensified in the 19th century with the introduction of firearms. Conversely, the hunting of primates for meat in the range of the mountain gorillas is rare, though hunting for trophies and conflict-related mortality have occurred sporadically.
An explanation consistent with these observations and our genetic data is that the Cross River population was recently larger, and the current population size is the result of hunting during the last 100-200 years. This decline may have accelerated as guns became more common and hunting of larger, potentially dangerous mammals more common. A similar situation has been observed recently in Central Africa where the introduction of large bore shotgun shells greatly increased hunting offtake of large mammals. In contrast, the current sizes of the Virunga and Bwindi gorilla populations appear to be the result of a more gradual decline, mediated by the increasing habitat loss due to farming.

Implications for Conservation
Our analysis of genetic diversity in the Cross River gorillas has important implications for the conservation and management of this population. At the within-population level, diversity is unequally distributed between sub-populations. While the peripheral sub-populations contribute to the diversity of the population as a whole, their lower levels of diversity may reduce their prospects of long-term survival. All the Cross River subpopulations can be considered small by mammal standards, and very small populations such as these can be highly susceptible to inbreeding in the short term and suffer from a limited future evolutionary potential. Increasing the variability of these smaller subpopulations must be part of any effort to preserve them.
Two complementary strategies could be applied. First, population expansion, beyond its obvious benefits of increasing census size, will also promote greater diversity. Second, gene flow into small, genetically depauperate subpopulations can drastically increase variability. A single additional migrant per generation could significantly improve levels of diversity, particularly if from a divergent and more variable subpopulation (i.e. the central subpopulation). Such outcrossing of divergent populations has been demonstrated to stimulate recovery of genetic diversity in a wide range of species. Since migration from the peripheral subpopulations to the larger central subpopulation has been documented (Bergl & Vigilant 2007), natural migration in the opposite direction may be possible. Management efforts should foster movement of individuals between subpopulations by maintaining habitat corridors and controlling hunting in lowland areas. Alternatively, the possibility of translocating animals between subpopulations could be explored.
Similar heterozygosity levels for both the small Cross River and large Mondika populations are encouraging. Studies have shown that heterozygosity is important for short-term evolutionary potential (England et al. 2003) and is more representative of the relationship between genetic diversity and fitness than other measures (Keller & Waller 2002). Similarly, the lack of difference in diversity indices between Cross River, the Virungas and Bwindi is promising, since the mountain gorillas (though endangered) are generally considered to be demographically stable (Werikhe et al. 1998). Together these results suggest that the Cross River population is not in immediate danger of extinction due to genetic factors. However, levels of diversity in the Cross River population must be viewed with caution. If the relatively robust heterozygosity in the Cross River gorillas is an artifact of a historically larger population, this diversity would be transient and may be lost quickly if the population is maintained at its current size.

This article is excerpted from: Bergl, R. A., Bradley, B. J., Nsubuga, A. M. & Vigilant, L. (2008) Genetic effects of habitat fragmentation, population size and demographic history on primate populations: the Cross River gorilla in a comparative context. American Journal of Primatology 70, 848-859.